Teen pregnancy is not considered as a serious problem in countries where teenagers are given to be married to old men by their parents. These girls 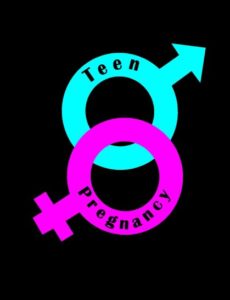 There are various factors associated with high teen pregnancies. In the United States, over 30% of teen pregnancies are witnessed among the most deprived families. Rape is also another contributing factor to teen pregnancy. Rape is common in war-tone societies such Nigeria, South Africa, Syria and South Sudan among others. In these countries, rape contributes to over 20% of teen pregnancies (https://wikipedia.org/wiki/Teenage/pregnanacy). Teen sexual behaviors as portrayed in the glamorous magazines and television shows entice the youths to engage in sexual activities. There are a group of teenagers who are willing to get pregnant to allow them to drop out of school. Some teenagers lack information concerning contraceptives. They engage in sexual activities without information on how to obtain the contraceptives. Some teenagers are forced into sexual activities with their partners without using contraceptives. As such, they fail to prevent pregnancy. Lack of sex education also contributes to teen pregnancy.

Family and peer are also risk factors to teen pregnancy. Girls who do not get much attention of their parents are more likely to become teen parents. Some of the teenagers force their partners to conceive to prolong the relationship. Majority of parents shy away from discussing issues concerning sex with their children. Besides, they fail to provide supervision to the youths. Such parents fail to monitor who hangs around with their children. Lack of parental supervision also lures teens to drug abuse. Girls who are involved in drug abuse risk becoming teen parents. The teenagers who do drugs develop pregnancy and birth complications. Teenagers also get incorrect information from friends, books and the media. Books or movies that depict teen pregnancy as desirable encourages the youth to engage in early sexual activities. They are likely to become teen parents. Friends also provide wrong information that encourages teenagers to make bad decisions concerning sexuality (https://www.livestrong.com/what-are-the-causes-of-teenage-pregnancy).

Teen pregnancy has adverse effects to the youths. Some girls are forced to drop out of school to take care of their children. The teenagers also experience pregnancy and birth complications. Their sexual organs are not well developed to carry the pregnancy to maturity. Some of them experience stillbirth or premature birth. Teenagers who return to school after delivery experience a drop in performance. Teens who are expectant receive acidic remarks from their peers concerning the pregnancy and the kid. In this case, it contributes to illiteracy because they drop out of school for fear of embarrassment and humiliation from friends and tutors. The government loses a lot of revenue to take care of the teen mothers and their children. In the United States, the government spends around $7 billion annually to promote child healthcare and provide assistance to teenage parents. The teen parents are exempted from paying taxes. The government assumes the responsibility to promote their safety and wellbeing.

It is the responsibility of the parents and the concerned stakeholders to assist the teenagers to avoid cases of teen pregnancy. Information concerning sexuality should be provided right from a tender age. Parents should be free to discuss the role of sex organs just like other parts of the body including arms, tummy, and face among others. Children should be encouraged to become comfortable with the names of different parts of their bodies. They should know the differences and similarities of various body parts between boys and girls. The teachers, parents and other concerned stakeholders should inform the teenagers on the effects of drugs and how they contribute to teen pregnancy. They should be taught about the hormonal changes and how they should take care of themselves once they reach the adolescent stage. Parents and teachers should be free to answer all questions concerning sexuality and teen pregnancy. The government and other stakeholders need to reach out and join hands in providing programs that promote parental skills and teen pregnancy prevention.