Tank Man was a documentary photographed famously by Jeff Widener on June 5, 1989. This was a picture taken in 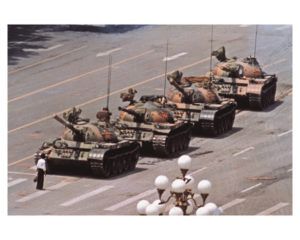 the Tiananmen Square in Beijing, China, and it had been regarded as one of the most popular photos of the 20th century, which symbolizes the fight for democracy and freedom in which Chinese protesters fought against the military and were massively killed.

The photograph is a depiction of a lone man, who is armed with two shopping bags, and defiantly standing in the way of the arrangement of tanks. The image events occurred the day after the Tiananmen Square Massacre, where the military personnel opened fire against the protesters gathered in Beijing. The lone figure standing in the way where the arrangement of the tanks were seen as a representation of the anonymous Everyman, which shows the impact an unknown man can have in spite of the Mao Zedong’s regime that treated people as a mere number out of the millions.

The image looks quite flat in relation to how the four tanks dwarf the man as they were halted in the middle of a broad street. This is a capture of a powerful moment in history. It can also be deduced that the Tank Man is nearly made of muted grays, oranges, browns, whites, blacks, with slight tinges of blue. The repress mixture of the selected earthy colors makes the photograph solemnly realistic in tone, spotting the quietly dramatic nature of the piece. Additionally, the photograph is split in half diagonally with the movement of the tank parallel to the road lines. However, instead of maintaining a sense of balance, the photo composition relies on an unbalanced tension, interrupting the harmony of the piece as the heavy weight of the tanks threatens to surpass the figure of the man.

Attention and Consciousness – Unlearning Through Hypnosis

The Role of Artists in the Art World