The groups within organizations will be made up of people or employees with a common set of objectives, skills sets, work processes, etc. These group of employees needs to take apt and effective decisions for the survival as well as the success of not only the organizations, but also for their group’s sake. Groups involved in decision-making will need to make good decisions from different perspectives. Unlike personal decisions that may affect only one person, i.e., the decision-maker and some others, decisions made by groups will have positive as well as negative impact on whole lot of people including everyone in the group, the organization, customers, etc. Thus, group decisions carry greater risks. The decision-making process must be carried out appropriately, without any room for failure, disagreement, instability, etc. Decision-making is one of the main processes in an organization that can lead to gains as well as failures and losses for the company, depending on how well the processes are conducted and how optimally the final decision is taken. Thus, this research paper focusing on group decision making process will identify and discuss one successful and also one unsuccessful experience with group decision making, concluding with the factors’ that could impact the group’s overall growth and effectiveness. 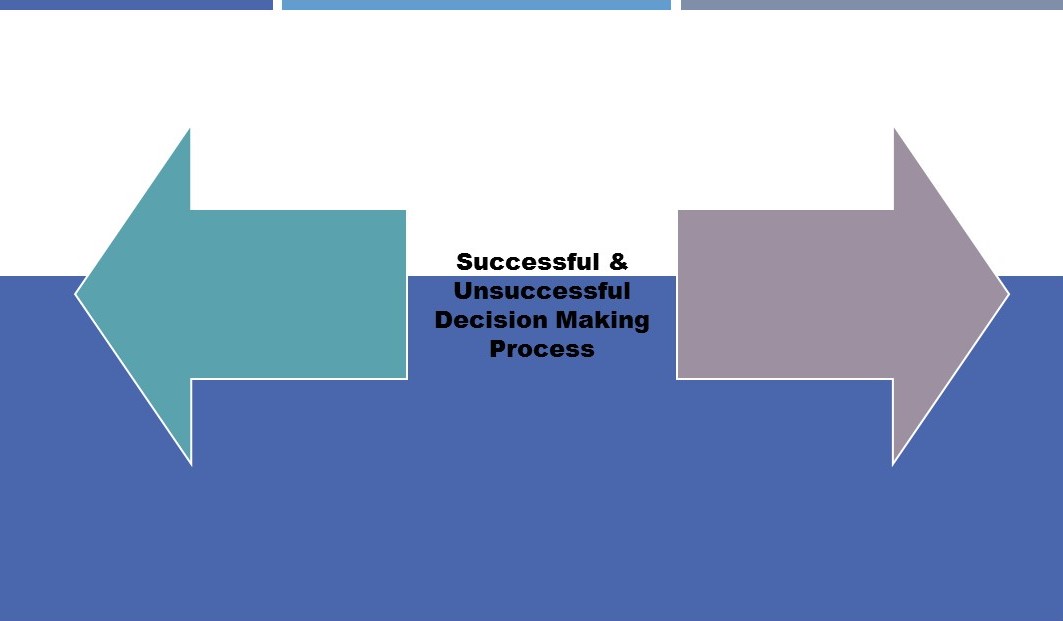 When the decision making process is initiated, collage of factors will come into consideration, including the different views of the management and the workers who are part of the group. These different views, which will come up formally or informally will be ‘congregated’ and ‘condensed’ into a single or main plan. However, ‘condensing’ those views or ideas or suggestions into a single or main plan will not be an easy process, as there could be some impediments in that process. Two of the main impediments that could derail the group decision making process and make it unsuccessful are, when the members in the group are not able to make optimal contributions without any bias, and when the group leader is not able to pick the correct suggestions without partiality. “Decisions may not turn out well, either because the factors that were considered when the decisions were made were wrong or have changed, or there was a fault in the decision-making process, which can happen for several reasons” (Shiller, 1990).  First, contributions to the decision making process could be made by the members of the group according to their personal perceptions.  That is, each person involved in making the decision could provide suggestions based on their education, skills, personal experience, tolerance for risk, etc, etc. In that case, there will be variations in their suggestions. Although, there are chances to elicit common and effective suggestions, there are also chances of getting varied and direction-less suggestions. There will be minimal consensus during these decisions and it cannot be fully implemented throughout the organization. Thus, this type of decision will not be implemented and cannot make any positive impact. In addition, people may lack the skills needed to make complex decisions. Although making decisions at a personal level may seem simple, most group decision making process involves complex features, which necessitates the employees to go in-depth into the decision making process. However, if the employees did not have the requisite skills, knowledge and even patience to go in-depth into the processes, then they will come up with inept and irrelevant decisions. A good decision may or may not lead to a bad outcome, but most bad decisions taken based on poor research, information and lack of applications, would surely lead to not only bad outcomes but more problems. (Redman and Wilkinson, 2001).

In other cases, even if the employees are skilled and equipped to give good feedbacks, the decision making process can still become unsuccessful, if there is too much divergence in their feedbacks, without even minimal consensus. That is, when different views are expressed by members in the group, each will have pros and cons. When a good suggestion from a particular section of the group or from a particular member is given more importance, disregarding the other suggestions, it could be viewed negatively from other sides giving raise to the conflict. Or if a particular suggestion, which is feasible and optimal, is ignored for extraneous reasons, then also conflict will arise. On the other hand, if the group leader or the management team takes a decision single-handedly, without consulting the members in the group, then also that decision could fail and could be difficult to actualize it in the organization, as there won’t be fullest support to it.

On the positive side, if these conflicts are handled aptly, then the decision that will be taken in the end will be of optimum quality. That is, as mentioned above, discussion of different views from maximum persons and the result conflicts, could give rise to different ideas and the best one of those ideas can be picked up and can be implemented. Also, when there are conflicts during decision making, the pros and cons of each different idea will be analyzed threadbare, so, the best idea or plan will be selected. So, if conflicts that may arise during the decision making process are managed optimally, it will surely lead to the formulation of effective strategies and optimal decisions.

Factors’ that Could Impact the Group’s Overall Growth and Effectiveness

Apart from the above discussed operational factors, group decision making process can be made more effective if the physical work environment is also focused. That is, if the employees, who are part of the group, are provided barrier free, open, work environment, they can interact and coordinate in a more effective manner particularly during the decision making process, thereby coming up with effective decisions. In that direction, organizations can go for an open-office layout, with aptly arranged cubicles instead of separate office rooms with doors. As the cubicles can facilitate more face to face interaction among the members of group, more constructive discussions could take place during the decision making processes. This was validated by various studies. “A Cornell University study finds that small-scale, team-oriented offices with few Dilbert-like panels are more effective work environments than private, closed offices because they more readily foster communication, cohesiveness and organizational learning among co-workers” (Lang, 2002).

For any organization to succeed, unison of workers will be the key. This unison of workers in the form of groups and their constructive discussion during the decision making process can lead to creation as well as convergence of more ideas. These ideas or suggestions can be implemented successfully, as the members in the group could contribute more towards it, as it was their inputs. Thus, if the organizations optimally develop the group decision making process, they can achieve optimal success.