Starbucks Coffee Company is the largest retailer and roaster of specialty coffee in the world. It was established in 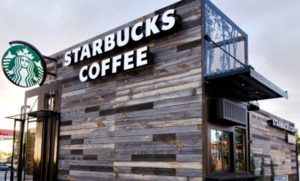 1971 by three partners in the US and has since then spread its operations in over 50 countries globally (Seaford & Brooks, 2012). It expanded tremendously and tripled its stores between 2002 and 2007 from 5,886 to 15,011 respectively. However, its rapid expansion was altered by the recent economic crisis that peaked in 2008. Despite this, the company continued to focus on its expansion goal into the international market. Strong and persistent focus on international sales led to significant growth and expansion of this company during the subsequent years. During the second quarter of 2010, for instance, Starbucks’ profits increased eightfold to $217.3 million. Currently, this company has more than 1700 stores in various locations in the world. It distributes its products in terms of stores and does not sell franchises (Gossage, 2011). Apart from specialty coffee, this company owns other two brands, namely, Tazo Tea and Seattle’s Best Coffee. The company has also invested in the music industry and has been offering various music products and services to customers. This paper presents an analysis of Starbucks through the following topics:

Starbucks’ stores have small, circular chairs and tables that are designed to occupy minimum space. This makes it appear as if there are no empty seats and customers dining alone do not feel or appear lonely. As Simmons (2012) explains, round tables are more informal and comfortable for customers. According to Simmons (2012), Starbucks decorates store interiors to reflect appearance of surrounding neighborhoods. Depending on the character of the surrounding neighborhood, Starbucks selects themes for decoration from: heritage (factory-inspired lighting, metal stools, tile floors or stained concrete and worn wood); artisan (hand-polished woodwork, factory casement glass, masonry walls and exposed steel beams); and regional modern (culturally relevant fabrics and bright, light-filled spaces) (Simmons, 2012).

Starbucks uses music to create an environment that entertains customers. As Simmons, (2012) explains, the company believes that listening to great background music while sipping coffee heightens customer’s enjoyments. The company has invested heavily in entertainment and has even established a music division called Starbucks Entertainment. Starbucks has also been selling compact discs since 1995 (Hajdu, 2006). The company expanded its investments in the music industry in 1999 after acquiring a music company called Hear Music. Today, Hear Music is the sound of the company. Hear Music has bee partnering with famous and emerging artists to provide variety of music to Starbuck’s customers. Hear Music’s compilations and hand-selected CDs are featured in the company’s cafes around the world, at the four Starbucks Hear Music Coffeehouses and online. In 2006, Starbucks teamed up with Apple Inc. and established Starbuck’s section of Apple’s iTunes, offering video downloads and music. The company has also established wireless communication between some of its stores and Apple through AT & T Wi-Fi technology. This implies that customers with computers can download music while listening in the Starbucks stores (Simmons, 2012). Generally, music is one of the key entertainments that coffee lovers enjoy at Starbucks.

Starbuck has established a program which allows customers to load money in terms of dollars into Starbuck cards to be used for future purchases (Gordon, 2011). The amount of money loaded into the card is a prepayment for products and services offered Starbucks stores and in other participating stores, such as Tezo, Teavana and Evolution fresh stores. As part of the program, the company has established Starbucks Card eGift which allows customers to buy and send virtual Starbucks Card through email and social sites. Customers can make purchases using Paypal, debit card or credit card account. The cards make it easier and more convenient for customers to purchase Starbucks’ products and services (Gordon, 2011).  Starbucks uses this program mainly to enhance customer experience and loyalty.

Technological advancement has been changing at an average pace in the food and beverage industry. However, for business organizations to achieve success, they need to follow technological trends consistently and exploit any opportunity that may result from any change or advancement in technology. According to Technorati (2011), Starbucks adopted the recently introduced phone payments system which helps to reduce long queues during peak times.

The use of Starbucks Card is another example of how Starbucks has been taking advantage of advancement in technology. Technological advancement has led to a new platform in form of social media where business enterprises relate with consumers and share ideas and experiences with them. Business organizations are now able to acquire useful data such as consumer interests, tastes and preferences and responses to organizational products and services (Gossage, 2011). Starbucks has exploited this opportunity by creating accounts in the social media sites such as FunsPace and FaceBook where it runs forums to discuss important issues with consumers and communities (Technorati, 2011).

Starbucks is one of companies operating in the global market that have been responsible when dealing with all stakeholders. Starbucks’ key stakeholders include customers, employees, suppliers, shareholders and governments. According to Lawrence and Weber (2011), Starbucks has always been committed to provide its customers with quality specialty coffee. They practice fair trade and provide impressive services to customers that give them as a sense of belonging. Employees of this company fully engage with customers to learn and respond to their requests and interests. The company is committed to providing customers with healthy food with low level of calories such as reduced fats breads. They also entice customers by offering them gift cards and other gift items such as mugs and cups with the company’s logo. In response, consumers in many pars of the world have developed loyalty to the product of this company.

Starbucks’ employees are treated well, as partners of the organization. The company has established the Recognition Awards Employee Benefits Package that provides of various gifts for workers in recognition for good performance. They are offered attractive salary and benefits. The company also provides free training to its employees to equip them with valuable skills needed in the cafe industry (Lawrence & Weber, 2011). The coffee master program and the servant leadership workshops are examples of career development programs sponsored by the company to support employee training.

Additionally, Starbuck has always been committed to ensure that they attain a level of success that rewards the shareholders. They allow the shareholders and new investors to purchase and sell shares of Starbucks common stock Dividends (Lawrence & Weber, 2011). They pay shareholders’ dividends on its common stock at specific set rates on quarterly basis. Starbucks also ensures that there is fare trade between them and suppliers. They encourage coffee farmers to adopt measures that help to protect the environment. They also train them to develop business skills by compelling them to be accountable for their business activities. However, suppliers are required to put in place safety measures for workers that will lead to fair and human working conditions. They are also required to protect the rights of workers through addressing child labour and discrimination and complying with minimum wage requirements.

However, Starbucks has in the past been accused of evading paying corporate taxes in various countries in Europe, an issue that could have an adverse effect on its reputation in the European market (Kole, 2011). Recently, this company has bowed to pressure from the UK government authorities to pay taxes from 2013 henceforth. It is vital for Starbucks should be compliant to such government requirements in all countries where it operates to avoid damaging its image.

Starbucks has enhanced its reputation to the community as a team player. In all places where it does its business, Starbucks has always been striving to make positive contributions to the communities. The company has been contributing by offering employment opportunities to neighboring communities (Ruzich, 2008). Starbuck’s offers a sizeable work force to volunteer in various community services. In 2007, for instance, the company’s workforce, partners and customers in Canada and United States logged 320,000 volunteer hours. The company has plans to increase its contribution to community services. By 2015, Starbucks expects to have capacity contribute more than 1 millions hours of community service annually across the globe. Starbucks has also been providing support to neighboring communities and has been addressing areas such as poverty elimination, literacy and environment (Ruzich, 2008).

Environmental sustainability is one of the key objectives of Starbucks. Since 1992, the company has been establishing innovative ways of minimizing waste from their operations. The company has also been recycling waste products, as a way of reducing environmental pollution. They company has also established “green teams” that develop and implement environmental sustainability initiatives (Lawrence & Weber, 2011). However, concerns have been raised since Starbucks customers often leave shops with their cups and dispose them off in the streets, hence creating a lot of waste. As National Coffee Drinking Trends (2011) explains, cups should be made up of material that is as degradable as possible

In conclusion, Starbucks is one of the successful retailers of coffee at global scale. The success of the company stems from its innovative business and marketing strategies that enhance customer experience. Furniture in the company’s store is designed in a way that makes customers feel more comfortable and less lonely. Decorations are mainly designed based on the characters of the neighboring communities. The company uses a combination of strategies to advertise its products to customers. The use of Starbucks Card is one of the innovative marketing strategies used by the company to enhance customer experience and loyalty. The company has been taking advantage of improvement in technology by adopting the latest technology available in the food and beverage industry to enhance customer experience. As noted in the analysis, Starbucks is one of the companies operating at global scale that have been showing responsibility to stakeholders. The company has also been showing responsibility when dealing with neighboring communities and through active involvement in environmental sustainability. However, the company needs to avoid engaging in issues that could damage its reputation, such as tax evasion. Also, the company needs to consider making cups using material that is as degradable as possible.

The Effectiveness of The ERP system at Starbucks | Weakness & Benefits