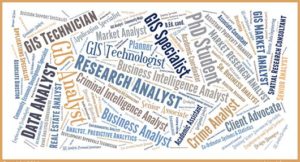 the subject under analysis. It is a geographical method which is used in criminal justice to organize spatial data to allow for statistical analysis. Spatial analysis is used both in a confirmatory and exploratory manner to identify how ecological factors influence spatial patterns in a crime scene (Hart & Lersch, 2015). It involves the use of mapping software known as Geographic Information System (GIS) to map and visualize data for statistical analysis. It is also used to visualize the movement patterns of the criminals. GIS allows researchers and practitioners to create electronic pin-maps that they can use to explore offender mobility and identify crime patterns over space and time.

The primary form of technology used in the spatial analysis is Geographic Information Systems (GIS) technology. Majority of the criminal analysts rely on this type of technology since it is more complex and accurate as compared to other technologies (Hart & Lersch, 2015). GIS has contributed significantly to success in criminal justice. GIS has a lot to do with geography. It has developed to its current state as a result of maps utilized in crime research. Timothy Hart and Kim Michele define GIS as a “computerized system for the collection, storage, analysis and output information that is spatially referenced.” According to Hart, a simple map can be recognized as a GIS. GIS is used as a tool for law enforcement. It is used in crime mapping. Crime mapping has evolved over the years and plays an important role in crime analysis. The maps developed from the GIS technology have played an integral role in the spatial analysis (Hart & Lersch, 2015). Crime mapping began in 1800 and has evolved to what it becomes more complex used by crime experts to analyze crimes and their causes.

During the 1800s, examination of crime levels was based sociological factors and regional relationships. Crime experts developed maps that were used to determine crimes against persons, property, and level of education. According to Hart, most people with high level of education lived in areas with high incidence of property crimes and areas with low incidence of crimes against people experiences a high level of crimes against property. Spatial analysis in criminal justice began in the 19th century in the United States. The country could develop accurate and reliable maps that could be used for crime mapping. The first spatial analysis was conducted in the 1920s and 1930s by various sociologists in the USA (Hart & Lersch, 2015). It was the crime mapping of its kind that was conducted in Chicago. The methods used in the spatial analysis in the 19th and 20th century were simple. The crime experts did not put much emphasis on technology. However, in the 1960s a lot of emphases was given to the use of technology. Unsophisticated and computer systems were used to aid the process.

In the 1980s, crime mapping began to focus on actual crime or criminal as opposed to the criminal offender. During this period criminal mapping shifted to social and physical environments that create opportunities for criminal activities as opposed to criminal offenders (Hart & Lersch, 2015). The researchers started to utilize geographical or environmental factors to determine causes of crime. The client-server technology was the first form of medium technology that was utilized in crime mapping. Subsequently, Drug Market Analysis Program (DMAP) was implemented to map drug-related crimes and their movement over time. DMAP also incorporated GIS to map drug markets and how they were moved from time to time.

In the 1990s, data systems and computer technology were used in crime mapping. More practical approaches were utilized to allow police and other crime experts to carry out spatial analysis. The crime experts installed GIS software in computers to enhance computer memory and aid in criminal investigations (Hart & Lersch, 2015). Crime experts also utilized computer-aided (CAD) dispatch systems to store data. As such, the criminal experts and police found it easy to access criminal incidents electronically. Apart from CAD, geographical information was also made available at no cost to aid in the process of investigation.

The primary function of GIS is to store information by maintaining spatial references. GIS is used to create cartography that makes it easy for crime experts to understand spatial data (Hart & Lersch, 2015). GIS is used together with other applications to obtain locations of crime. GIS is used in the spatial analysis since it can be used in other fields including construction, transport, education and public safety among others.