Social policy refers to public services provided by the government to promote the well-being of its people. The 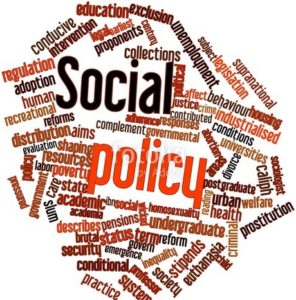 The primary goals of social policy in New Zealand are to eradicate various social ills affecting its citizens. Such social ills include child support, child welfare, family policy, housing policy, social security, economic policy, fiscal policy, mental health policy, and medical health policy. The government of the New Zealand appointed a commission known as Commission for Children in the year 1989 to review child protection and support (Boston& Chapple, 2014). The Commission has established an intersectoral framework to assist them in promoting the well-being of children. It produces quarterly newsletters that are distributed to over 2000 people in the country. The commission also concentrates on the welfare of families. It believes that the well-being of a family contributes to the well-being of children. The Commission does this by looking into the affairs of children. It has developed various principles such as advocacy, representation, participation, and non-interference to address issues which are of significance to children (Boston& Chapple, 2014). For instance, the principle of advocacy requires official bodies to consider the views or opinions of children in decision making. The policy also advocates for gender equity and equal education for all the children.

The Commission is also mandated to look into the affairs of children whose parents have separated. In this case, the decision taken by their parents should not affect their social, emotional and physical well-being. Besides, the principle of advocacy should reduce the harm that the children are likely to experience (Gauld, 2009). The policy also requires various constitutional bodies such as the parliament, court systems, and local authorities to consider the interests of children. The children should have an advocate who argues their case in the Family Court. Besides, the children should also be allowed to participate in legal proceedings where possible.

On the other hand, the principle of representativeness allows those who are responsible for children to influence their lives positively. The policy of representativeness should encourage childbearing culture and promote respect and self-esteem among children. The Commission has also adopted the principle of participation which allows children to represent their interests and speak for themselves in various forums. The principle of participation takes into consideration the difference in age amongst children. In this case, those who are below 16 years old are usually represented by their parents. This also depends on the cultural beliefs and activities of a given community. According to the New Zealand’s Children, Young Persons and Their Families (CYP&F) Act 1989, the decisions of young people should always be considered especially those who are capable of forming their decisions. The act allows the Commission of Children to express the views affecting the well-being of children freely. This is dependent on age and maturity of the child.

However, the Commission for Children has not been able to implement its policies effectively. This is usually caused by cultural, social and economic factors. The social and economic factors which affect the child support and protection include poverty, occupation, and the level of education, ethnicity, occupation and employment (Boston& Chapple, 2014). Cultural diversity in New Zealand bars the Commission from implementing certain policies which are aimed at protecting the interests of children. For instance, some families do not allow children to express their opinions freely. Besides, there are those who lack adequate information on the role of the Commission in promoting the interest of children. As such, the Commission has not been able to implement its functions adequately. Furthermore, poverty has also influenced child protection and support. The guardians or relatives who come from humble backgrounds have not been able to hire advocates to represent their children in the Family Courts concerning various factors that affect their well-being. Such factors may include family separation.

Income is also another vital determinant that is used in establishing health policy in New Zealand. It also translates to the well-being of the members of the society (Lunt, O’Brien & Stephens 2008). Most people in New Zealand who are financially worse-off always do experience several cases of ailments that lead to premature death compared to those who are financially well-off. The increased income inequality and poverty in New Zealand in the last decade has resulted in increased mortality rates. This is because the majority of the population cannot afford quality health care.

Employment is another critical determinant of health policy in New Zealand. Work improves the social status of the citizens. Besides, it enhances their self-esteem and encourages them to participate in various community programs. Work increases other opportunities which help to improve the overall well-being and health of people. On the other hand, unemployment in New Zealand has proved to be detrimental to the health of the citizens. It affects both mental and physical health of people who are not employed. For instance, the National Advisory Committee on Health and Disability (National Health Committee), (1998) confirmed that those who are unemployed had poor health compared to those who are on payroll.

Education also plays a critical determining the goals of social policy. Education determines the economic and social status of people in the society (Humpage, 2015). It also used as a determinant of the health status of members of the community in New Zealand. For instance, according to National Health Committee Report 1998), those who had attained a certain level of education reported good health compared to those who had not attended school. Ethnicity also affects the duration of stay in school. For example, Pacific and Maori regions reported high cases of students who dropped out school without any qualification. This has not changed since the year 1990. Besides, over 20% of adults who comes from low-income families reported poor literacy skills (National Health Committee Report, 1998). Moreover, the majority of adults from minority ethnic groups such as Maori and Pacific have low literacy skills which are below the level required to meet the daily life demands or requirements. Since the year 1996, several students have been enrolled in early childhood education. According to the National Health Committee Report, registration of children between four and three years old increased to 93% and 83% respectively.

The government of New Zealand has also initiated laws that regulate social security. Besides, they provide financial assistance to the aging population. The goals of social policy in New Zealand are aimed at providing adequate housing to people who come from humble backgrounds. The majority of the population who do not have proper housing cannot afford quality education, good nutrition, and essential health services.

Therefore, the goals concerning social policy in the country should always be addressed in such a way that it outlines the social ills affecting the members of the society. Besides, they should address the various determinants of sociology in the society such as social, economic and ethnic factors.