Singapore Labour Market Trends For Graduates From 2007 to 2017

The Singapore booming economy has allowed a record proportion of the resident population to secure various employment opportunities, with notable gains that have been achieved mostly by women and older people. The trend of continued tightening of the labour market in 2007 also resulted in significant increases in the overall income and the reduction in the number of low wages workers. Therefore, following this rapid gains and the record employment rate among the residents, the growth in the labour force eased back in 2007, mainly due to the smaller pool of remaining residents to bring into work. In this essay, we will discuss the trend of the graduate labour market for the past ten years in Singapore (Kang, & Leong, 2012).

According to the study that accounted for differences in the industry and of course, the establishment-size composition decreases the entire spread of the labour share of graduate job-hours across may countries by approximately 54%. Therefore, the residual that is found between the predicted and observed proportions of the graduate labour market varies between 18.3 (Finland) and 12.4 (Indonesia) percentage points. In fact, Indonesia, Austria, Germany, Chile, and Ireland have a relatively large or significant negative surplus, which, on the other hand, implies that the low prevalence of the graduate labour market is not accounted for by the establishment-size as well as the industrial structure. In the same concept, it is noted that there is high graduate labour market in Singapore. Given that this country has a substantial migrant population, SAS excluded the Singapore’s migrant people from the survey to check on just the permanent residents and citizens of Singapore (Pang, Liu, & International Labour Office. 1975).

Influx of Foreign Talents In Singapore

Singapore has a population of about 5.6 Million, and the number of foreign workers has recently increased from around 1, 053, 500 in December 2009 to 1,336,700 in June 2014 according to the statistic figures from the Manpower Ministry. However, the overall unemployment is standing at just under 3%. According to the Singapore residents, the legislature designed to ensure locals are reasonably considered for the jobs is not competent, and that the expats are more likely to work few hours and get promoted faster compared to the Singaporeans.

In recent decades, Singapore became one of the most prosperous countries all over the world. In fact, by the year 2008, the Singapore ports were the busiest and its Gross Domestic Product (GDP) per capita was equal to some countries in Western Europe. By then, it had various strong international trading connections, and its real GDP growth was approximately 7% before the financial crisis that hit in back in the year 2008. In 2008, the total graduate labour market rate increased by about 221, 600 or 8.1%. The overall rate was driven by the steady gain in the first half of that years. However, it was lower compared to the employment rate increase in 2007, which was about 234, 900 or 9.4%. Because of the weakening world economy, the growth in employment slowed down significantly to around 21, 300 in the fourth quarter of 2008. This slow down was felt in many industries in Singapore, which shed about 7,000 workers in this quarter (Rousseau, & Schalk, 2000).

On the same year, the service graduate employment rate grew with about 136, 400 back in 2008. The increase was slightly lower compared to the 143, 100 in 2007. However, the entire growth of Singapore economy in the fourth quarter of 2008, slowed down. 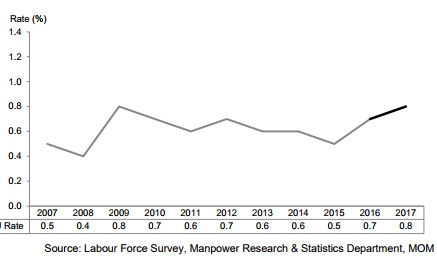 In 2009, Singapore experienced the development and growth of graduate employment due to economic recession for the first time. The entire labour market was more resilient compared to the previous years, which was significantly supported by the Resilience Package as well as the concerted tripartite effort to save employment opportunities. However, in the first half of 2009, there were job losses, but employment rebounded more quickly and also recovered in the second half of that year. In fact, the total graduate employment grew by 37, 500 in the fourth quarter of the year 2009 compared to the second gains of 14, 000 in the preceding quarter. This was higher compared to the 21,300 in the fourth quarter of 2008. The total employment increased in 2009 by 37, 600 which translates to 1.3 %. However, despite the GDP contraction in this year (-2.0%), the local employment increased by approximately 41, 800 or 2.2% in the same year. The entire foreign graduate employment declined by about 0.4% in 2009. The graduate labour market was more resilient compared to the previous downturns, and work started to fall in the first quarter of this year. It was about three quarters since the GDP began to decline in the second quarter of 2008 (Tan, & Institute of Southeast Asian Studies. 1999).

The Increase in Graduates Level

The women and older workers have benefited from the Singapore economic restructuring efforts. Therefore, the participation rate for the labour force of many women with an approximate age of 25 and 64 years has increased significantly over the decade. The entire participation rate for older citizens from Singapore also raised in the same decade. However, they do not have the current education system. The increase in the graduate levels has made the labour market more competitive in the current era compared to some years past.

A thing that was driven by the high employment growth in the 2009 fourth quarter, the rate of unemployment improved significantly, and the overall unemployment rate fell from 3.4% in September to 2.1% in December 2009.

Back in the year 2010, due to the boost by the robust developed economic recovery, the entire proportion of the resident population and also the graduates in employment rebounded to another height in this year. The improvement in the graduate labour market was mostly experienced among the women. The overall economic recovery also lifted the incomes of the workers, with stronger and faster gains in the previous 2009 recovery (Polachek, Pouliakas, Russo, & Tatsiramos, 2017). In 2010, the proportion of the Singapore residents who aged around 25 to 64, where many graduates were found, in employment rebounded to new scores of 77.1% in 2010 from approximately 75.8% back in the previous year. The entire improvement in the rate of the job was widely based on gender. In fact, the record of 71.7% of female in the prime working ages between 25 to 54 was working in this year, up notably from the rate of 69.4% in the previous year.

In 2010, due to the support of the economic recovery, the Singapore residents’ rate of unemployment and also the number significantly improved from the seasonally adjusted 4.5 percent back in 2009 to 3.2 percent in June 2010. The entire improvement in the rate of unemployment was broad-based, and this made it possible to benefit all the education and age group (Lian, & Tong, 2008). 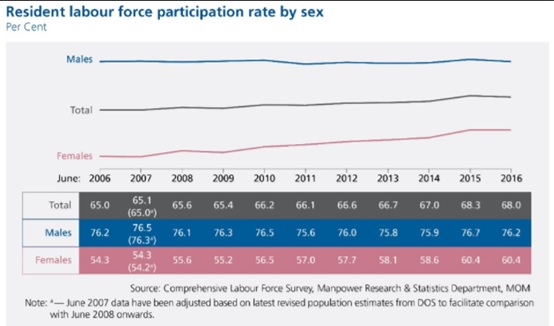 In 2011, the graduate labour market rose to a new high, reflecting the well-sustained improvement among both the female and older residents in Singapore. Due to the tighter graduate labour market, the overall median income of the Singapore residents who worked in a full-time employment improved faster compared to the previous years, even after taking into account the inflation that was present. The growth and development of the resident’s labour force were moderated in 2011 (Lewis, & Murdoch University. 1992). It reflected the absolute decrease in the number of various permanent residents in the population of Singapore. The entire pool of economically active graduates raised over the year by approximately 1.6% in June 2011, which was significantly lower compared to the growth of 3.1% back in 2010.

In 2012, the labour force on the Singapore’s graduate resident grew faster, something that reflected the increase in the labour force of the participation rate to about 66.6% in 2012 from 66.1 in 2011. The graduate labour force in the market improved by approximately 1.9% all over the year to nearly 2.12 Million in June 2012, from the growth of 1.6% in 2011. Due to the rise in the labour force participation rate as well as the continued robust employment creation, the rate of graduate employment improved to another new high. Most people, aged 25 to 64 were employed in this year, reflecting a rate of 78.8% up from 78.0% in 2011 (In Mok, 2017).

In 2013, the rate of unemployment to the Singapore graduates remained low due to the tight labour market. However, the rate of employment creation in this year remained high, which was driven by Singapore locals. Also, the annual average citizen rate of unemployment in Singapore for this year was 2.9 percent. The local employment to the graduates improved more quickly, with approximately 4.0%, compared to the previous years, which indicated a rate of 2.9%. The foreign graduate employment gains also continued to moderate in this year due to the international labour increment (In Lim, & Lee, 2015). 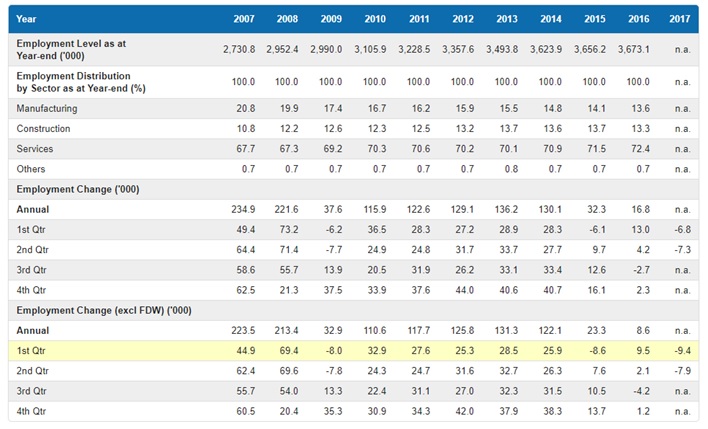 The total employment rate in Singapore back in 2014 increased by about 31, 800, which is, in turn, a rate of 09% increase depending on the Labour Market Advance Release. These statistical data revealed that the entire employment growth was a little bit higher in the fourth quarter of 2015, compared to the previous quarter. However, this was lower compared to the fourth quarter of 2014. On September 2015, the rate of unemployment fell from 2.0% to 1.9% back in December 2015. The local graduate employment growth slowed down after the exceptionally high increase back in 2013 and 2014 (Harasty, Schmidt, & International Labour Office. 2003). The growth in the entire foreign employment also continued to moderate since the year 2011, even though the local employment rate slowed down, the  Singapore residents, as well as the graduate citizen unemployment rates, remained low. Also, there was sustained growth in the overall median income for the workers in 2015. Some employment openings remained higher compared to the total job seekers in Singapore.

Back in the year 2016, the resident rate of unemployment in Singapore increased after holding the steady increase in the previous four years. Most of the unemployed graduates took very long to look for a job, and the job seekers continued to outscore the available job opportunities in Singapore (Di,  Kruse, & Tandon, 2011). The made the redundancies to increase, and the rate of the re-entry among the people who made the redundant decreased in the recent two years. In the same year, the local employment grew, but the foreign graduate labour market contracted. The overall median income for the residents continued to grow all over the previous five years.

On the other hand, during the first and second quarter of the year 2017, the labour market for the graduates have remained mixed in Singapore, having an overall as well as the resident rate of employment unchanged from the previous quarter (Department Of Statistics Singapore. (n.d.). However, the rate of redundancies has decreased. The seasonally changed resident and graduates rate of unemployment in March 2017 remained the same, having 3.2% over the previous quarter. The Singapore graduate’s long-term unemployment rates edged up from 0.7% back in March 2016 to 0.8 percent in March 2017.

The entire graduate labour market outlook in Singapore remains uneven across all the sectors. .Hiring expectations have remained a caution in various industries such as Marine and Construction, while several areas such as Information and Communication, Finance and Insurance, Healthcare and Certain segments of the Manufacturing sector continue to support the growth of employment opportunities (HumanResource., (n.d.). However, with the continued cyclical weakness in various Singapore sectors, and of course, the ongoing business restructuring, the rate of unemployment and redundancies will remain elevated. Those who are displaced from their respective work as well as the job seekers are, therefore, encouraged to make full utilisation of the available Adapt and Grow Programmes provided by the WSG and NTUC-e2i to get jobs or reskill for their new careers (Singapore., & Singapore. 1900).