The body of rules that govern the tax issues relating to off-market share buybacks are found in Division 16K of the Australian Income Tax Assessment Act of 1936. Tax implications in a buyback differ depending on whether the company itself is the subject or the shareholder. Before attempting the question at hand, this paper will first explore the crucial rules and terms associated with the tax implications of share buybacks off-market to set the ground for proper analysis of the scenario.

The process of buying back shares commences when a company makes the decision offering to buy back a certain amount of its shares from shareholders. If shareholders give a nod to the offer, they sell back their shares to the company. The company then immediately cancels those shares from the share register hence reducing the number of shares issued by the company. There are different types of buy-backs that a company can opt for, but the two common ones are equal access and selective. In equal access buy-back, the whole buy-back process is open to shareholders generally, and the terms are the same for all shareholders. In selective buy-back, the offer may be made to selected shareholders or an individual shareholder. 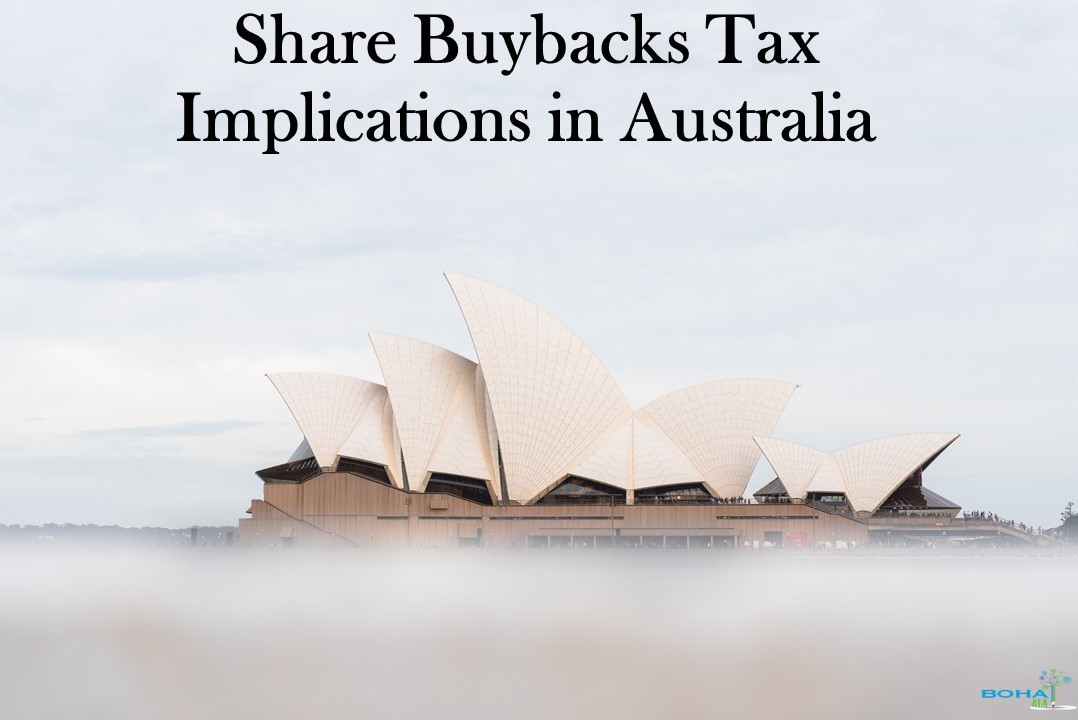 Tax Treatment for the Company

Arguing from the perspective of the company, share buy-backs outside the market are tax neutral because no deductible tax loss or assessable gain is occasioned by the buyback. Consequently, when determining the tax position of the company in this case, the buyback transaction is deemed not to have taken place. In instances where the buyback results in a dividend for the shareholder, the dividend is considered a frankable distribution, which should be franked to the benchmark franking percentage of the company during the franking period for which the payment of that dividend is made. As a result, the franking account of the company should reflect the share buy-back’s dividend component in its debit side.

Tax Treatment for the Shareholder

Based on these issues, this paper will discuss the tax implications for EW Australia Ltd, Duncan and Debbie as a result of the buy-back process.

Any bit of the proceeds of a buy-back debited to the retained earnings account of the company is deemed assessable dividends to a shareholder. Under the franking rules, these dividends can be franked to the extent of the company’s allocation of anticipated or existing franking credits.

For those corporate shareholders who are entitled to an intercorporate dividend rebate, it is important to take note that there could be a resultant double tax benefit because:

The rules of share buy-back outside market also make provision for some adjustments to the buy-back price allocation as a measure to prevent shareholders from reaping the double tax benefit. In addition, these rules provide that share buy-back price is to be treated as consideration with regards to share disposal for CGT and income tax purposes generally. On the contrary, there could be circumstances where the consideration on deemed market value of the shares could be substituted.

The Commissioner of Taxation’s powers to enforce the anti-avoidance rules for franking credit and capital benefit hinder the usual flexibility that companies have in as far as structuring their buy-back proceeds is concerned. Much of recent experiences point towards the Australian Taxation Office’s use of the franking credit rules to demand of companies to restructure their buy-buck proceeds so that inappropriate tax outcome do not arise.

The mechanisms of applying these rules create much uncertainty. The Commissioner can apply the anti-avoidance rules for franking credit when he has reasonable grounds to believe that the company has made excessive allocations to its retained earnings. The Commissioner can also apply the anti-avoidance rules for capital benefit if he has reasonable grounds to believe that there has been an excessive allocation to share capital. Worse still, the uncertainty is increased by the fact that no guidelines in tax rulings by the courts publicly exist to give a clue as to the determination of the manner of allocating buy-back proceeds. Reliable arguments have established that the Commissioner could consider any of the allocation criteria summarized below. The Commissioner has not given any one criterion more emphasis than the rest. Rather, ATO considers each criterion based on the facts and circumstances of each individual case.

This approach is otherwise known as the share capital to retained profit ratio. Based on this approach, a company’s buyback proceeds composition is an impression of the relative proportions of the company’s retained earnings and share capital as at the buyback. Experts have revealed that this criterion is the one that the Commissioner uses most in his determination of the proper allocation of proceeds from a buy-back.

None of the above adjustments would arise if the company sets its buy-back price in such a way that ATO will view the price as equal to the market value of the shares as at the buy-back (assuming no buy-back ever occurred nor was intended). For instance, ATO recently issued the Taxation Determination 2004/22 that outlines its views on the determination of the market value of shares for listed companies that exercise buy-back outside the market.

Financial reward is one way of motivating employees. Business owners are more than willing to see their businesses blooming up in the skies. Giving their staff certain stakes in the enterprise through shares is a kind of incentive and a reward at the same time. Most companies have used this formula. The formula is best known as an employee share scheme. When employees have some stake in the enterprise they work for, they feel motivated and will have a sense of participation. This gives them the urge to work harder so that the enterprise grows. Share options under the employee share schemes are availed to the employees at costs that are normally below the market value of the shares. The difference between the market value of the shares and what the employee actually pays is known as “discount.” The Australian Tax Office treats the discount as income during the assessment of income. Accordingly, the discount is often taxed as part of income.

The legislation on employee share schemes has since changed. This necessitates the distinction between pre-July 2009 schemes and post-June 2009 schemes (that is, there was a change in treatment of the employee share schemes that took effect between the periods). These changes did not appeal to most employers who in turn pushed for reforms. Shares that were acquired prior to the switch are to be taxed based on the provisions of the previous provisions for share schemes whereas shares acquired thereafter are to be taxed based on the new provisions.

One attractive feature of the schemes was the huge allowance to the tune of $1,000 maximum being exempted from tax if the employee in question opted for the taxation of the discounted value of his shares in their year of acquisition. Under the “qualifying” scheme, it was possible for an employee to defer tax until the disposition of the shares if he chose so, but this option came with the detriment of forfeiting the $1,000 tax-free allowance.

As per the new provisions, employees are still liable to pay tax on the discount. This tax applies for the year of acquisition of the shares. However, unlike the previous rules, employees cannot defer the tax save for “real risk of forfeiture” situations and where the employee acquires the interests under some kind of salary sacrifice arrangement. Today, the tax exemption is only available to those whose salaries are below $180,000.

A more limited option to defer has been brought about by the new rules. This option places a time limit of 7 years on the deferring tax, and it is available only where the schemes exhibit a genuine risk of forfeiture or where an employee receives shares worth $5,000 and below under a salary sacrifice arrangement. A genuine risk of forfeiture refers to the fact that an employee is highly likely to lose or never benefit from the shares or their entitlement options under the scheme in question. For instance, conditions may be put for the availability of shares such as the enterprise reaching certain targets in its finances. Alternatively, the risk could occur in a falling market in which the value of the shares is highly likely to fall. Moreover, the risk of the business undergoing liquidation cannot be ignored. However, a condition to the effect that the employee cannot for a certain duration sell the shares cannot qualify for a genuine risk of forfeiture.

Adopted from the Australian Tax Office