The aim of this paper is to examine the quality of the services provided by the Texas Health Arlington Memorial Hospital (THAMH) Radiology Imaging Center through a study of the Current Service Blueprint (Appendix A), which outlines the current service process. It will identify areas of inefficiency that can be optimized to enhance the capabilities and reliability of imaging services available to THAMH patients. It will also recommend the changes that are needed to overcome these weaknesses by providing a Proposed Service Blueprint (Appendix B), which depicts the modifications required to modernize the process and increase the efficiency of the services provided by the radiology imaging center of THAMH.

History and Background of THAMH

The Arlington Memorial Hospital was founded in 1958 to meet the growing community requirements of the residents of Arlington, Texas and was based on a community effort with the objective of providing “high-quality healthcare” to the residents of Arlington (50th Anniversary, 2008). Nearly four decades later Arlington Memorial Hospital merged as a part of Texas Health Resources (THR). THR was established in 1997 through the combination of Fort Worth-based Harris Methodist Health System with Dallas-based Presbyterian Healthcare Resources. Subsequently, in 1997, Arlington Memorial Hospital joined THR, which serves the Dallas-Fort Worth metro area, and is the nation’s third largest hospital systems market, behind only New York and Los Angeles (Roberson, 2008). As of Jan 1, 2009 ‘Texas Health’ will precede the name of the 12 hospitals in the North Texas market and THR will spend in excess of $20 million updating signs and logos (Roberson, 2008). This will firmly identify the link between the high quality hospitals, such as Texas Health Arlington Memorial Hospital (THAMH), and THR, the largest hospital system in North Texas.

Like any other healthcare system today THAMH also faces competition in the provision of healthcare services to the communities it serves from several hospitals that also serve the same areas. These hospitals include the Medical Center of Arlington, USMD, Methodist Mansfield, and JPS in Fort Worth. To offset this competition and maintain its edge in the communities that it serves, THAMH continues to strive for improvement in the quality and the standards of the wide ranging components of healthcare services that it provides. An example of this striving for improvement can be seen in THAMH becoming one of the few hospitals worldwide and the first in Texas to receive the prestigious designation of “Cycle III Chest Pain Center — the highest accreditation possible for treatment of chest pain — by the Society of Chest Pain Centers” (Texas Health Arlington Memorial Hospital, 2009). Such a designation highlights the quality and standard of care provided by THAMH to patients that suffer with heart attacks and cardiac disease among the communities that it serves. This analysis and the recommendations on improving the quality and efficiency of its imaging center is being proposed as part of the strategic goal of continually striving for improvement in the quality and standard of healthcare services provided by THAMH.

The Imaging Center at THAMH

The imaging center at THAMH offers a complete range of diagnostic, interventional, and therapeutic radiologic and nuclear medicine healthcare services. The imaging specialties available at the THAMH imaging center include CT scan, diagnostic imaging, digital mammography, fluoroscopy, mammography, MRI, nuclear medicine, and ultrasound. These services are provided through a radiology department that is staffed by board certified radiologists and radiology technologist staff members. In addition, the THAMH imaging center provides support to a fully accredited independent radiology residency training program. The THAMH imaging center provides services through routine scheduling or on emergency basis, as both inpatient and outpatient, and covers the full range of ages from infants to the elderly. To ensure that these services are provided promptly and when required, the services are available 24 hours a day, seven days a week. Outpatient services are limited to twelve hours a day, from seven in the morning to seven in the evening.

The imaging center availability and staff manning these modalities at THAMH are well suited for providing high quality imaging support for the healthcare service provided by THAMH. However, any healthcare organization is only as strong as its weakest link in providing services to its patients. An analysis of the current process via the Current Service Blueprint (Appendix A) of the service process suggests that there are significant gaps in the provision of services at the imaging center, which need to be addressed to improve the standard of quality service that THAMH keeps striving for.

The Current Service Blueprint (Appendix A) pertains to the current radiology outpatient scheduling and report process at THAMH. The service blueprint shows an overview of the process that takes place from the time a physician’s office calls in an order for a patient’s imaging procedures until they receive the final diagnostic report.  During the analysis of the current imaging center scheduling and reporting process at THAMH, two areas of inefficiency became apparent, which are due to the service design. The first area is in the multimodalities decentralize scheduling process and the second is in the process in which the imaging reports are created.

The first encounter of this process is between the physician’s office and the specific radiology exam area, which takes place via a phone call from the physician’s office. The order is then communicated from the exam area to the radiology outpatient front desk, in which a schedule confirmation is communicated by either fax or a phone call back to the ordering physician’s office.  The Current Service Blueprint (Appendix A) illustrates that the current process requires the physician’s office to call multiple areas, and make repeated calls, for an imaging order request. Often, these initial calls are not answered due to the unavailability of the staff, which may be busy in the examination area with patients. There is also the recurring problem of lost orders in each exam area after the order has been faxed from the physician office, which has contributed to numerous delays in the scheduling procedure. Another major problem with the current decentralized scheduling process is that each individual exam area is not consistently communicating with each other. For example, if a patient happens to have two radiology procedures scheduled on the same day, there is no system to coordinate the appointment times. The net result is that the scheduling system is inefficient and not sufficiently consistent to sustain THAMH’s target of excellent quality and high standards. This service design shows an imbalance in the service triangle in delivering the service as promised to the ordering physician’s offices.

In addition, the current reports process of the raw verbal data dictated by the radiologist is a very unreliable, inconsistent, and lengthy process.  It has contributed to numerous delays in ordering physicians receiving final reports. The major contributing factor to the problems in the current reporting process is that the raw verbal data has to be submitted into the RIS/HIM system in order for the transcriptionist to dial in and type the draft report. The finished report is then placed in a queue where it waits for the radiologist to review, approve, and sign. The signed report is then manually forwarded to the radiology clerical staff, before being sent to the ordering physician either by fax, courier, or mail. This lengthy reporting process may reach the ordering physician as fast as thirty minutes from the time the report was signed and approved, or it may take several hours. This not only presents a delay, but also projects an image of unreliability and a lack of system control. These imaging reports are crucial in the diagnosis of the patient, and delays in the required interventions significantly detracts from the respected reputation of the high quality service offered by the imaging center at THAMH.

The radiology management team should also implement a voice recognition system, such as RadWhere, for their imaging report process. This voice recognition system allows the initial raw verbal dictation from that radiologist to be digitized and typed, which will eliminate the bottleneck that the current process has between the transcriptionist dial in and the radiologist signing and approving the final report. The voice recognition system would not only help expedite the final report to the ordering physician’s office, but would also be a major cost saving for the organization as the current transcriptionist contractor could be eliminated. The final signed report would be directly submitted to the ordering physician’s office by the radiologist without having radiology clerical staff involvement.  Overall, the most noticeable effect of this implementation would be that the reports would be submitted immediately after the radiologist’s dictation. This is in contrast to the current process; which may take from 30 minutes up to several hours for the ordering physician to receive final reports.

The essential features of speech recognition software, with regards to hospitals, is that it eliminates the excessive turnaround time, and is a convenient means of producing medical documentation in a digitized format for electronic health records. These can then be immediately reviewed and corrected by the author at the point of dictation. Speech recognition increases the efficiency of the creation of health records, and reduces the strain on the concerned medical professional, which ultimately saves money for the hospital (Philips Speech Recognition Systems, 2008; Nuance care, 2009).

The benefits accruing through the use of speech recognition software in report generation can be summed up as:

The recommendations for improving the services provided at the imaging center at THAMH involves the implementation of a new centralized scheduling process in conjunction with the RadWhere voice recognition software for report generating and submission. With the implementation of these recommendations, the radiology imaging center’s inefficient order placement system, and the time delays in generating reports of image examinations, will be eliminated. In addition, the proposed changes in the Proposed Service Blueprint (Appendix B) of the radiology outpatient scheduling will assist THAMH to hone its competitive edge in facing the many competitors it has in the market of Arlington and the surrounding communities. 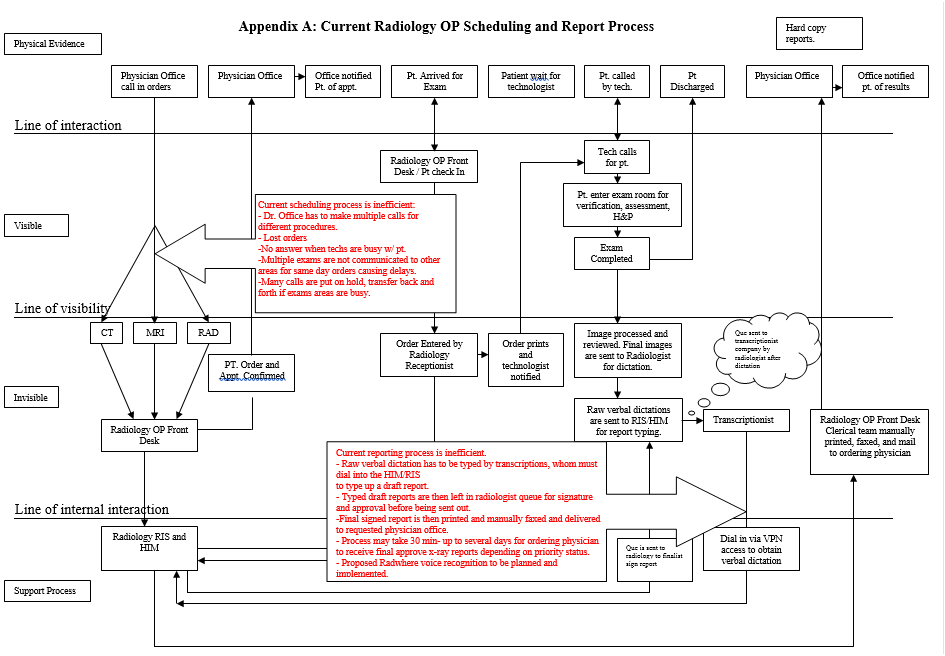 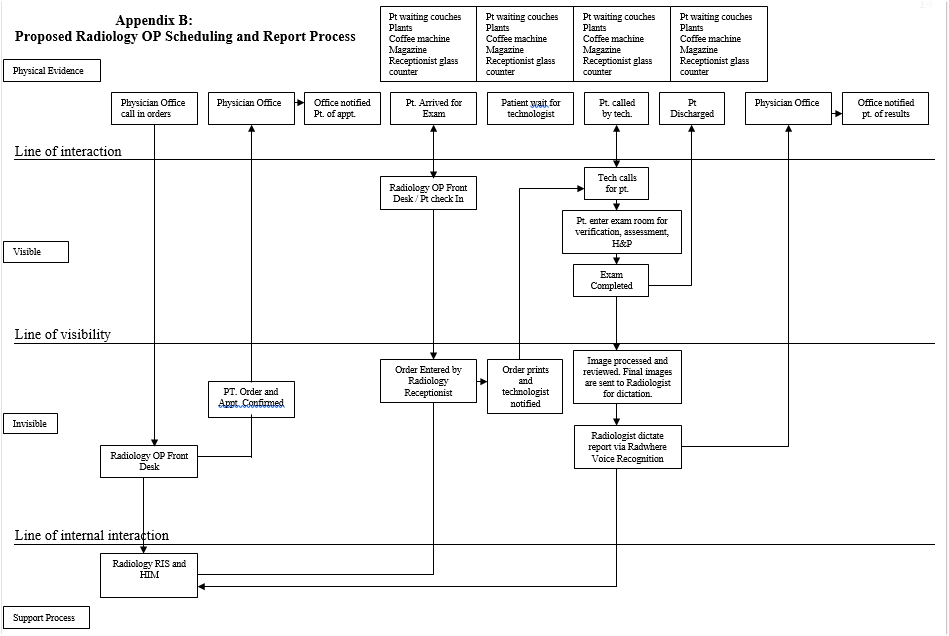