Home > Projects/Reports > Season of Migration to the North Novel Analysis

Season of Migration to the North Novel Analysis

‘Season of migration to the north’ is a Sudanese post colonial novel written by Tayeb Salih. The novel is a tale of two parallel postcolonial characters.  The anonymous narrator returns to his native home Sudan after spending seven years furthering his education in England. In his village, he encounters Mustafa Sa’eed, a villager who is less concerned about his achievements unlike the others. Mustafa Sa’eed recites a poem in English while drunk and betrays his past. The narrator resolutely discovers their similarities with Mustafa who likewise studied in Europe although he violently harbors hate of his western acquaintances that had a complex relationship.  He in fact confessed killing his British woman while in England and exploited a number of them sexually where three of them committed suicide. The narrator’s discovery of Mustafa’s experience in England triggers anger, curiosity, and despair in him. Mustafa drown in River Nile and disappears mysteriously leaving the narrator to take charger of Mustafa’s wife and his two sons. The novel emphasizes on the troubled past of Mustafa in Europe where he hunts a number of women and finally falls for a British woman. His marriage with the woman is consummated with violence and imprisonment. He finally moves to his village in Sudan along the banks on Nile where he remarries and bears children. Mustafa is used to reveal the narrator’s past indirectly where he befriends him and makes him his sons’ guardian and his enigmatic life repository before committing suicide. The narrator is passive and is subdued by sought of a concealed relationship with parents and villagers. The novel touches on sexual mores, status of women, colonial arrogance and Sudan’s Independence. 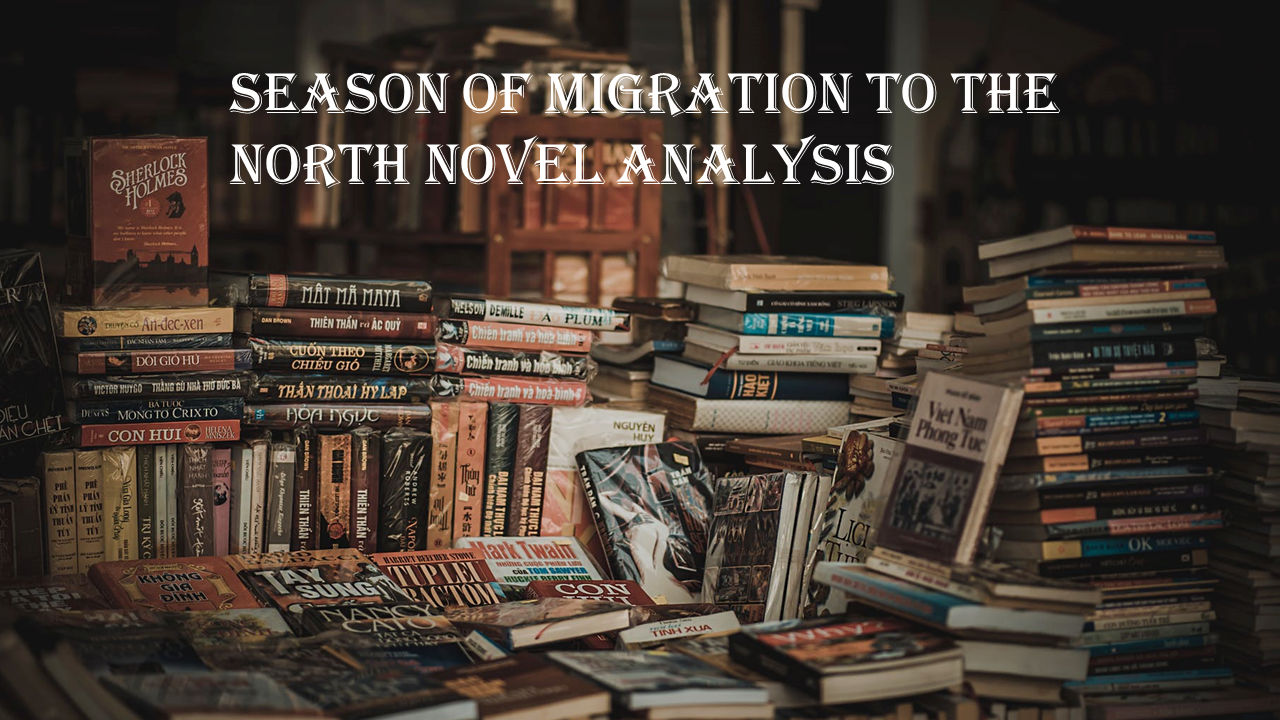 ‘Season of migration to the north’ attempts to lay criticism on imperialism as a way to expose it. The title north is used not only as a direction but an ideology. “In her eyes I was a symbol of all her hankerings. I am south that yearns for the North and the ice” (Salih 30). This  shows the icy nature of Mustafa since he is portrayed as having no emotions or feelings showing the competitive nature between South and North for instance “ I was like something rounded, made of  rubber: you throw it in the water it doesn’t get wet, you throw it on the ground and it bounces back” (Salih 20). “…a southern thirst being dissipated in the mountain passes of history in the north” (Salih 42)  portray Mustafa’s  desire to leave  South and become part of North and his attempt to do this by marrying a Briton, leads him in Jail and ends up in Sudan or South. However, he did not entirely detach from north since he had photographs, collection of books for study and spoke fluent English. Alienation hunts the narrator until the end. The author condemns the effects of colonialism. The life of Mustafa tells the nature of contamination and cultural contact between British which is the former colonial power of Sudan. The sexual exploits upon women could be vengeance towards the British colonizers as noted “This is a fact in my life: the way chance has placed people in my path who gave me a helping hand at every stage,, people for whom I had no feelings of gratitude: I used to take their help as though it were some duty they were performing for me” (Salih 23). His misapprehension of his inviolability indicates the consequence of attempt to be assimilated in civilization as contradicted by his culture.  Sa’eed’s mind absorbed Western civilization which in turn ended up breaking his heart. This shows an opposition between civilization or West and savagery or Africa which could not unite due to the differences in economic, political and social status.

Individuals who have developed inferiority complex as a result of colonization try to imitate the west as in the case of Sa’eed who comes to realize that no level of education would equalize him and ‘them’. From the novel, Mustafa Sa’eed remained colonized “The language, though which I now heard for the first timer is not like the language I had learnt at school. These are living voices and have another ring. My mind was like a keen knife. But the language is not my language; I had learnt to be eloquent in it through perseverance” (Salih 28 &29).  Realistically, Sa’eed could not be accepted in the dominant western culture in spite of his education. He is impressed as having overcome primitivism by the English. As a result, he lives a paradox in assimilation which distances him from his natives and never becomes equal to ‘them’. Therefore, Sa’eed seduced and left English women and murders his own wife as atonement to reciprocate his moral exile. For instance when he is asked by Isabella Seymore if he was Asian or African, he replies: “I’m like Othello…..Yes,’ she said: ‘Your nose is like the noses of Arabs’….’Yes, that’s me. My face is Arab like the desert of the Empty Quarter while my head is African and teems with a mischievous childishness” (Salih 38) Sa’eed’s response shows that he recognizes the attitude of the English towards their colonial subjects.  Sa’eed points out referring to Isabella  that “….There came a moment when I felt I had been transformed in her eyes in to  a naked, primitive creature, a spear in one hand and arrows in the other, hunting elephants and lions in the jungle” (Salih 38). The statement is a reflection of Isabella’s tales regarding Africa which stereotyped him as primitive. This is racial discrimination which made Mustafa who stands for the colonized society to suffer emotionally contributing to low self esteem. Isabella as a woman represents the colonizer who regarded the colonized as primitive.

Sa’eed becomes violent and during his trial, he states that “Yes, my dear sirs, I came as an invader into your very homes: a drop of poison which you have injected into the veins of history. I am no Othello. Othello was a lie” (Salih 95). Disclosing his identity reveals that he has finally accepted his culture and is willing to fight for it. Professor Maxwell Foster-Keen who was Sa’eed’s former mentor and he defends him in court stating that “You, Mr. Sa’eed.., are the best example of the fact that our civilizing mission in Africa is of no avail. After all the efforts we’ve made to educate you, it’s as if you’d come out the jungle for the first time” (Salih 93&94) this is a clear and a straightforward reflection of colonial ideology rather than crime he had committed. He suffers seven years imprisonment and finally moves back to his home country, Sudan in a primitive village near the River Nile. The women were not murdered by Mustafa Sa’eed but rather by the deadly economic, cultural and political disease infected from the colonial invasion. Sa’eed reflects a colonialism convert who failed. He recognizes that he is an intruder, a colonizer of civilization and an exile from his natives reflecting the unstable relationship between Africa and the West.

Season of migration to the north portray the adverse relationship between the colonizer and the colonized. Irrespective of the effort to become westernized, there is no way that the two cultures could integrate and become one whatsoever. There exists cultural conflicts since the Africans, in this case, Mustafa, after suffering rejection and discrimination decides to stand for status quo and engages in revenge mission. To compensate for the pain he has suffered while in the West, Mustafa harasses women sexually who ends up committing suicide because of him. His engagement with women represents the marriage of the two different lifestyles that could not match irrespective of the efforts invested in the union. Unsuccessful literal marriage between Mustafa and his British wife reflects the incompatibility of the two cultures. This way, the author portrays women as the weaker gender that becomes victims of the circumstance. The novel is a clear reflection of the political conflicts that existed at the postcolonial time between the colonizers (British) and the colonized (Sudan). Efforts made to civilize the colonized society were nullified although some aspect of alienation stuck making a dent to their culture. The efforts to become civilized did not come easy else, it involved bloodshed, suffering and imprisonment as experienced by suicide of the women, murder of Mustafa’s wife and his ultimate imprisonment. This portrays the adverse effects that resulted from colonization which spoilt the relationship between the two societies.

An Analysis of Factors Influencing Adoption of Broadband Services: A Case Study of South Wales

Advantages and Disadvantages of Diversity