Rhetorical Strategies – Using Ethos, Pathos, and Logos in an Argument

There are three modes of persuasion coupled with the spoken word. They include pathos, ethos, and logos. They help the speaker to appeal to the mind and emotions of the audience (Dlugan, 2004). Ethos deals with the character 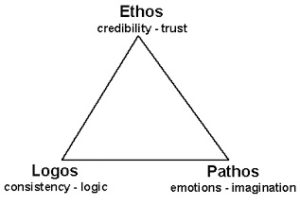 and the integrity. Pathos involves stirring up the emotions of an individual through pity, anger, fear, and hope. Logos consists of the use of argumentation. It entails statistics, data and all possible terms that can be used to prove an argument. In addition, logos are based on logic, reason, and facts. It must point out at the evidence that people can witness (Higgins and Robyn, 2012).

Logos is the appeal to logic. The speaker must rely on the intelligence of the audience to find credible evidence that can be used to support the argument (Dlugan, 2004). The evidence must be based on facts. Facts are considered valuable because it is a representation of the truth and is not debatable. The argument must also be supported with examples of circumstances that can relate to the audience. Logos also utilizes precedents and authority. Precedents are particular historical examples from the past. The speaker must use authority to qualify the topic or the subject (Higgins and Robyn, 2012). Logos must also use deductive or inductive reasoning to conclude. The speaker must use logical pieces as part of the evidence to reach a conclusion. Logos enables the speaker or the writer to uphold the information by basing it on facts.

Pathos is an appeal to emotions. It is useful when an individual is discussing an emotional topic. However, it is only effective when the speaker uses moderation to appeal to the emotions of the audience (Dlugan, 2004). If it is over-done, the argument loses it meaning. Pathos is only effective if it is used in conjunction with logos and pathos. Pathos is helpful in writing because it enables the writer to understand that the audience has intellect and emotions (Higgins and Robyn, 2012). For pathos to be effective, the speaker must use appropriate connotations to appeal to the emotions of the audience. Connotations are words with secondary meaning and connotations. Pathos is an appeal to emotion. As Aristotle has noted, “to understand the emotions that are, to name them and describe them, to know their causes and the way in which they excited.” (Higgins and Robyn, 2012). The speaker can develop emotional connectedness by organizing his thoughts and position by using vivid storytelling and humor (Dlugan, 2004). In addition, the speaker can use descriptive language by emphasizing the words and themes of the topic emotionally.

Rhetorical strategies have influenced my perception as a writer. Besides, I can apply them in different potential academic courses. The ability to demonstrate in conjunction with logical and strong arguments enables the audience to consider as prepared and knowledgeable about the topic (Higgins and Robyn, 2012). Furthermore, my ethos will be raised because of the pure intentions of preparing a convincing argument. High ethos will also enable me to receive less opposition because of presenting logical arguments. Ethos will allow me to present facts and claims that can be relied upon. I would quickly gain the confidence of my audience, and they would find it easy to believe me. As such, I would be more persuasive since this the most important trait that is required of a public speaker or other potential academic courses. I can apply logos in other potential academic courses since they would make my argument understandable, logical and real. This because I will base the arguments on concrete examples and facts that people will tend to accept quickly as opposed to general and abstract premises. Pathos is critical in influencing my duty as a writer and other potential academic courses. If I utilize the pathos well, my audience will develop the same emotions as I do. They will feel the pain, joy, and hope as presented in the characters in my story. The audience will be motivated to act as opposed to passive listeners. The audience will fail to find faults in the argument and as such cannot disrupt the status quo. High ethos will allow me to attract the attention of the listeners. They will expect to hear some valuable information and can easily persuade them by delivering a compelling speech.

Therefore, the rhetorical strategies are effective in influencing the personal duty of a writer or public speaker (Higgins and Robyn, 2012). They motivate an individual to stick to the facts to attract the attention of the audience and make them believe the conclusion. It is empirical to apply ethos, pathos, and logos in public speaking and writing to appeal to the audience and deliver convincing information.

I have read some excellent stuff here. Certainly price bookmarking for revisiting. I surprise how much attempt you put to create this kind of magnificent informative site.