The article discusses about the purpose of international monetary fund (IMF) and its structure. 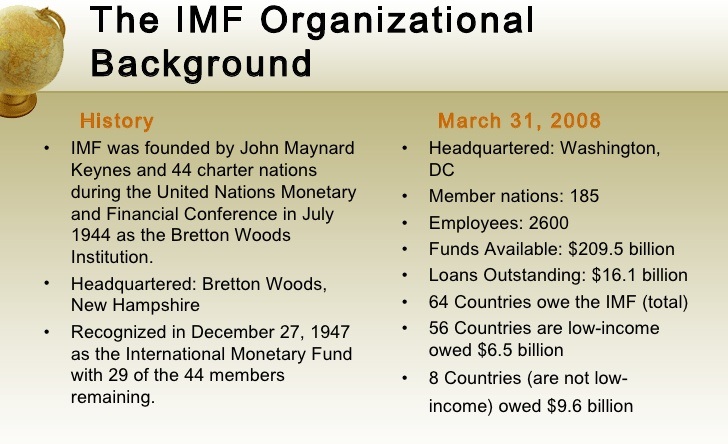 there is the maximum number of employee, from all over the world, as the employment is promoted. However, the IMF focused on the sustainable economic growth and do efforts to reduce the poverty across the world. IMF is under the 189 countries and it was created in 1945, however, it is accountable to all 189 countries, IMF does efforts for the sustainable economic growth, the cooperation’s do efforts for the competitive strength. There is primary purpose so that the stability could be there in the monetary system, there is the involvement of the international payments and exchange rate. There is the balance of payments so that companies or countries can transact with others and can provide benefit, however, the focus is also on the macroeconomics and financial field, so that the financial sector issues across the world can be resolved (Imf.org, 2016).

The IMF has the mandate and governance, who is involved in the global economy, the central role is performed by the governance so that the organizational functions can be retained. However, the structure is associated with the financial international architecture. The board of governors represents their countries, there are the meetings between the boards of governors, they have the highest decision-making power, there is one governor and one alternate governor, from the one country, the governor of the country is appointed by the central bank or the ministry of the finance. Board of governor has the delegated power, the board of governor can decide about the new members, which should be taken in the IMF cooperation, they have the right to decide the withdrawal of the members, the governor have the special drawing rights, in annual meeting there are the talks about all the processes that are needed to be done. However, there are also the ministerial committees in the IMF cooperation; there are the two ministerial committees, who give the advice to the board of governors, the development committee, and the international finance committee. There is the 24 members in the international finance committees; however, there are the 24 members of the executive board, who take care of the daily business process under the IMF (Imf.org, 2016).

Countries that have the greatest control over this institution’s policies:

There is the equality, no country have the greater power status, all the countries of IMF have the equal rights; all the countries can ask for what they need, however, the fund power can also influence the other countries. Because the country who has the economic strength is able to give the more money or funds as compared to the other countries, however, the countries who are giving maximum funds, depends on their economic conditions, have the more or maximum power. Example, U.S is giving about 20% of the funds each year, to the IMF cooperation, so U.S has the influence on the policies, all the Europe, is contributing example 30% of the funds then Europe also has the influence. Asia and Latin America is contributing less in the fund’s example 7% so they may have the less influence on the policies. The ratio of the power of the countries also depends on the trade-off, the country which does the maximum trade-off across the world, can ask about more rights. The countries have the equal status and efforts are done collaboratively so that the countries can be benefited in eth best way (Gandhi & Ruiz-Rufino, 2015).