Pros and Cons of Preschool

Education’s central role in one’s life has been generally accepted. When and where to start education, however, is not very argumentative. This argument often points to the necessity of preschools; the sufficient plat form for children to nourish and expand their mental and physical abilities from the very tender age. The importance of pre-school education can be seen among educationalists and the intelligentsia as a widely discussed topic. There have been several studies that support and refute the role of pre-school education; a factor that shapes the future life of a student. The supporters of preschool education are of the view that preschool education has an integral role in children’s learning and development. We will figure out some other features that will really help the kids extend their learning experience. But many others strongly disagree with the possibilities for pre-schools and point out that they are nothing more than glorified babysitters who can not give the child individual attention. This paper examines the advantages and disadvantages of pre-schools and discusses that pre-schools play an important role in shaping students ‘ character and behaviour.

Preschools have certain good qualities that help children become trustworthy, excited and eager to learn. Preschools provide students the opportunity to do as many things by themselves. This independent learning will increase their confidence to put on their dress themselves or keeping or arranging their toys as they wish. Preschools let the children to have their own preferences than prescribing things for them. Encouraging children to engage in games with their friends, relatives and others will also have the same effect. 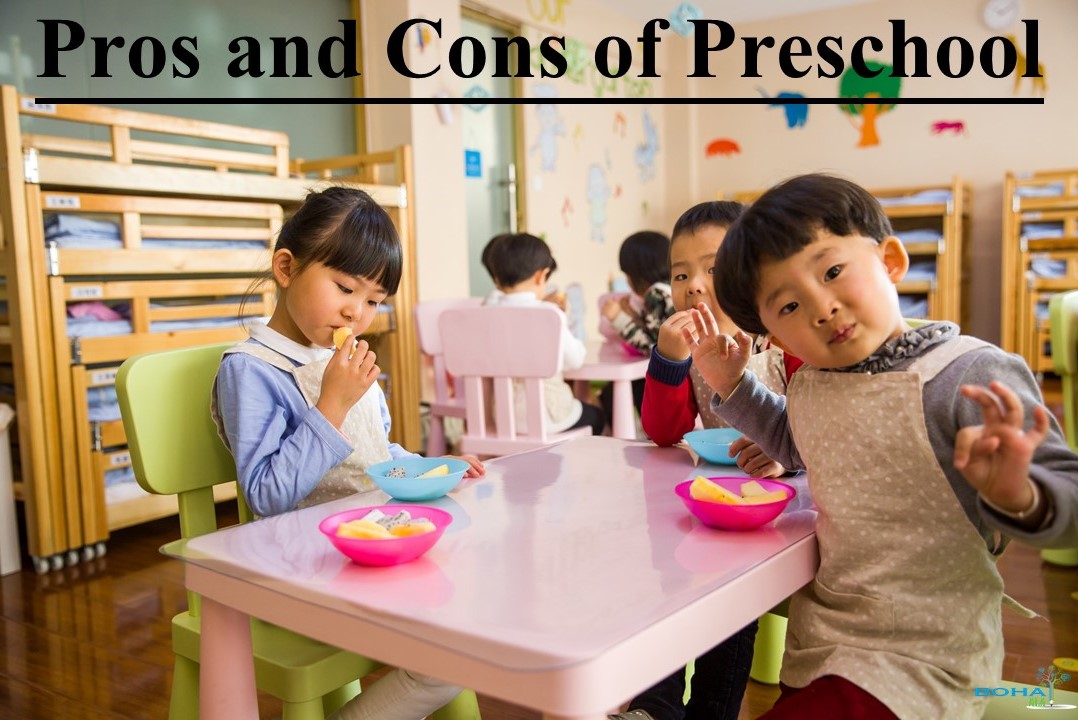 Preschools help the children to get acquainted with friends and family and they are taken to the new realm of education as well as knowledge. The combined endeavor of the parents and the teachers can ensure the all-round development of the children. Laurie Edwards in the article, ‘Building Self-Esteem in Preschool’ makes an assessment about the role of preschools in creating self esteem among the children. The author also agrees with the fact that “self-esteem begins in infancy, and by the time they reach the preschool years children already have the foundation for their self-esteem. However, parents and pre-school teachers can do a lot to build on that basis so that your child retains a sense of self-esteem throughout its development and growth.” (Para 1). It is this fact that leads many to regard preschool education as the foundation of children’s education. One has to keep in mind the verity that children’s perception about the outside world is formed during these years and as such they need ample protection to achieve success in the future life. There are many who believe that a child’s self esteem can be increased through preschool education.

Preschool education can exert tremendous influence on children during their transitional period. It provides them the much needed edge that may facilitate them to attain success in their future. It may enable them to keep ahead all through the educational life and get an edge over others. Enrolling children to preschool programs has also been proved as lending a hand in increasing their knowledge and skills. Morse et al. rightly identify the increasing popularity of the preschools when pointing that the demand for preschools among the parents is increasing nowadays. Morse et al. makes it clear in the report; Preschool for Everyone when they wrote, “Parental demand for early learning has grown steadily in recent years–as has the cost” (Para 3). Furthermore, the report presents how different social classes engage in preschool programs. “Well-off families can usually afford the pricey tuition of private preschool, and the poor are eligible for aid in the form of Head Start, the federally funded preschool program. But middle-class families like the Morreales have traditionally been left out” (Morse et al, Para 3). It makes one to the inference that preschool education can influence a child in many ways.
The structure of the preschool curriculum is quite notable as it is intended to provide the students a secure and stimulating platform or foothold for the bright future. It supports the students in their emotional, physical and social development and is designed to promote the well being of the children. Especially, the preschool curriculums designed for students with special needs are really effective in their mental growth. Cooper, Masi and Vick rightly observe the importance of childcare that children during the first five years of their life need special care as it is the time of their social development. They make it clear when they wrote, “Negative early experiences can impair children’s mental health and effect their cognitive, behavioral, social-emotional development” (Cooper, Masi and Vick 3). This observation also stresses the need of preschools for children. The well balanced preschool curriculum integrates play and work as pleasing the children that it will make children study work through various games designed entirely for them.

Research has identified certain drawbacks of preschool education. Jessica Reaves, the reporter of the Time magazine presents a very different study report regarding preschools. Reaves reports, “According to an extensive new study of more than 1,364 preschoolers, kids who spend the bulk of their early years in the company of anyone but their mothers are more likely to exhibit aggressive behavior once they get to kindergarten (Para 2).” The reporter adds that the separation is really affecting the mothers than the children. But reading through Reaves’ report it is also understand that “the more time kids spent away from their mothers, the more likely they were to develop behavioral problems” (Reaves, Para1). This report unveils the drawback of the preschool system.

There are many and varied benefits of pre-school education. Research have shown that pre-school education has benefited even the children with spina bifida as it increases the social development of the pupils, cognitive benefits, motor skills, overall personality growth and thus better prepares the students for school admission.  (Anderson & Spain 166-68). In the United States, the Federal Government undertook special policies and measures to promote well-designed early education programs for disadvantaged children in order to empower them. In California, there have been growing public investments in universal pre-school education. Researchers such as Karoly and Bigelow have found that the nation has immensely benefited from the huge amount of public investments spent on pre-school education. However one can also notice that there are great disparities in the nature of enrolment; Karoly and Bigelow, in this respect, rightly observe that “current enrolment rates are subject to large various across groups of children, depending on race/ethnicity, family income, parental education, and other factors” (Karoly & Bigelow xv). Thus, one can clearly see that the Hispanic children and children from low income families often fail to benefit out of the positive effects of pre-school education as they are negated of easy access to pre-school education. It is therefore imperative that there are provisions for free and universal pre-school education to the disadvantaged and minority communities in the nation whereby the marginalized sections of the society can be brought to the main stream. Similarly, there should also be efforts to bring down the number of pre-school ‘drop-outs’ who do not complete their universal pre-school education curriculum. This also calls for the need to make the pre-school curriculum more interesting and attractive to the children while maintaining its basic structure and goals.

The study leads one to the conclusion that preschools have integral roles in promoting and assuring the social, educational and psychological development of children. It is crystal clear that preschools can enhance the self esteem and educational standards of the students by guiding them through simple and interesting means. It helps the student to be confident and have independent thinking which may embolden him to take up new challenges all through his life. The preschool curriculum also makes them facing the challenges of life and learns the importance of work. Preschool education keeps the student ahead all through his educational life. It has also been proved that preschools can help the children to increase their skills and knowledge. To conclude, one can infer that preschools are essential for creating a new generation having good education and better thinking.