Two important points revolve around the critical energy issues at the start of the 21st century: the gradual depletion of fossil resources and the degradation of the greenhouse effect. The combustion of fossil fuels (coal, oil and to a lesser degree natural gas) releases into the atmosphere significant quantities of carbon dioxide (CO2), one of the main gases responsible for the greenhouse effect. Today, both scientists agree that this increased concentration of greenhouse gasses is responsible for climate change, which may be inevitable but is definitely exacerbated by human activity. These discharges are caused mainly by transport vehicles. However, the use of fossil fuels in the generation of electricity is also contributing to the worsening situation. Fossil fuels currently account for 80% of the electricity generated. And electricity generation is responsible for 40 per cent of those discharges into the atmosphere that are involved in changes in the greenhouse effect. Therefore, nuclear energy has a significant environmental advantage: it enables very large quantities of energy to be generated without atmospheric discharges or greenhouse gas emissions. (Advantages of nuclear energy for the environment)

The oil and natural gas deposits, the traditional and most important energy sources are exhausting day by day and the search for alternate energy sources has already been started. The current oil resources may be lasted for maximum for 40 more years as per the statistics available at present. It is difficult to imagine a world without any automobiles. Automobiles are helping the movements of goods and human across the countries which are essential for the economic growth of a country. Because of the above fact, it is necessary for the human to find out other alternatives for our future energy requirements. Nuclear energy is one option suggested by scientists because of the immense advantages of it compared to the disadvantages. Solar energy is another option, but the technology required to convert solar energy into useful forms of energy is still expensive which forced the scientific world to focus on nuclear energy. 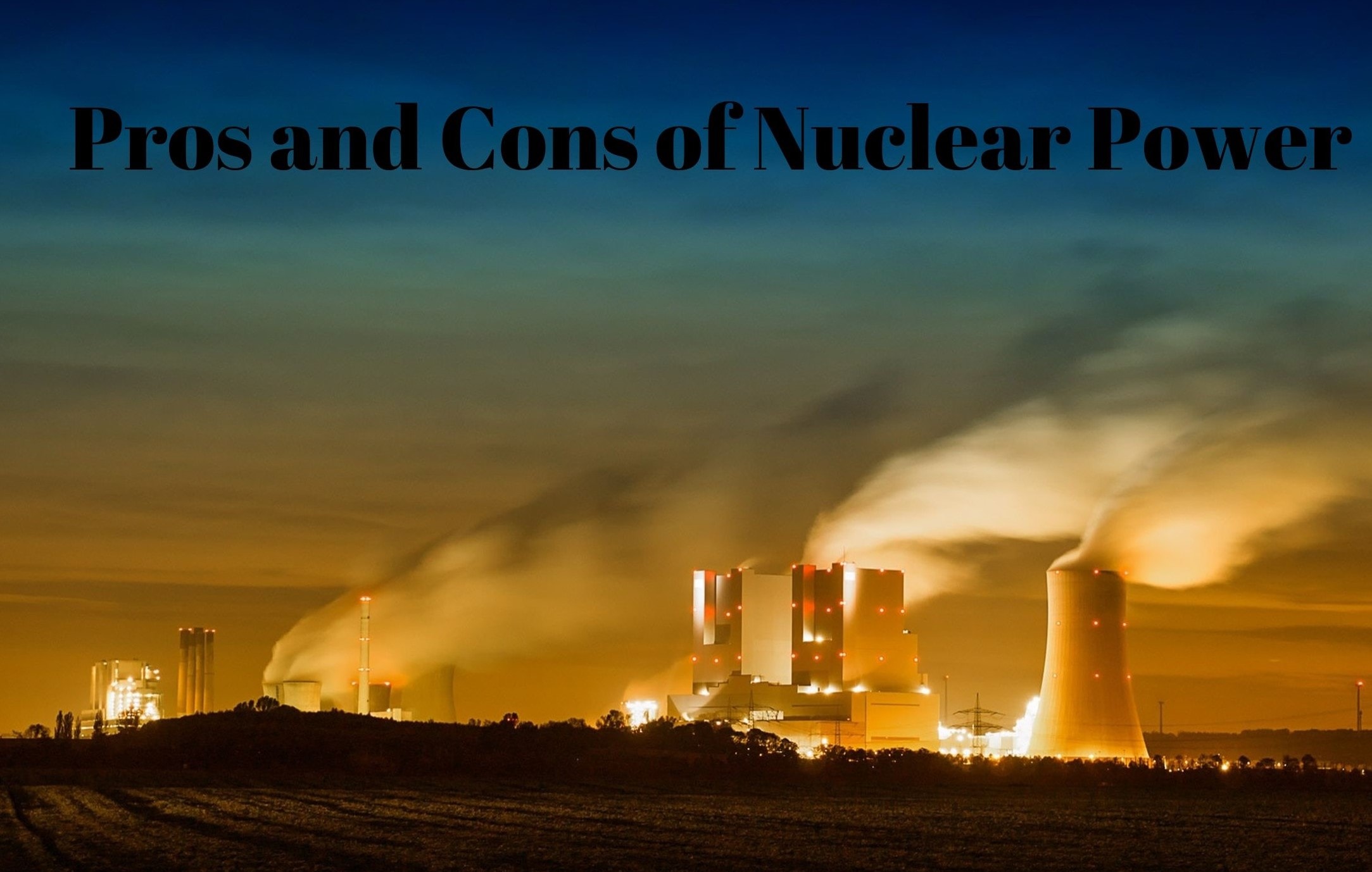 “In 1896, French physicist Henri Becquerel first discovered nuclear energy, also known as atomic energy. Nuclear power is used as a source of energy. Nuclear reactors are the devices that initiate and control reactions to the nuclear chain. These are used as sources for nuclear power generation”(Buzzle.com). Nuclear energy sources are of two types; manmade and natural. Energy liberated from sun and other stars are with the help of nuclear fusion reactions where as we can create nuclear energy using nuclear fission reaction. This paper analyses the advantages and disadvantages of nuclear energy as a future energy source for our country.

What is Nuclear Fission

Nuclear fission s the process through which the nuclear energy can be obtained in the form of heat for generating electricity. “It splits into several smaller fragments when a nucleus fissures. Such fragments, or products of fission, are about half of the original weight. There are also two to three neutrons released.

The sum of these fragments ‘ masses is smaller than the original mass. This ‘missing’ mass (about 0.1 percent of the original mass) has been converted into energy according to Einstein’s equation” (Nuclear Fission: Basics) the mass which is converted to energy will come out in huge volumes if the reaction is not controlled properly. So the most difficult thing in a nuclear reaction is the control of the chain reaction occurs inside the nuclear reactor.

Nuclear energy is considered to be the future energy source because of the following reasons.

Uranium and Plutonium are the main nuclear fuels and huge deposits of these elements are available on earth for our future energy requirements. Moreover, these fuels are inexpensive and the wastes formed after the nuclear fission process (Nuclear fission is the breaking of a heavy nucleus into its components with the liberation of huge amount of energy in the form of heat which can be used to convert water into steam which is essential for rotating the turbines in electric power generating stations) is easy to handle also.

Global warming is a hot debated topic at present because of the threat it is causing to the living things. Atmospheric temperature is increasing gradually because of the toxic gases liberated by the automobiles which use petrol or diesel as fuel. Even at the time of processing of petroleum, these gases are liberated. In short, petroleum and its related products are raising stiff challenges to our environment.

Unlike the processing of petroleum, no greenhouse gases (Carbon dioxide, methane and nitrous oxide like toxic gases) are liberated at the time of processing of nuclear fuels. Petroleum processing and the usage of it in vehicles will result in liberation of toxic gases to the atmosphere which not only increases the atmospheric temperature, but damages the protective ozone layer at the top of the atmosphere also. Hydro electric projects on the other hand cause challenges to the balance of eco system. Nuclear energy seems to be the best solution for our country’s energy crisis when we analyse the long term goals and the disadvantages of other options.

The energy obtained from nuclear sources are huge in quantity compared to other energy sources like the petroleum, hydro electric projects, thermal electric projects, solar energy etc. The present popular energy sources of oil are exhausting rapidly and in near future itself most of the oil wells will stop their production. Even though oil is available deep into the sea, the processing of such oil resources may not be economical and hence we have to search for another energy option. Nuclear energy seems to be a better option for electric power generation from other sources like hydro electric projects and thermal projects are not much suited to our geographic conditions. Moreover, environment protection is a major concern for all the countries including and our country cannot stay away from the commitments to the environment.

“Nuclear energy technology is readily available; it does not have to be developed first. A high amount of electrical energy can be produced in a single plant” (Pros and cons of nuclear power) The technical knowhow of nuclear technology is already known to the scientific world and limited capital is required for the research and development. Moreover, no other energy source can produce such a huge amount of electric power as the nuclear power plant can generate.

Apart from the advantages mentioned above the nuclear energy has following disadvantages also.

Nuclear energy projects require large capital compared to other energy projects. Safety should be given huge priority while working on nuclear projects because of the uncontrollable nature of the nuclear reaction once it is started. The wastes coming out after the nuclear process will be radioactive in nature which will be harmful to the nature and the living things. The nuclear waste disposal is a major issue as far as nuclear power projects are concerned. We cannot dispose it either on land or in sea since the nuclear radiations coming out from these waster materials can travel long distances through any medium. These radioactive nuclear wastes will last for thousands of years liberating harmful nuclear radiations. Some countries are thinking of disposing the nuclear wastes into outer universe.

Nuclear proliferation issues are widely discussed in the current world because of the possible misuse of the technology. Most of the countries which have nuclear energy technology are threatening others of using it for making destructive nuclear weapons. For example, Iran and North Korea have recently conducted lot of experiments on nuclear energy which others suspect that may be used for making nuclear bombs. If used for energy purposes alone, nuclear energy is the most reliable energy source at present we have. But the possibility of misuse forced UN to impose regulations on the usage of nuclear energy which resulted in nuclear proliferation treaties.

“In 1986, a worse disaster struck Russia’s Chernobyl nuclear power plant. A significant amount of radiation escaped from the reactor in this accident. The radiation was exposed to hundreds of thousands of people. In a couple of days, several hundred died. In the years ahead, thousands more can die from radiation-induced cancers” (Think Quest) The radiations liberated from nuclear wastes may not exhaust in the near future. It can survive for thousands of years and hence the threats also will last for such longer periods.

“Production of a plant with 100 percent protection is technically impossible. There will always be a slight chance of failure. The effects of an accident for both human beings and nature would be absolutely devastating. The more nuclear power plants (and nuclear waste storage shelters) are built, the higher is the probability of a disastrous failure somewhere in the world” (Pros and Cons of Nuclear Power).  “Most people think nuclear power is here to stay, and we need to learn how to live with it. Others argue that all nuclear weapons and power plants should be demolished. Both sides have their cases as there are advantages and disadvantages to nuclear energy. Still others have opinions that fall somewhere in between” (Think Quest) Comparing the advantages and disadvantages of nuclear energy with other sources of energy, we can safely say that the nuclear energy must be utilized as the future energy source. The support for nuclear energy increases since no other feasible energy sources have been identified so far.