Pros and Cons of Media

Media in plain words, is any medium of communication used to reach out to the masses (Mark 491). Before addressing the various problems in today’s world’s numerous press outlets, it is important to explain the word ‘ News, ‘ a term that has lost meaning of definition with the endless confusion around us. 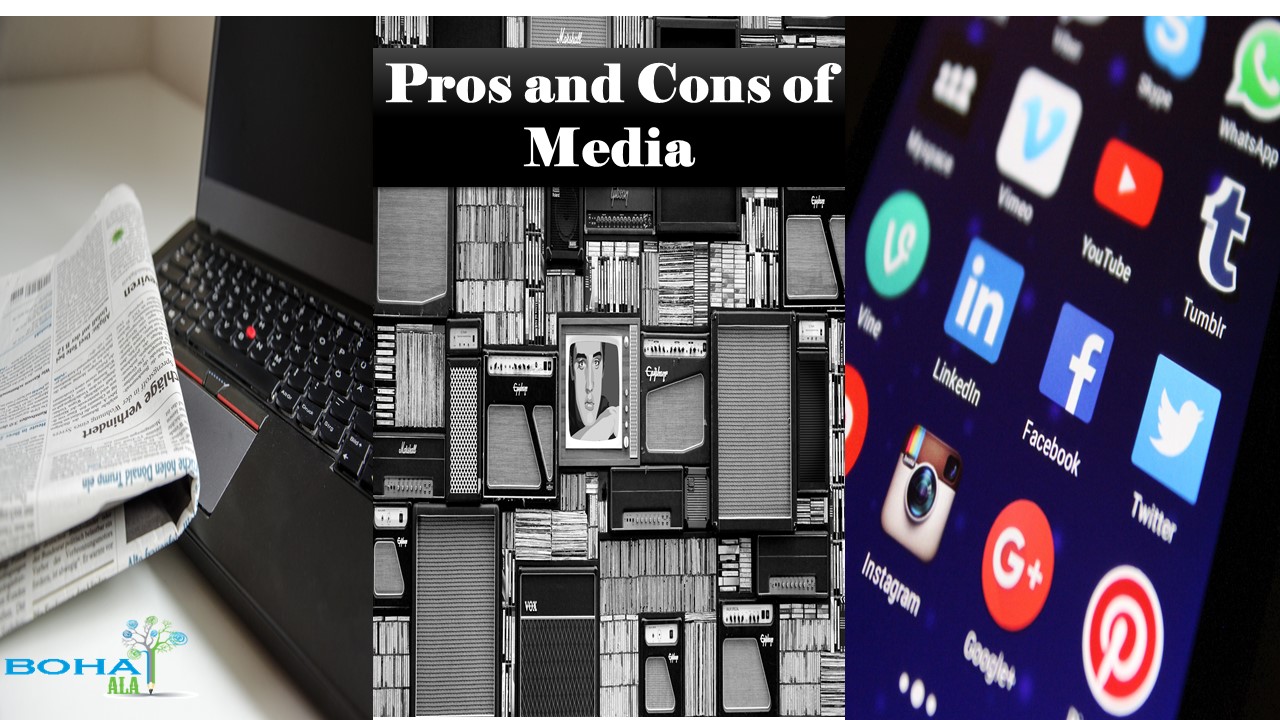 The news also has its pros and cons, like any innovation. These give birth to our discussion topic, i.e. current media problems and their solutions. Since traditional media enables managed knowledge transmission, it acts as a medium of reinforcement of tradition and culture. The reason why traditional media holds such importance is because it targets to the masses. The positive aspect of this media is by far greater than that of new media, but, being a mass media it can play a significant role in shaping the minds of the people. Societal aggravations are greatly heated up with the wrong portrayal through the mass media. Thus, it can be said that this is the biggest flaw in the traditional media is the uncontrolled flow of information. This information needs to be monitored carefully as this kind of media ensures wide-spread coverage of the content.

On a societal scale, the inappropriateness of the content is one issue that has been highlighted for decades now (Garry 215). The essence of shows, like cartoons, is considered unhealthy because of explicit subliminal messages and violent actions shown in them.  However, this comes with a simple solution like selected viewership options, child-locks etc. Newspapers are by far the safest media as far as keeping the societal harmony and values intact is concerned. The content is highly filtered and relatively less aggravating as the other mediums. That said, in recent years, marketing has seen a positive trend. With the proliferation of hundreds and thousands of brands seeking to get their share of the market, the advertising clutter on the conventional mass media is growing.  Whether these brands engage in ethical marketing is another issue entirely, but it should be the duty of the press to ensure that at least misleading product advertisements and infomercials are not granted airtime, as it reveals false information contrary to the morals of a media aimed at attracting the public.

With the advent of technology, internet conception, mobile devices, and so on, has brought about a shift in the influence of conventional mass media. The value and the component of’ mass reporting’ is still intact, while people are moving rapidly to other media such as e-papers, e-news, forums, social networking sites, blogs, etc. Where these media represent technological advancement, modernity and mobility, they also face a number of challenges.  The basic change in media has been because of the introduction of two mediums, namely, the internet and the cellphones. The Internet has brought about a positive change in the world through its endless advantages, some of which include complete accessibility, availability of information on almost every subject in the world, job search and recruiting, digital business marketing channel, readily available product analysis, online educational opportunities and video conference programs such as Skype etc. But, like mentioned earlier, everything comes with its pros and cons, so does this highly beneficial media.

People can stay in touch with their friends and families worldwide, keeping them just a free video call away, thanks to softwares like Skype. LinkedIn and other professional sites allow professionals to maintain an online profile that helps head hunters search for them, giving them an opportunity to work at a better position. Many job seekers make use of the internet to seek the jobs they desire or are eligible for. Universities and colleges allow their students to access restricted information portals from home for lectures and other course related work. Businesses all over the world can easily trap the location of their target market and customize their marketing accordingly (Jenkins 18). It has become easier for customers to reach out to the companies to give their feedback, send in queries etc. The benefits of the internet are endless, like every technology aimed at making man’s life simpler and easier. On one hand the internet simplifies life and on the hand it tends to have negative implication of our lives. Some of the endless misuses and misgivings of the blessings of the internet are lack of privacy protection, hacking, internet addiction, inappropriate content, misuse of personal data, identity thefts etc. There are several counter actions to tackle the above mentioned problems. Following are some of these problems with their counter measures. Hacking can be tackled by employing several data encryption techniques that have strengthened over time. Adequate information should be provided to keep people abreast of all the risks involved with electronic data transfers.

Several softwares have been designed to restrict sites that are inappropriate, explicit or endangering in terms of content covered. Pornography should be age-restricted to prevent young children to be subjected to it, even accidently (Krotoszynski 447). Cyber-crimes in terms of identity thefts, hacking and theft of intellectual property can be countered by not only monitoring the internet activities but also levying strict charges against such activities. Online Dating has been a welcome feature of the internet where people from far off can interact with people who have the same interests as them. However, unmediated dating activities should be hampered or be age-restricted.

Cyber bullying is a negative phenomenon given birth to by instant messaging services and social networking sites. Cyber bullying can be in form of stalking, harassing or humiliating someone. There are several ways to prevent the outcomes, often drastic ones, by educating people specially youth about the chances of such activities. They should be able to identify and report the bully/stalker as well as take counter measures like blocking that person, reporting his actions to the site administration etc. Social Networking has seen a great boom in the last few years. Allowing people to stay in touch and providing instant insight into each other’s life has had people hooked onto social networking sites like Facebook and Twitter, leading us to another negative phenomenon of the internet; internet addiction. Internet addiction can not only lead to people wasting unnecessary time online, surfing useless websites or stalking other people at home but it also leads to violating of workplace ethics by having people stay constantly in touch with their social networks through mobile device (Chou 364). Even if organizations place a ban on their employees to surf such sites, technology has given them other alternatives to do so otherwise. The only way internet addiction can be controlled is through addressing the issue at a societal level.

Apart from allowing people to indulge in wasting their time, social networks have also played a great role in aggravating the masses. With quick access and spread of news, people can be subjected to exaggerated news pieces causing them to lose their cool and retaliating. Even though it brings many issues to light, creating awareness, a monitoring body should be assigned the work of reviewing the content to prevent people from losing their cool or acting in haste out of emotions. New and faster gadgets have made children give up playing physical games and be hooked onto online gaming all the time. This has several societal implications because not only does it hamper the psychological and physical growth of the children, it also makes it hard for parents to track the kind of gaming implications of each application on the children’s personal gadgets, leading to the children being subjected to audio visuals that they are too young for. This problem can only be tackled through an effective mass campaign aimed at addressing this problem at large. Children should be encourages at a mass level to indulge in physical sports rather than playing virtual ones. Intellectual property is stolen at large through the internet. Appropriate measures to ensure its prevention should be taken at the government level. This is because it is every creative mind’s right to have its work acknowledged and owns it for lifetime. Hampering such acts will only encourage them to indulge in more authentic thinking. Cellular technology is the second new form of media.  Providing easy connectivity to everyone at large, it is both a blessing and a curse. Where it helps people stay in touch and stay online all the time, it is also the source used for initiating terrorist attacks, tapping of calls, harassment, bullying, wasting time at work, disturbing the privacy of the people, short messaging service marketing etc.

Again, apart from the government taking actions and spreading awareness regarding these negativities, the only way to tackle these problems is to act on an individual and societal level. Parents need to ensure that they know what their children are being subjected to, through different media. The masses need to understand that sometimes the information given are just stated opinions and they need to ensure the authenticity before reacting to any news. At an individual we should all focus on maintaining ethical practices, not indulging in useless and harmful activities online and take preventive measures to protect those around us from the misgivings of theses mediums. In Conclusion, it is evident that the media, like every other technology has a good and a bad side. What matters is which side we chose to act upon and benefit from.