Since the introduction of the Honda Insight in the 1990s, the first petrol-electric hybrid car to sell worldwide, followed quickly by the ever popular Toyota Prius, the future is looking ever brighter for hybrid vehicles. But how accurate of a picture do we have of the long-term future of hybrids? This paper first explains the basic components of the hybrid and the basic underlying concepts of how hybrid vehicles work. Then the basic physics behind the hydrogen fuel cell is explained. Finally, this paper examines the pros and cons of hybrid cars, exploring a few solutions hybrid cars provide and a few problems that the hybrid vehicle industry still faces. 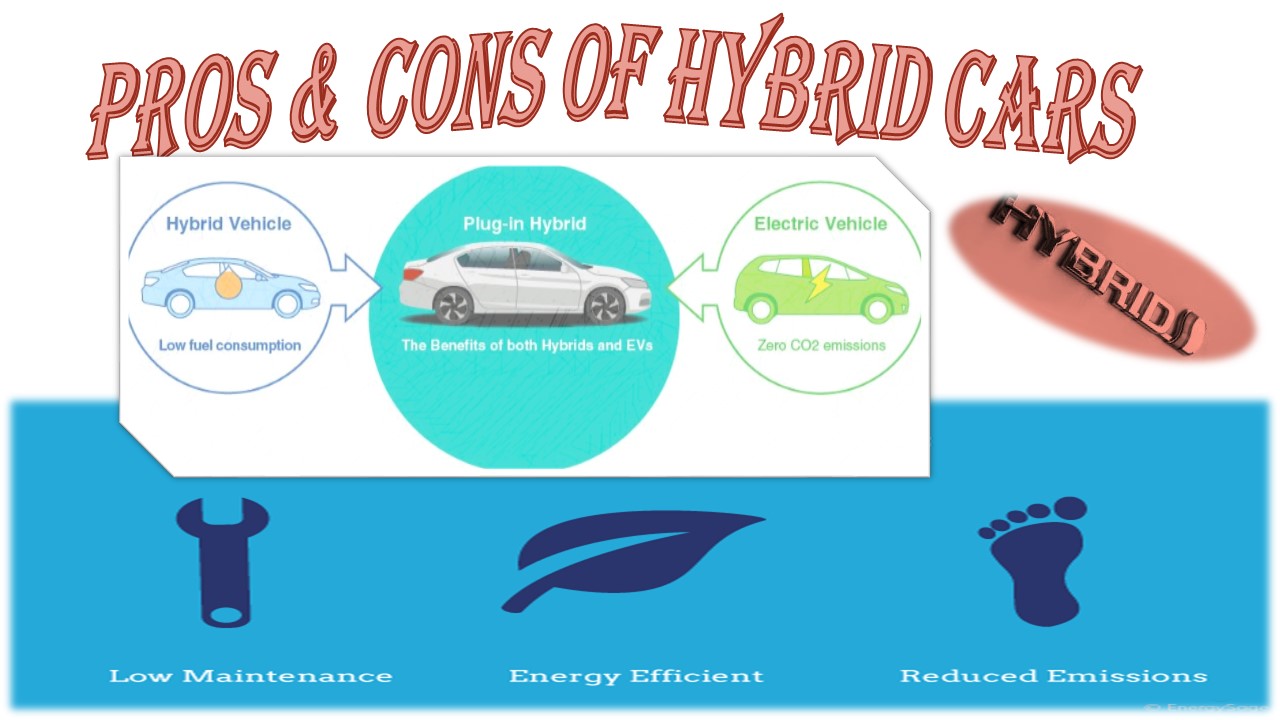 There are many advantages to petrol cars, and one of these is its great power. A petrol car has a fuel tank that typically fuels a four cylinder engine, which turns the transmission, which turns the wheels. The engine can produce over 100 horsepower (hp), and exceed 8,000 revolutions per minute (rpm). The drawback of petrol cars is the increasing cost of petrol and the pollution contributing to greenhouse gases and unhealthy air in our cities.

An electric car circumvents these problems of petrol cars. An electric car has a set of batteries that fuels an electric motor that can reach 15,000 rpm and 100 kW power for a powerful acceleration. Because of the high rpm of the motor, electric cars can have transmissions with only one gear ratio. The drawback is that electric cars usually go between 50 to 100 miles between charges. It can also be slow and inconvenient to recharge. 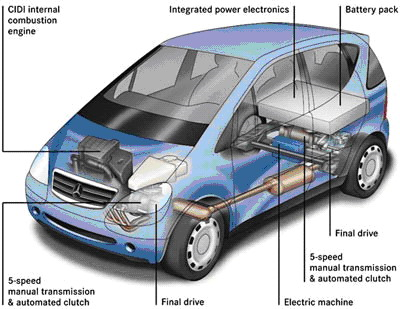 Petrol-electric hybrid cars are an attempt to utilize the advantages of both of these car types, while mostly avoiding the disadvantages. Gas-electric hybrids use a gas tank, gas engine, electric motor, generator, batteries, and transmission (see fig.1).  The electric motor can draw energy from the batteries, and also act as a generator to generate energy to store in the batteries. The Toyota Prius has a radically different transmission; other hybrids have conventional transmissions.

Although most hybrid cars are petrol-electric hybrids, there is the possibility of producing hybrids from other technologies. For instance, petrol-hydrogen hybrids such as the Mazda Premacy Hydrogen RE Hybrid, which features a transverse hydrogen rotary engine (Haldis 2007). This hydrogen hybrid is the world’s first hydrogen-petrol dual-fuel system, and was being road tested in Japan in June 2008. The transverse mounting of the hydrogen engine, instead of the conventional longitudinal mounting, resulted in higher power output over a wide range of engine speeds. Hydrogen combustion energy is converted into electric energy to drive the motor. The hydrogen rotary engine developed by Mazda can run on both hydrogen and petrol fuel, and uses electronically controlled hydrogen gas injectors (see fig.2). This type of hybrid vehicle seems promising, and is built on the physics of the hydrogen fuel cell.

Hydrogen fuel cells were first designed as a reverse electrolysis process. In electrolysis, hydrogen and oxygen are split when an electric current is run through water. This process produces a separate supply of hydrogen gas and oxygen gas. In hydrogen fuel cells, the reverse process occurs: the hydrogen and oxygen gases are combined to produce electricity and water as a byproduct (see fig.3). This happens by using a catalyst, typically a metal or alloy. The hydrogen fuel is separated into its electrons and protons; the electrons are made to traverse a circuit, and the protons are recombined with the electrons and an oxidant to create waste water. 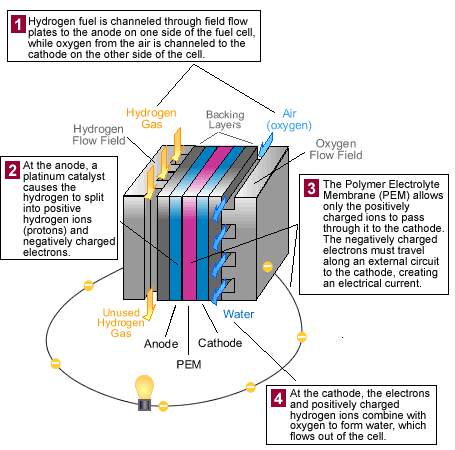 There are many different kinds of fuel cells, usually classified by the electrolyte they use. The most promising for transportation include the polymer exchange membrane (PEM) fuel cell and the solid oxide fuel cell (SOFC). PEM fuel cells have high power density and low operating temperature, so it warms up and starts generating electricity relatively faster. The SOFC operates at very high temperatures; reliability becomes an issue unless in continuous use.

There are many hybrid models currently on the market. Besides for the Honda Insight and Toyota Prius, there is the 2007 Honda Civic Hybrid; and the 2004 Ford Escape SUV hybrid, the first SUV hybrid. It may be very soon when we will see hydrogen-petrol hybrids on the streets of Western cities.

What are the Pros and Cons of Hybrid Cars?

Possible cons include the question: doesn’t having two motors on board make the possibility of breaking down even greater? After all, the system is more complicated than just a straight petrol or electric-powered car. Having two motors onboard also requires having more auxiliary systems to support them. Since hybrid car owners can expect to spend more time in the shop, this disadvantage of hybrid cars is typically offset by stronger warranties.

And another “con” of using hybrid vehicles is the possibility that it will forestall the entrance of even greener vehicles onto the market. If there is a strong demand for hybrid vehicles, then car manufacturers will respond to this by putting more hybrid cars on the market. Meanwhile, the possibility of hydrogen fuel cell vehicles, for instance, which would have zero emissions, may not make it to market at all. Hydrogen hybrids hold the most hope for developing the technology to meet future needs; while the hydrogen hybrid technology is being developed, there is the hope that much of this technology can easily be modified into entirely hydrogen-powered vehicles once the oil has run out.

One of the “pros” of hybrids: braking energy is stored in a battery. This system may even prolong the life of the brake pads. When the hybrid car’s battery gets low, the gas motor will automatically start in order to charge the battery. This avoids the problem of electric car owners, who can be stranded just out of extension cord range of an outlet and have to be towed.

Electric motors turn off during idle and use less energy than petrol-powered motors at low speeds. Hybrid cars are designed so that the electric motor is used during rush hour stop and go driving, but at speeds above 40 mph the gas motors kick in, since gas motors deliver more power.

One of the biggest “pros” of using hybrid cars is the benefit to the environment. ‘A hybrid cuts emissions by 25% to 35% over even the most fuel efficient gas powered models’ (Dunn 2006). If everyone drove hybrid cars, we could cut worldwide car emissions by atleast 25%, and probably by a lot more, since there are so many still driving SUVs and trucks. Cutting 25% of vehicle emissions would cut what percentage of the total emissions? Cars from Western countries produce over 300 million tons of pollution; Western countries use over 25% of the oil produced worldwide, but not all of this oil is going into cars. There is about a billion tons of pollution created by cars annually worldwide. Whether cutting emissions by using hybrid cars would be enough to curtail global warming is debatable. More drastic measures may be needed, such as switching quickly to zero emissions technology in order to stop global warming.

Another environmental advantage of hybrid vehicles is the fact that there will be less oil spills that kill wildlife if the demand for petrol is decreased. If less petrol is used, this means that less oil will have to be transported to refineries where the petrol is produced. On the way to the refineries, millions of gallons of oil are spilled every year. In addition, the refineries produce pollution during the manufacture of petrol from oil; decreasing the use of petrol will also reduce this refinery pollution. A switch to hydrogen fuel cell vehicles would be the most ideal and could mean the end of this type of habitat destruction and pollution.

But the greatest advantage of using hybrid vehicles or hydrogen fuel cell vehicles will be the reduced demand on foreign oil. The oil supply is finite, and many believe we have now reached Hubbard’s Peak, and there is nowhere to go but down. Eliminating the demand for oil from unstable countries will decrease the likelihood of global war, wars that some would say have already occurred within the Middle East and may only increase as desperate Western countries with cultures based on oil consumption increasingly see little options to making the decision to defend that way of life at any cost.

Developing hybrid technologies or even fuel cell technologies for vehicles will also potentially contribute to other areas of technological development within society. The demand for cleaner, greener technology to replace the ICE technology will likely spur research into ways of making hybrid and fuel cell technology atleast as powerful as today’s conventional ICE vehicles. This in turn may create unforeseen technological spin-offs. This research may also drive down the cost of hybrid technology and fuel cells, which then may be viewed as increasingly cost-effective enough to be placed in other vehicles besides cars and in many other modern appliances drawing on power, everything from cell phones to household appliances. In particular, when an industry begins to develop hydrogen fuel cells, the hydrogen economy may be able to get off the ground; the market may suddenly become available to build the hydrogen infrastructure that the fuel cells need to take off. These technological developments may spur even further economical growth across the world.

We know that in the long term, hybrid cars cannot be the future of transportation. There is only a finite amount of oil beneath the Earth’s surface, oil that took millions of years to form from fossil material; oil is mainly the remains of dinosaurs. This means that oil will one day run out completely, and there will be no petrol to run hybrids. Does it make sense, therefore, to spend large amounts of research time and money to develop hybrid vehicles? This same amount of research time and money may have to be spent again to develop a long term solution such as hydrogen cars.

In conclusion, the future of hybrid and fuel cell technology being used to create better vehicles is promising but more research is needed. Hybrid and fuel cell technology will have to be advanced to the point where it can produce the same power of today’s vehicles. This will likely occur when the demand for hybrids and fuel cells increases. When this occurs, the advantages of the new technology are immense, and include greater cost-effectiveness; safer, cleaner, quieter, and more reliable technology; and environmental soundness due to the complete elimination of greenhouse gas emissions from vehicles. The greatest advantage of hybrid and fuel cell vehicles may be in the way the research performed to achieve this goal may help to create a hydrogen economy that can drive and sustain our power hungry world, just as many developing countries with billions of people such as China are beginning to emulate the conspicuous consumption lifestyles of the west. Not to mention the security that will come from our transportation industries relying on a renewable technology, instead of depending on limited, dwindling fossil fuel resources, the demand for which steadily increases the potential for global war.