Euthanasia blends two separate Greek words ‘ eu’ and’ thanatos.’ Both words mean “good / happy death” when combined and translated in English. Euthanasia is aided by suicide, bringing an individual to the point of death with the appropriate assistance of one or more individuals at the will of the person. There are many conditions in which living is extremely painful for the patient, so the patient prefers death over life in an attempt to escape the unbearable pain on a permanent basis. In other cases, euthanasia is offered to older patients who have gone through comma for years. People may want to die because of several reasons. They may be continuously feeling very low in depression, and may seek refuge in suicide, though there is also a significant percentage of people that resolve to finish their lives because of occasional distress and emotional outburst, that may occur as a result of divorce, loss of a loved one or forced sex. Euthanasia is one of the most controversial issues that has been the subject of much debate. Euthanasia is approached with two different views, one of which is traditional that generally considers euthanasia a bad practice, but considers it justified under special circumstances when the pain is inevitable and there is no way out by treatment. The modern view about euthanasia distinguishes between active and passive euthanasia and considers the former forbidden as per all standards of ethics, religion and morality while the latter is considered allowable. Hence, assisted suicide and mercy killing are allowed in the modern view of euthanasia. This paper discusses the ethical implications of this practice from both sides of the debate. 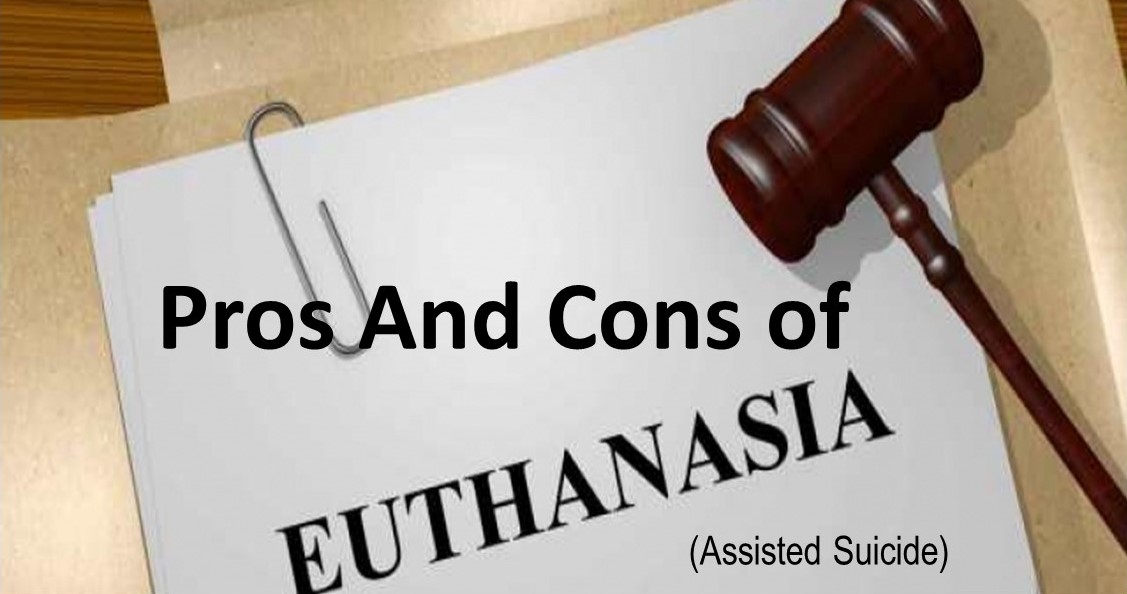 Moral principles and rules are principally justified by two fundamental ethical theories; deontological ethics and utilitarianism. The second theory is also referred to as consequentialism because it evaluates the justification of an action on the basis of its consequences. Utilitarianism is approached in several ways, but the most common utilitarian approach to ethics does not consider any action intrinsically good or bad. It is neutral towards all moral rules and acts. The criterion for determining a right or wrong action or law in utilitarianism is “only a matter of the general non-moral good (e.g., enjoyment, happiness, safety, intelligence, or fulfillment of individual desire) created in the consequences of doing that act or following that rule” (Moreland, 1992). Thus, utilitarianism considers morality nonmoral good materialized as a result of moral rules and actions. In the utilitarian view, moral responsibility is instrumental rather than intrinsic. Morality leads to a conclusion. It is not a conclusion in itself. The utilitarian view has conventionally received a lot of criticism of the theologians and philosophers fundamentally because it deems many immoral things moral just because their consequences are not troublesome. The utilitarian view considers all such practices ethical whose results are favorable. This is the main reason why most philosophers and theologians refer to the deontological ethics for evaluation of any matter. Deontological ethics evaluates a rule or action on the basis of natural moral law, Scripture, and common sense. There are three primary features of the deontological ethics, the first of which emphasizes that a duty needs to be done for nothing but its own sake. The justification of a rule or action partly depends upon its intrinsic moral traits. The deontological ethics considers such as acts stealing, lying, killing and promise breaking as intrinsically unjustified and thus, deems them unacceptable under all circumstances. Nevertheless, this does not, in any way, mean that the results of the rules or actions have no importance in their assessment. In fact, in deontological ethics, it is the results that fundamentally dictate which plan needs to be adopted so as to accomplish the goal without going wrong. Thus, deontological ethics considers euthanasia a murder and does not allow it in any case. It does, however, emphasize upon a need to realize more ethical options for dealing with the individual wanting assisted suicide. Since, deontological ethics is considered more reliable and justifiable as per ethical standards than utilitarianism, a vast majority of the philosophers and theologians consider euthanasia an unethical practice.

We get daily calls from desperate people at the Hemlock Society who are finding someone like Jack Kevorkian to end their lives that have lost all value … Americans should have the freedom to not be made to endure in the European Declaration of Human Rights. It should be deemed as much a felony to have someone live who is unwilling to continue with excuse as it is to live without consent. (Girsh, 2009).

As a result of great emphasis upon the legalization of euthanasia by a vast majority of people, this practice is legal in a lot of countries. The governments have formulated special laws and regulations that address this issue. These rules primarily include but are not limited to the “presence of advisory board that will review each case of mercy killing, the permission on the part of the patient to withdraw such request for assisted suicide and mercy killing must be done under prudent and controlled conditions” (Lopez, 2011).

Adversaries of euthanasia base their opinion fundamentally on religious grounds, stating that it is for no one but God to choose the time of birth and the time of death of a person. “The idea that it should be illegal to help someone commit suicide is most often ascribed to the Biblical Commandment: Thou Shall Not Kill. Despite this, several Judeo-Christian societies have condoned assisted suicide in recent years” (Pickert, 2009). If an individual is in a state of stress or pain, it is God’s will. God will take the life out of the body when He will want. By interfering in God’s business, humans are making themselves sinful and will have to be accountable for their acts in the world hereafter. Suicide is wrong, be it assisted or otherwise. By helping the patient embrace death, the caregivers are committing a murder. This is the concept that forms the basis of deontological ethics approach towards euthanasia. Euthanasia promotes violence. Besides, there is another very strong reason why euthanasia should be avoided at any cost. At different points in time, people are in different states of mind. There are times when an individual thinks very optimistically. His/her optimism enables the individual to optimize on his/her capabilities and he/she is able to work his/her way out of the trouble and yet, there are times when an individual thinks very pessimistically and tends to take violent actions in an attempt to escape trouble. A vast majority of people who request assisted suicide are not in the right state of mind, though this state of mind is most temporary and may not last forever. In fact, a lot of people that remain very happy generally do feel so low occasionally that they want to die, but this does not mean that their wish be fulfilled because they want it. While in the state of anger, people do a lot of things that they repent later. Such actions include but are not limited to divorce, physical or verbal abuse and murder, but there is no turning back once the soul is made to leave the body by euthanasia. Therefore, euthanasia should never be considered as one of the options because there is no remedy for the loss once it has been made. In addition to that, euthanasia signified loss of hope, which is forbidden by many religions. By losing hope that the patient would ever come out of the trouble, people tend to doubt that God is not with them. Tough times usually come as a challenge from God Almighty, and people who lose hope actually lose to the challenge and may be held accountable for their lack of trust in God. Same holds true for the people who want to commit suicide because of depression or any other reason.

In the contemporary age, suicide rate has reached its apogee. Hundreds of people attempt suicides in order to escape the worldly depression and anxiety. In addition to that, there are patients in extremely bad condition with little to no hope of life. Many patients of comma remain in the unconscious state throughout their lives and their medical expenses have to be continuously borne by their relatives. This has called for a need to escape the constant state of pain both for the patient and the relatives through assisted suicide, but it is too controversial a practice to be accepted by the society in general and the vast majority of the philosophers and theologians who are the followers of the deontological ethics in particular. Utilitarian view justifies euthanasia whereas deontological view condemns it. In today’s society, the latter view dominates the former. There are many people who spare the idea of committing suicide simply because it is illegal. Legalizing assisted suicide will trigger the number of suicides. In their attempt to gain freedom and individual rights, people have gone so far that they have started to meddle with the laws of nature, and thus tend to speak in favor of euthanasia. Thus, it is recommendable to avoid euthanasia at any cost. Instead, different ways should be tried to achieve the desired objectives without having to compromise upon the implications of ethics. As an alternative to euthanasia, “Palliative care and rehabilitation centers are better alternatives to help disabled or patients approaching death live a pain-free and better life” (Maisie, 2011). Today, as a result of the rapid advancement in the medicine and technology, we are privileged to have more opportunities of saving lives. Diseases that used to be painful once can now be either fully cured or can be reduced in severity of pain for the least. Lives of patients who can not recover mentally or physically can be sustained by making use of the contemporary medical technology. On the other hand, euthanasia is a one time job that can not be reversed. Life is precious and can not be restored in the body. Owing to innumerable demerits of euthanasia, all possible alternatives should be considered in order to improve the circumstances for the patient as well as for the relatives instead of resolving to commit the act of murder.