Pros and Cons of Cohabitation

The concept of living together has changed recently in the way people think and feel. They are now more open to have cohabitation within their ranks than to shun it all together. Couples believe that living together would solve their problems, get to know each other better and make love whenever they want. They would not have anyone on their head to do the chores and thus be responsible for their own acts, behaviors and just about everything that comes under the heading of cohabitation.

There is the premise that knowing the other partner is significant since it will form up as an essential ingredient in the line of marrying each other. One finds the strengths and the weaknesses of the other person when he lives with the partner and thus finds what is going on within their own lives and how best they could share their own selves with their chosen partners. It is a fact that nearly 70% of second and third marriages take place due to the element of cohabitation making its route within the unhappy souls – who have had enough at the hands of their earlier spouse and now they want to move ahead and put more sanity into the whole domain of marriage. They want to test, learn and cooperate with their partners before they make a decision of tying the nuptial knot. However must never forget that the disadvantages are there for the taking as well. Just as a case in point, my cousin and her boyfriend started to cohabit whereby he secluded her completely. He used to take the car keys along with him and lock her up back at home. (Booth, 2002) Also my cousin’s boyfriend did her best to cut off my cousin’s ties with her friends, thus having a complete social boycott with her friends. One should think that living together here was considered a positive thing, because my cousin discovered what was in store for her in the future and determined for her own good that she should leave such a person who would be there once and for all to ruin her future. Coexistence thus enables and encourages a compromise when the situation is grim and there is no hope of recovery at all. 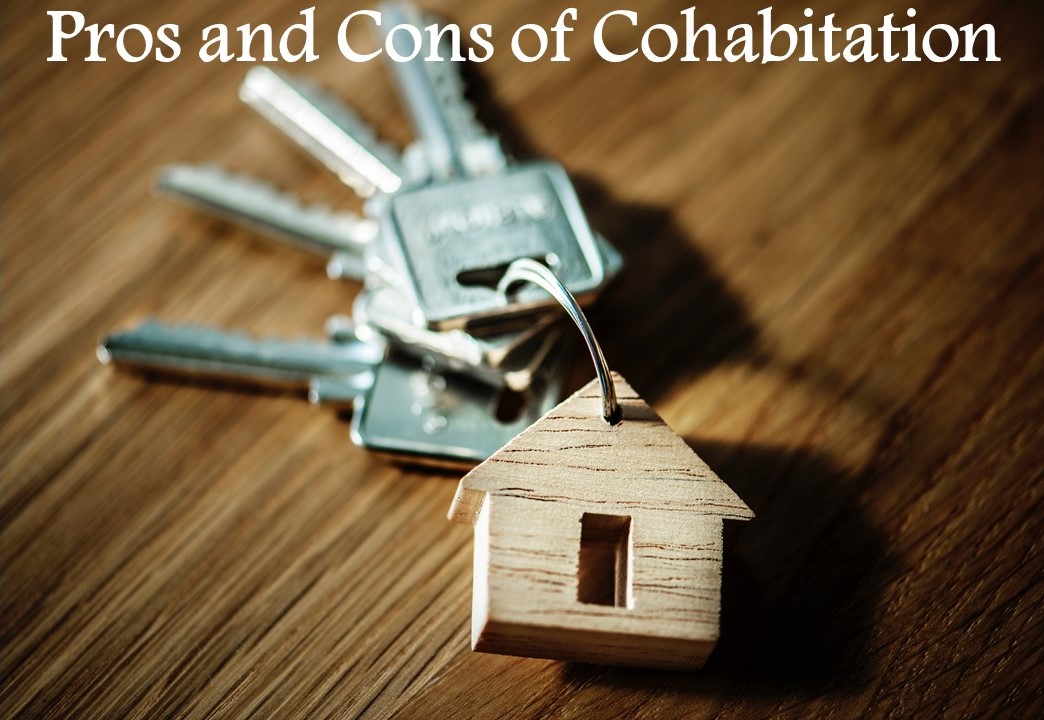 When it comes to the financial front, paying bills becomes an easier task since there are two people who are cohabitation and hence they have dual sources of income to support their home. Even though this cohabitation phenomenon is temporary and might lead to marriage, understanding each other’s financial problems and issues is a case in point that is significant right from the onset. It is always best to work with two incomes than having a solitary one. It also raises the question of both the partners working towards attaining their respective goals and thus not becoming dependent on any one person. Also they could save a lot of money this way and look after the needs and wants of each other. They could eat, do shopping and have fun – all at the same time if there are two incomes and not just one at their disposal. (Flora, 2005)

Understanding cohabitation in a much broader context, one finds that if there are troubles in between the couples and if they feel that they cannot live with each other in the future, it is for their own betterment that they split and move out. There is no legal procedure involved in such a situation and everything happens based on mutual consent. It is also possible that the partners remain the best of friends and help each other in different issues and matters of combined interest since they have a deeper level of comprehension with each other’s needs and wants. Thus cohabitation is a way to solve problems that could be had within the future and which might not be reverted back in the event of a couple getting married. There would be no way to move out of this situation as it would completely be dependent on divorce issues – an aspect that is full of pain, trauma and torture. In a way, cohabitation gives each other a little window to adjust within the local domains and to understand the finer aspects related with each other’s lives a bit more. This is a better manner in which things could shape up within the future and it is better to have a window of what is going to happen within the coming times. If it is for the good, the partners can embrace it with happiness and if not, there is room for ending the cohabitation relationship and moving further ahead with their respective lives.

Furthermore, the significance of cohabitation becomes apparent when the issue of rockier marriage arises. This is because men and women would cheat after they are married and hence there would be no looking back by the other partner. In a cohabitation scenario, if a partner cheats the other partner, there is always room for leaving the other partner high and dry and moving out of the house. The relationship ends there and then – no room for legal procedures, no court cases and no litigations at all. Cheating after marriage is a trauma that can neither be taken by a man nor by a woman, no matter whichever society they belong to. Nearly every culture has had some negatives drawn against the element of cheating in a marriage and thus all endeavors must be made to address this issue once and for all. (Boo, 1992) Also, the pros and cons of cohabitation have been outlined in cultural settings and have usually been described in detail by the cultural understandings and interpretations. Some religions like Islam are totally against such practices and even the religion of Christianity at some places and more so within the sexual domains has abstained from cohabitation in essence. (Markey, 2007)

One finds that cohabitation can have lasting effects on the women since they are known to be at the receiving end of the physical and sexual abuse by their male partners. This is a sad fact but reality hits one hard when he tries to get the hang of related discussions. It is a known thing that usually men cohabit because they seek convenience. They think their sexual fantasies would be fulfilled, a woman would cook them food, clean their laundry and put their house chores in order. This is indeed true because they are looking for a short term ‘advantage’ that they seek to take from the women. (Vangelisti, 2004) This advantage is put on hold when the male partner wants to move ahead with his life, career or both. He creates problems for the female partner and wants her to leave. This turns out to be a traumatic experience for the woman in point since she has already given enough in the name of cohabitation and now she is not ready to do anything more. She cannot revert back since she set the boats afire behind her. This is doubly problematic in the case of cultures which do not like to associate with partners that mingle in cohabitation in the first place. Putting my own life experience here, I am of the view that being a child under a single parent regime, it is very difficult to spend life this way. My mother did her best to make our lives better and she did it with the best possible efforts on her part. Thus financial issues have a lot of say in the way cohabitation could shape up within the future. Partners would think twice before reaching to decisions that involve living together and having a good time all at the same time.