Clean Needle Exchange Programs (NEPs) require Injecting Drug Users (IDUs) to return a used syringe in order to receive a new, sterile needle. NEPs in the U.S. began as a strict one-for-one exchange, with a limit on the number of needles that could be exchanged per visit and a ban against secondary exchange (i.e., NEPs supplying needles to participants whom they know will be used by someone other than the person doing the exchanging). Today many of these restrictions have been lifted (O’Neill, Topolski, and Klinkenberg 6).

Opponents of NEPs express concerns about raising the number of discarded needles, encouraging IDUs to use illicit drugs more frequently, and providing a channel for IDUs to meet other users (O’Neill, Topolski, and Klinkenberg 19; Signonssandeigo News Services, online). However, research has shown these concerns are not well founded. In 1997, the National Institutes of Health and the Institute of Medicine concluded that there was more than enough evidence to show that NEPs do not encourage increased drug use. Also, a 1997 study found that the existence of NEPs did not translate into an increase in the number of discarded needles on the street of Baltimore. In fact, other researchers reported a reduction of dirty needles found near needle exchange sites in Baltimore, as well as a 20% decrease in drug use among needle exchange participants (Doherty et al. 730-737). The same case is reported by Signonssandeigo News Services (online) where nearly 350,000 used syringes were collected in the city between 2002, when the program began, and 2005, when it ceased.  Another study from May 1997 to June 2000 compared IDUs who had access to an NEP with those trained in how to purchase needles and syringes at pharmacies. Researchers found no difference in drug use over time between the NEP and pharmacy arms of the study (Fischer et al. 199-205). 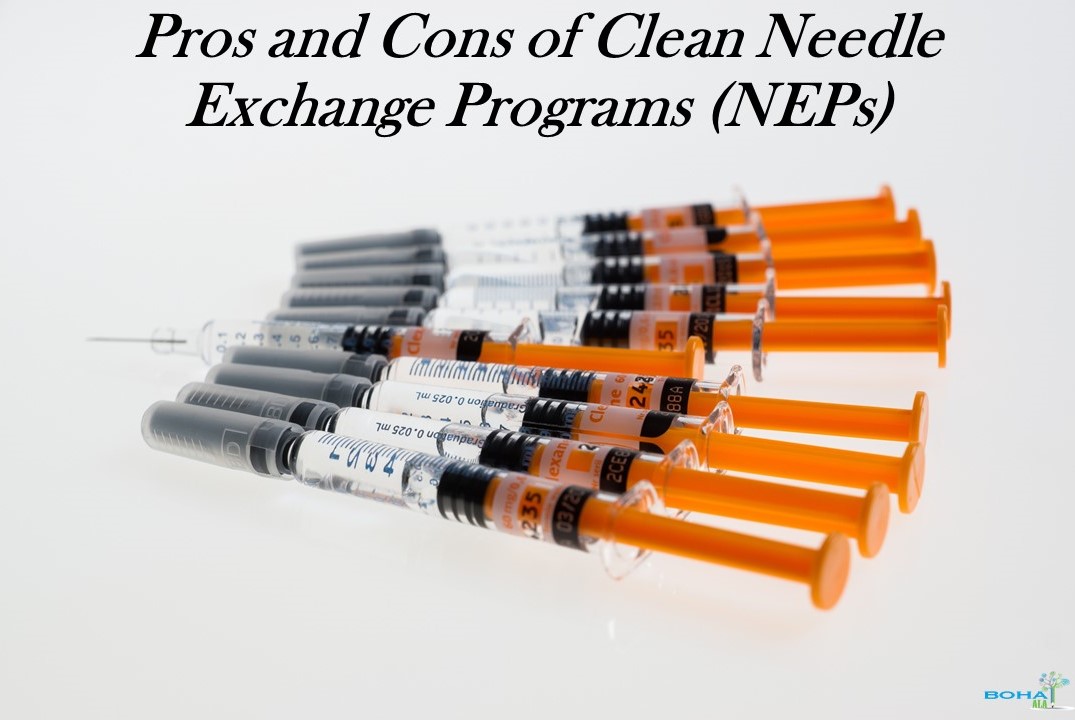 Another concern surrounding NEPs is the fear that they will increase crime. The police commissioner of Cambridge, Massachusetts (where a state-funded and legally-sanctioned NEP operated) asserted that the NEP had no impact on crime in the area or on his department’s ability to make drug arrests or perform their jobs. Drug use and drug-related crime have declined, not increased, in New York City, where NEPs have operated for many years. Baltimore has experienced similar problems in places where NEPs work. In addition, the rate of HIV infection in Baltimore has actually declined by 70% over 8 years, the presence of dirty needles has decreased, and (as of 2000) 1,500 IDUs have entered drug treatment via NEPs. In May 1997, the Windham, CT, NEP closed due to public controversy. The NEP was blamed for the city’s drug problem, discarded syringes, and even the economic decline of the city. After the NEP closed, significant increases occurred in the percentage of respondents who used an unreliable source as their primary source for needles and who reported re-usage as well as sharing of needles. Furthermore, closing the NEP did not result in a decrease in discarded needles and injecting equipment in outdoor drug-use areas. The city’s problems, which precipitated closing the NEP, remained after the closure and that IDUs were engaging in higher levels of HIV risk behavior as well (O’Neill, Topolski, and Klinkenberg 20).

From the law enforcement viewpoint, conflicts arise when NEPs compel police officers to disregard illegal actions such as allowing a person to inject illicit drugs and then swap the needle for a new one. The problem is further compounded as instruction in harm reduction allows police to use discretion in health-related circumstances. Because law enforcement has an organizational structure that depends upon, even thrives upon, hierarchical decision making, this type of “flexibility” is completely at odds with command structure. Consequently, harm reduction initiatives (especially NEPs, which are focused on providing IDUs with the means [ i.e., needles ] by which they use illicit drugs) are inherently difficult for law enforcement to embrace, much less to endorse.. However, the belief that a fear of arrest increases needle sharing among IDUs in the U.S. has been supported by longitudinal studies begun in the late 1980s. Such studies have consistently found that fear of being stopped by the police has made IDUs reluctant to bring needles, that those who exchanged needles have more convictions and legal problems than those who did not share, and that limited legal access to injection supplies has led to higher drug prices. Another study found that police crackdown changed neither drug prices nor the frequency of drug use, but it did seem to result in moving injection drug use from the area of the crackdown into adjacent parts of the city. Moreover, for officers working in drug areas, one risk they face is contracting HIV or hepatitis from a needle stick. According to Baltimore police, NEPs have increased the likelihood that IDUs will inform officers that they possess needles prior to searches, reducing the possibility that an officer will get a needle stick. Risk to officers is further reduced because there are fewer dirty needles in the environment simply because IDUs exchange used syringes for sterile ones (O’Neill, Topolski, and Klinkenberg 13-14).

Oppositions of NEPs advocate some interventions/policies to reduce illicit drug use instead.  However, such policies may actually serve to increase HIV transmission among persons who inject illicit drugs. For instance, legal restrictions on the distribution/possession of needles and syringes. But these types of policies tend to cause shortages of injection equipment which lead to sharing. There would seem to be no rationale for implementing law enforcement interventions that do not reduce drug use but do increase HIV transmission (O’Neill, Topolski, and Klinkenberg 22).

Research has shown NEPs offer a number of public health benefits in the prevention and reduction of IDUs’ exposure to HIV, HBV, HCV and other diseases (O’Neill, Topolski, and Klinkenberg 4). O’Neill, Topolski, and Klinkenberg (4, 11, 16-18) documented an extensive account of the health benefits of introducing NEPs, including prevention of the spread of HIV and other blood-borne diseases via dirty needles (see for example Paone et al. 43-46).  There is overwhelming scientific evidence that NEPs are a benefit (Signonssandeigo News Services, online)

IDUs have a number of physical, psychological, and social problems. Injecting drugs makes the user vulnerable to becoming infected with infections and diseases, as well as overdosing and having higher mortality rates. These problems tend to isolate IDUs and limit their social network. IDUs often become difficult to reach through typical health and social service information channels. These persons often show up on police records or in emergency rooms and seldom receive preventive care or supportive social services (O’Neill, Topolski, and Klinkenberg 5). NEPs do not only give a needle and syringe to an IDU. They can provide a chance to engage the substance abuser and provide an assessment, immediate treatment, and referral to needed services. Therefore, they can provide a means of engaging a hard-to-engage population while serving as a portal to much needed health, mental health, and social services, as well as sending a message that the lives of IDUs are valuable (O’Neill, Topolski, and Klinkenberg 5,12).

In addition to the public health benefits of NEPs, there are also cost benefits associated with these programs.  For instance, the lifetime cost of treating someone living with HIV/AIDS is estimated at $155,000 to $200,000, and these costs will increase in the future as health care costs increase and these individuals live longer.  However, the cost of providing sterile injection equipment to IDUs through NEPs and pharmacy sales is estimated by the CDC to be $34,278 for each HIV infection that is prevented. This cost difference is approximately an 83% savings per life when compared to the $200,000 lifetime cost of care. (O’Neill, Topolski, and Klinkenberg 4, 26)

When all has been said and done, I feel that NEPs should be legitimized.  The main arguments of the opponents against NEPs are public hygiene, increased drug use, and crimes. However, not only are such arguments unfounded, the opposite holds true. Furthermore, NEPs increase public health benefits, serve as a means of reaching out to the IDUs, and are more economical than the cost of treating HIV/AIDs.

Pros and Cons of Preschool