In April 2010, the Arizona legislators saw the need to make additional provisions on crimes and penalties related to immigrations in the state. The led to the enactment of two laws: SB 1070 and HB 2162. These two laws suffered a set back before their date of effect as the US Department of Justice filed a law suit against them. This position paper seeks to explore the pros and cons of Arizona Immigration Law.

The Pros of Arizona Immigration Law

This law has various pros, firstly, the fact that an attempt will be made to verify whether a suspect is in the country legally or not, before further action, shows an effort to respect human rights. Section 2.8b. States: “For any lawful contact made … a reasonable attempt shall be made, when practicable, to determine the immigration status of the person.” (Senate research). This is crucial as it seeks to protect the rights of lawful immigrants in the country. Section 3.f. clarifies this by stating: “This section does not apply to a person who maintains authorization from the federal government to remain in the United States.” 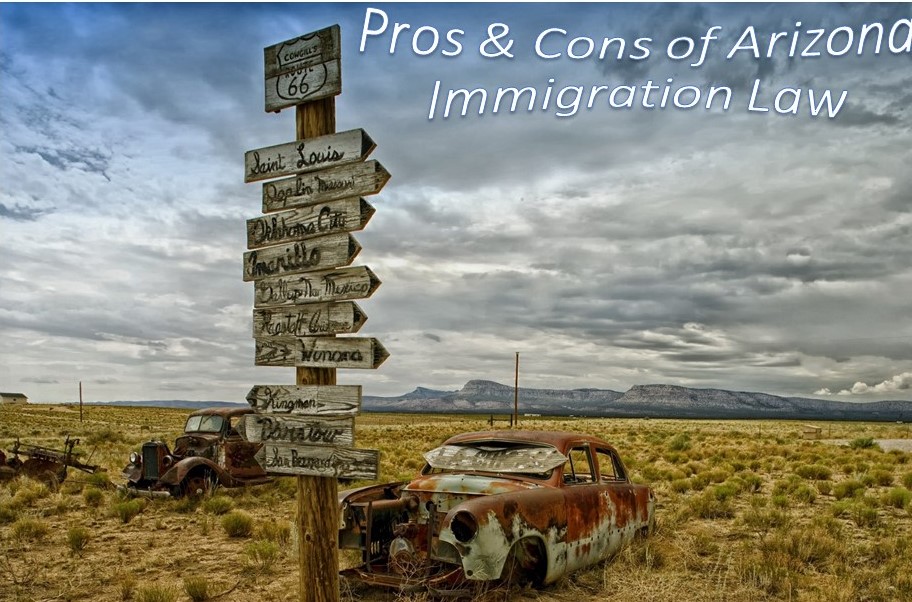 The constitution requires that governments protect their citizens from crimes such as burglary and foreign security threats. By enacting the immigration law, Arizona legislators acted in accordance with the constitution to protect the citizens. The law seeks to curb potential national threats from immigrants in possession of deadly weapons and anything that can be used in executing terror attacks. The country suffers a security threat from illegal immigrants who might commit crimes and undertake terrorist attacks hence any legislation against them is much welcomed. In the US federal prisons, 25% of the inmates are illegal aliens, and 12% of total felonies and 25% of burglaries can be attributed to illegal aliens.

The Arizona immigration law prevents law enforcement officers from color discriminations when contacting people. It provides that for one to be conducted he or she must have committed a crime. This acts, if implemented as intended, to curb racial profiling. It would be in concordant with the Fourth Amendment of the US Constitution, which states:  “The right of the people to be secure in their persons, houses, papers and effects”. Being secure in their persons means that no one will be subject to discrimination by the mere fact that they are white or black, but they will have to violate the law for a contact to be made.

The provision for a person to fill a legal suit if there is an adopted or implemented policy that hinders or limits the enforcement of the Federal Immigration Laws means the enforcers will  feel compelled at all times to act so as to ensure the aliens are kept at bay. This will act in the benefit of the citizens and the legal aliens to keep away the negative effects associated with these illegal immigrants, some being severe such as rapes, theft, burglary and terror. In addition, this law necessitates the removal of more law breakers from will Arizona.

According to the US constitution, each state’s citizens are entitled to all Privileges and Immunities of citizens in the other states. Some of these privileges include employment opportunities. In line to this, the Arizona Immigration Law (SB 1070) requires all employers to properly scrutinize their potential employees before hiring them through the e-verification in order to ensure they are legal in the country. This provision prevents the illegal immigrants from taking away jobs from the citizens and hence, a beneficial one. It further requires employers to keep a record of the employee for at least three months and  further stipulates that incase an employer has hired an illegal emigrant, he or she should be aligned in a court of law. It also gives the state the right to suspend or terminate business licenses whenever the business entities violate this legislation. This strongly defends the US citizens’ privilege to access job opportunities in their states.

It can also be argued that the Arizona Immigration Law is suitable because it does encourage self-deportation of the aliens. The law uses the state law enforcement officers to step up pressure on the illegal immigrants to leave the country. In fact, many illegal immigrants left the state for fear it would be implemented. It promotes attrition when enforced, which is a better and more rational strategy, on the side of enforcement to the immigration equation. This In consideration of the Arizona state police, the law is an indispensable tool in dealing with aliens in their usual duties of enforcing the law.

The Cons of Arizona Immigration Law

On the other hand, the Arizona Immigration Law has some disadvantages which made it generate a lot of heat when it was enacted back in 2010. Before the laws could even be effected the US Department of Justice, had already filed a law suit claiming that these laws were unconstitutional. Some citizens and police officers were already up against them. The president: Mr. Obama, too criticized the laws heavily.

To begin with, the law (SB 1070) stipulates that a contact may be made where ‘Reasonable Suspicion’ exists that someone is alien. The law did not clarify what it meant by reasonable suspicion, and this may be construed to have harmful effects. Indeed this opens a chance for racial profiling. Jan Brewer, the governor of Arizona, after signing the laws, when asked in a news conference what the illegal immigrant  looked like, she was unable to explain. The laws makes difficult for the police to differentiate the illegal immigrants from the other citizens. This could most likely result to profiling the Hispanics who form the majority of immigrants in the US. In this case, the laws would be against the four amendments of the constitution which provides that people should be secure in their persons.

Another clause on the same legal document states, “A law enforcement officer, without a warrant, may arrest a person if the officer has probable cause to believe” This is unconstitutional since the constitution clearly states in the fourth amendment that, “…no warrants shall issue, but upon probable cause” this implies that search an arrest warrants shall be only be issued when there is a probable cause. This clause in the law allowing enforcement officers to arrest people without a warrant is unconstitutional. That clause is not only unconstitutional but may maliciously be used by police officers and other law enforcers to harass the public.

Arizona Immigration Law pre-empts the president the power to grant pardons to the aliens. By stating that the sentenced alien cannot receive pardon disregards the president’s power to grant pardon as stipulated in the US constitution (Terry 105).  This may impact on the country’s finances negatively as their detainment is an expense to the country.

The law requires that the legal immigrants to carry their papers with them all the time. This is actually a burden to those legal aliens most of whom are benefiting the country. This underscores the constitutional provision of equal protection under the 14th amendment of the constitution (Williams 100). The process of the police stopping vehicles, in case of suspicion together with the one mentioned before, may act to reduce the trust and the magnificent rapport that there exists between the police and the citizens. The magnificent rapport is of paramount importance to the country’s security if it no longer exists or it is reduced the crime level would certainly rise. When the police work together with the citizens, the country is more secure, and this is concordant with the constitution.

Arizona Immigration Law also stipulates that, “Notwithstanding any other law, a law enforcement agency may securely transport an alien who is unlawfully present in the US”. This means a lot of deportations will be made without first consulting the federal government. The implementation of this law is extremely costly. During these hard economic times, it may be exceedingly difficult to deport all the aliens. Arizona may submit an alien to the federal government for deportation and be at such time the federal government’s finances are committed to other more serious issues like war against terrorism. Although one may argue that deporting the alien will help beef up security, in the cases above where the funds are engaged to more serious security issue, the federal government may consider not deporting the aliens. On the same breath, the law states that the law enforcement officers will be catered for financially by the associated agencies in the course of their duties. The financial logistics of implementing such may become very challenging and may run the state into debts.

In view of the above pros and cons of this controversial Arizona Immigration Law, I think it has more disadvantages than advantages  and do not support the legislature because of various reasons. First of all, I think, the laws promote racial profiling. Although some people may argue otherwise because after signing the laws,

“ Governor Brewer issued an executive order 2010-09 requiring the Arizona Peace Officers Standards and Training Board to establish training to ensure law enforcement officials and agencies apply SB 1070 consistent with federal laws regulating immigration” (Morse 55). I still believe it gives an opportunity for racial profiling. I believe so because it includes the clause ‘reasonable suspicion’ which may be interpreted differently by different enforcers. Some may interpret it to mean what it was supposed to mean in good faith, but still there are those who may use it maliciously to victimize the Hispanics. Such a legislature that leaves room for discrimination on bases of race is not suitable for the modern democratic America. Furthermore, it so mean-spirited, oppressive and tends to create a suspect class. In addition, it does not honor the constitutional right for equal protection.

Again some of the clauses in the legal document are redundant. There have been some federal laws making some of the things the document legislates criminal offences and providing for the penalty and sentences. Some of these are entering and living in United States without proper registration, entering US again after being deported and working in United States of America without the proper documentation. I think instead of legislating on things that are already provided for in federal laws, perhaps Arizona should have made laws creating an executive branch to ensure they are implemented because most illegal aliens are guilty of breaking most of those federal laws.

The provision that allows suing of the police if they are not fully enforcing the law is a scheme intended to hound the police agencies to step up the number of arrests made. After it was enacted, some of the police officers openly criticized the law because it was to make their work more hectic. If people resort to suing police officers who are supposed to be protecting them, then the country’s security may be at risk because the police will feel that they are working under too much duress. This has a suicidal effect to the country; of neglecting the citizens’ constitutional right of being secure.

Finally, the inclusion of clauses like, “Notwithstanding any other law” and such stipulation as, “A person who is sentenced pursuant to this section is not eligible for suspension or commutation of sentence or release on any basis until the sentence imposed is served.” (Senate research), makes it discordant with the US Constitution; hence, it violates the country’s supreme law.

What are The Advantages and Benefits of Stem Cell Research