Pros and Cons of American Capitalism

Capitalism is an economic system that is free market-based, and the goods and services are produced for profit. It is characterized by the lack of government interventions, the means of production are private-owned, and the goods and services are distributed according to the market price mechanism. The following essay looks at capitalism in the United States, and it highlights and discusses its pros and cons.

Capitalism has the implication that the economy involved is market-based. However, in the broader context of capitalism, there are different types that have multiple or different outcomes. A capitalist economy or society with some degree of regulation of inequality, environment and the monopoly of power creates different outcomes as opposed to a purely capitalist one. The American capitalist system has significant government intervention in various fields such as healthcare, education and transport.  There are various pros to the American type of capitalism. They include the following: 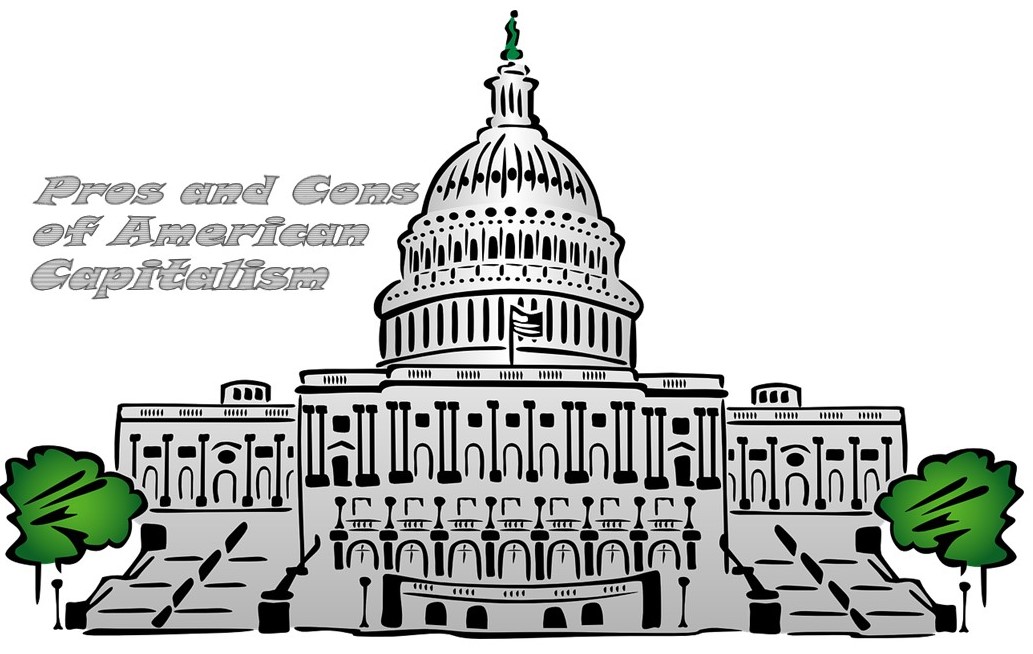 The Pros of Capitalism

The U.S capitalism system stimulates and encourages economic development. In a capitalist based system, the firms and individuals have incentives to be innovative and work hard in creating a climate promoting innovation and economic expansion.  Thus, this is helpful in increasing the real gross domestic product (GDP) growth. It also leads to improvement in the living standards because there is a creation of wealth. Thus, enabling higher living standards. In theory, everyone is a beneficiary of the increasing wealth. It creates a trickle-down outcome from the rich to the poor.

The American capitalism market has created increased competition. Competition is a natural outcome of capitalism. It is advantageous and beneficial because increased competition produces high quality products and a decreasing price of the product. Capitalism rewards firms and organizations that produce high quality products at the lowest market prices. It results in an increasing market share for the product producer. It forces firms to be more efficient in their means of product production. The efficiency pressurizes the firms to reduce product costs and avoid wastages. State-owned firms often tend to be wasteful and inefficient. For example, they are unwilling to get rid of surplus workers or methods of production that are wasteful. Furthermore, the state-owned corporations have fewer incentives to initiate innovative working practices.

Another advantage of the American capitalist society is that the private sector has the means to ownership of goods. Private ownership of assets and capital is beneficial to businesses. In countries with socialist or communist-based economies, governments have the ability to nationalize a particular company’s assets or whole sectors of the economy. The private sector ownership of property is important because it allows the firms to amass wealth needed for economic growth. Finally, capitalism in the United States allows for the division of labor which results in the specialization of labor. For example, in an automotive manufacturing or assembly facility, each employee has specific duties in which he or she specializes. This division of labor and specialization makes the production process more efficient.

The Cons of Capitalism

One of the cons of the capitalist economic systems is that private ownership of capital allows firms to acquire monopolistic control over resources.  The firms gain monopolistic power over the product, means of production and labor market. As a result, they have the ability to exploit their position to charge higher prices. Equally, the U.S capitalism society allows for the development of a monopsony power. A monopsony occurs in situations where there is a single employer with many employees. Firms and companies with such position can play lower wages because of the high job demands. It leads to a disparity and inequality between the capital owners and laborers.

Secondly, a capitalist society tends to ignore the social welfare and benefits. A profit-maximizing capitalist firm concentrates on profit maximization and ignores the negative externalities such as pollution that can be harmful to the living standards. A free market economy experiences under provision of essential services with positive externalities such as health services, education and public transport leading to an inefficient allocation of resources. In such situations, the government provides the essential public services to maximize the potential of a capitalist society.

A capitalist economy can create wealth inequality. Capitalists state that a capitalist system is fair because you gain the rewards of your hard work and efforts but often, people are born into wealth because they inherit the wealth or are born into a privileged class. As a result, capitalism not only fails to provide equality of outcome but also the provision of equality of opportunity.

Capitalism is a free market-based economic system where goods and services are produced for profit. The U.S capitalist economic system has its obvious pros, for example, increased GDP, increased competition, and private ownership of property. However, the majority of the benefits tend to accrue to those who own the capital. Thus, while it creates great wealth, it is not shared equally by everyone. It also leads to the creation of a monopoly, ignoring of social benefits and creating inequalities.

Advantages and Disadvantages of Capitalism