Home > Projects/Reports > Pros and Cons for International Students in America

Pros and Cons for International Students in America

International Students in America: The Challenges and Opportunities

When students decide to pursue their studies in a foreign country, they relocate into an unfamiliar social and academic setting. This involves coping with new challenges and opportunities. International students should cope with their new environment, without their families, friends, and other significant others. They should communicate in a foreign language. And they should adapt to a global educational culture which mainly emphasizes various ideals. Thus, this essay argues that there are pros and cons for international students in America.

So what are the pros of studying in America? Primarily, it is the opportunity to interact with people from diverse cultural backgrounds. Interrelating with people from different linguistic and cultural backgrounds broadens the horizon of foreign students. Intercultural communication enhances the learning process for international students, especially as regards different cultures. This experience makes them more open-minded and appreciative of other cultural traditions. Being an international student also brings about broader knowledge of religion, gender, race, sexual norms, and others (Choudaha 6). America is one of the most diverse regions in the world and international students here have the special opportunity to expose themselves to new cultures, languages, and ideas that they can share to everyone at home. 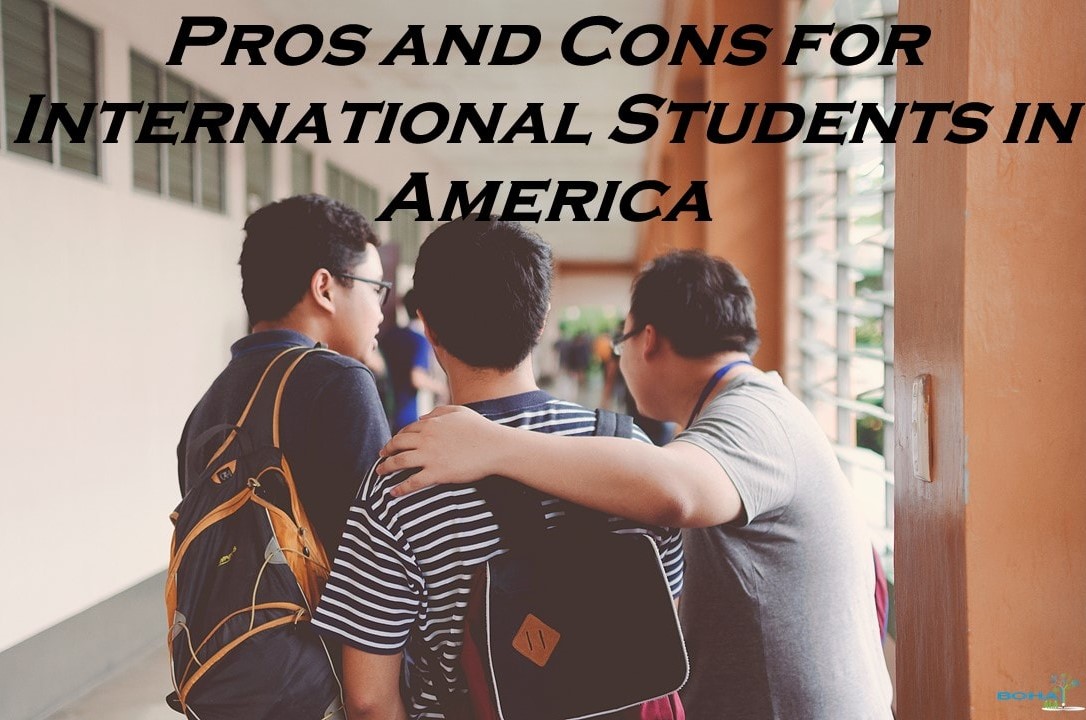 Essentially, there are many opportunities for international students in America. There are numerous ways for these international students to learn from their new social, cultural, and educational environment, like dual-degree courses, short-term study abroad programs, and workshops. Many international students admit that their experiences studying abroad are not just motivating and interesting, but also life-changing and revolutionizing (Harper & Quaye 15). However, these positive aspects of being an international student in America are usually overshadowed by the major challenges that foreign students have to confront in order to succeed academically.

In summary, several advantages of studying in America include becoming more broad-minded and appreciative of differences and uncertainty, gaining knowledge of various cultures, and acquiring proficiency in a second language. Furthermore, according to Harper and Quaye (2009), students desire to study in America because they understand the importance of experiencing culturally diverse environments to widen their own perspectives and become cross-culturally knowledgeable and experienced, and to enhance their capabilities as citizens in an increasingly globalised world.

On the other hand, several studies have attempted to determine the socio-cultural and academic adjustment difficulties that foreign students confront, and their coping mechanisms. Many studies have reported that the most prevalent academic difficulties that these foreign students confront are lack of sufficient knowledge of the proper way to interrelate and build social relationships within the educational institution, and communicating in a foreign language, particularly English. These social and communication difficulties led to too much pressure to adjust to an unfamiliar environment and isolation among foreign students, as well as discrimination from some American students (Gonzalez 34). Foreign students in America also go through several actual adjustment difficulties, like finding affordable housing, financial constraints, and time allocation.

Other studies report that the most critical academic difficulties that foreign students confront are diversity within the educational system, the significance or applicability of the set of courses to the demands and needs of their homeland, problems with their teachers and mentors, and poor English proficiency (Brophy para 1-10). Some of the most crucial socio-cultural adaptation difficulties according to these studies are social seclusion, housing, financial limitations, discrimination, and behavioral, attitudinal, and institutional differences. Some studies also discovered that communication problems were one of the most serious difficulties for foreign students in American colleges and universities. Some researchers reported that the duration of stay in America did reduce the difficulties of foreign students in the domain of communication (Gonzalez 34-35). According to Choudaha (2012), majority of foreign students turn to their peers and professors from their homelands as a part of their support system for dealing successfully with challenges. Other researchers also discovered that foreign students usually ask assistance from their advisors and teachers.

Similarly, some researchers examined differences in depression symptoms experienced by foreign students from different cultural backgrounds; and its correlation to other factors like duration of stay in America, marital status, age, and gender. They found out that there were no major variations between the different home cultures of foreign students, when they were put side by side across the different factors (Gonzalez 35). Nevertheless, within every home culture, a number of factors considerably influenced depression, like age, duration of stay in America, and marital status. A number of researchers also found out that married foreign students experienced less emotional and social seclusion, depression, and sadness than unmarried students (Harper & Quaye 22-24). According to Choudaha (2012), several researchers examined the service-related difficulties experienced by foreign students. Findings from these students showed that a large number of foreign students go through actual social and racial discrimination, had problems with job limitations and immigration policies, and financial support restrictions.

Foreign students who do not have sufficient proficiency in English also endured social and academic difficulties, like failure to make friends and inability to obtain graduate admissions. Another research discovered lack of social interaction or exposure with Americans and poor English proficiency as the most crucial adaptation difficulties of Spanish-speaking foreign students. Another investigation of Spanish-speaking foreign students was conducted by Ramos-Ruiz (Gonzalez 35). She discovered that these Spanish-speaking students viewed Latin American teachers to be more focused on individual learners, and American teachers to be more passionate and involved in their instruction. They previously believed that American professors are more knowledgeable of other cultural backgrounds, but they discovered that they are unversed in global education (Gonzalez 35). Hence, their opinion about American teachers was indecisive, ranging from being enthusiastic to fairly difficult and disappointing. These foreign students believe that American professors are not aware of or sensitive to their adjustment problems, and require a certain level of training to broaden their knowledge and awareness. It appears that social adaptation difficulties can generate some traumatic and tense situations for foreign students in America.

Furthermore, several researchers have examined adjustment difficulties of the families of foreign students to the American culture. Vogel, for example, investigated Japanese spouses of foreign students at Harvard in an effort to broaden knowledge of the adaptation difficulties of international families. It was discovered that it was quite challenging for these Japanese spouses to build interpersonal and social relations within the American culture; problems that led to persistent feelings of social isolation, depression, and anxiety (Gonzalez 35-36). These adaptation difficulties were also affecting adversely their relationships within the family unit.

Furthermore, some researchers created a cross-cultural adjustment framework that can be used to mitigate adaptation difficulties of foreign students and their families in America. These researchers suggested that cultural adjustment requires three mechanisms: familiarizing the self-image of an individual to the unfamiliar social standards and behaviors; adjusting attitudes and behaviors to these unfamiliar social standards; and gaining knowledge of new social standards (Steinberg 24). It is assumed that foreign students can become skilled at developing effective coping mechanisms within the cross-cultural framework. In addition, a research carried out by the National Association for Foreign Student Affairs (NAFSA) discovered that universities in the United States have to create ways to help families of foreign students adjust to their new social and cultural environment (Gonzalez 36). Lastly, other researchers have conducted a survey of the adjustment needs of foreign students. For example, some researchers discovered that the effective adjustment of foreign students was associated with taking part in a spiritual community or religious group, belonging to highly educated families, gaining English proficiency, and frequently interaction and communication with Americans (Brophy para 2-7).

However, the most widespread difficulties confronted by foreign students are psychological. Foreign students usually confront loss of self-worth and identity, isolation, estrangement, anxiety, loneliness, and homesickness after they move to an unfamiliar society. They should adapt psychologically. The duration of this psychological adjustment depends on the circumstances of foreign students, such as level of self-efficacy, support mechanisms, earlier experience in socio-cultural adaptation, and level of English proficiency (Harper & Quaye 19). Majority of foreign students, regardless how well prepared, are vulnerable to bouts of depression, isolation, and homesickness because of lack of familiarity with their environment. Feelings of defenselessness and despair also often arise, at times resulting in depression. Because numerous foreign students are confident with their capabilities and have great expectations of their future in the American soil, they may experience inadequacy, resentment, and frustration after they go through failures and problems (LaFranchi 2). According to Choudaha (2012), foreign students who are high achievers in their homelands are specifically vulnerable to these psychological problems.

Know self and others; make friends and build friendships with peers; expand individual worldview; ask help and handle problems; establish cultural and social contacts; build relationships with advisors and instructors; become proficient in the English language; and use the tactic of “letting go.”

However, these techniques are only effective if the educational system adequately helps foreign students.

Furthermore, several researchers have concluded that the level and frequency of interaction with their American peers have a favorable impact on the psychological adaptation of foreign students. Nevertheless, foreign students choose to ask for assistance from people sharing their cultural practices and language, and infrequently from other foreign students. Hence, the most valuable key to effective psychological adjustment, building strong social relations with other students, is also the least probable to take place in reality (Gonzalez 37). American universities and colleges that understand such challenges should encourage involvement of foreign students in school programs and activities. They must also promote relationship-building with other students by developing different cultural programs and enlisting foreign students as volunteers (Brophy para 8-10). Efforts to raise the awareness of national students may be useful in facilitating their communication and relationship with foreign students.

The current American educational system has been massively diversified. The student population and faculties are gradually becoming fully globalised. As a result, the educational experience is going through remarkable transformations. Foreign students enhance the educational experience as they expand cultural diversity. Even though there are obviously more challenges confronted by foreign students in America than opportunities, it remains true that these international students choose to defy these challenges in order to gain the benefits of cross-cultural education. Therefore, American universities and colleges have to establish strong support systems for these aspiring international students.