Problems faced by Walmart in India

Wall-mart the retail sector had driven the major economic boom in all over the world. Wall-mart

introduced its chain in developing countries of the world. In 2009, Wall-mart opened its first outlet in Amritsar, India. In Indian retail market, Wall-mart faced barriers to entry, political and legal condition from the government were also becomes obstacles for Wall-mart.

Problems faced by Walmart in India

In September 2012, the Indian Government announced that, for emerging economy and for the growth of the urban middle class, Wall-mart with huge opportunities and channels, takes place in India. There were so many oppositions of the Wall-mart that it should not be opened. The oppositions were from the intermediary and the small “mom-and-pop” retailers. There were the problems with the current state of India, the problems with the existing supply chain and with the infrastructures. Wall-mart and other foreign retailers in India are suffering loss because of poor management, there are many small retailers, and people of India buy products at lesser prices from those retail stores, India has poor infrastructure, foreign investors have to spend more on infrastructure, supply chain is also a bigger problem in India. Consider the case of Wall-mart; it was the first retailer to announced, that they directly sell products to the customers, as most of the Indian farmers are earning very lesser, so they cannot afford to buy products in Dollars. The government of India has imposed various conditions on multinational retailers; the taxation by government is a kind of obstacle by Indian government, as government demanded to invest $100 million in India for “back end” operations. 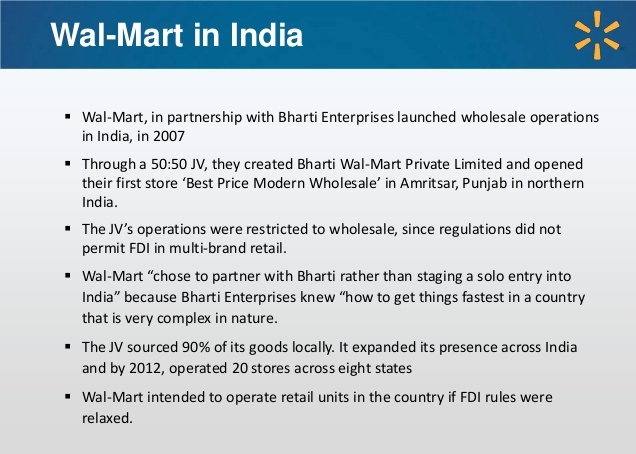 India believe that, the entry of Wall-mart can destroy the employees rather than creating it. In 2005, Wall-mart requested the government, to give them permission to open the experimental retail stores in Kolkata, Wall-mart also but the food, which is produced locally, but Wall-mart, was not given the permission to open its retail stores, as Indian government did not open the retail sector. Trade union also abandonment the Wall-mart, there were no friendly approach, and protest take place. Indian government does amendment in the policies; the multiband retailing opened the Indian retail sector, which was considered as the drawback of the economic growth. There were cultural issues, as there are people in India from various and different cultural, not all of them supported or buy the America products, the CEO then take decision for existing expansion. There were language barriers faced by the Wall-mart, the mixture of culture and emotions were against the entry of Wall-mart to India. Wall-mart has taken care of the social and ethical responsibility because it is a serious issue.

Chain Acquisition, of the matrix applies most directly to the India. Today, global supply chains connects the producers in all parts of the world, distribution channels and sophistication logistics are exploit to ensure the system regarding supply chain management. The American Marketing has defined the channel of distribution as, a network of agencies and institution, which performs the activities, requires accomplishing, market tasks. The supply chain of India need improvements, because it the movement of goods through channel; if channel is not effective and efficient then movement will be unsuccessful and result in failure. For total marketing program, great products should be given at right price, and communication or logistics should be efficient. Supply chain problems should be managed through effective decision-making. Wall-mart faced lot of problems regarding supply chain in India, forecasting is important while managing the supply chain, as thing related to transportation, inventory maintenance, warehousing, packaging etc., are included in supply chain management. For chain acquisition, long-term planning is needed. In India there is need to focus on the chain, acquisition processes if they want the growth of foreign retailers in India.

If Wall-mart wants to get success in India, they have to set up wholesale and retail stores. Indian agriculture sector should be focused to improve the productivity and to speed up the flow of other goods. Wall-mart need to work with farmers to improve the yield and quality of services, they should deal with the local partners, if they want to understand the joint venture and culture of India. Wall-mart should do the partnership with the Indian companies, to get the benefits. They should focus on the strategies that how they could get advantage from human resources, there is need to study and understand the cultural and business of India, market segmentation should be done regarding effective price, for the attraction of the people. There is need to deals and look after the infrastructure and supply chain; supply chain should given attention, as it is the key to any business. It is necessary to build the direct relationships with the farmers and manufacturer, so they could be encouraged to make the products, which can meet the international standards. Production should be planned and demands regarding technology should be predicted. Bharti-Wall-mart would be successful in India; there is just need to take effective steps, for second revolution from Wall-mart.

Mike Duke, Wall-mart CEO, have to accept the challenges faced by his company, he knows that people of India are missing opportunity right now, due to inefficiency of the supply chain. However, Duke is moving ahead to make a successful market for Wall-mart. Wall-mart is doing contracts with local companies and hoping to join the global supply chain.

Leaders are Born not Made Summary

The English in this article needs to be improved. There are a lot of grammatical errors. However, thank you for your effort in making this information available.