Problem of Institutional Racism in USA

Currently, in the United States, institutional racism has become a problematic situation that has changed the way we have considered social standards, which in exchange has caused changes in the way education, politics, and job careers are being affected. Institutional racism is a certain pattern of societal associations such as colleges, banks, government organizations, or courts of law, which portray a negative action towards a particular group of people based on their ethnicity or race. Institutional racism is currently a major problem because it is dehumanizing people based on a person’s skin colour. Not only do we arrange of negative treatment and impacts on specific groups of people, but there are various acts of violence against these groups of people which is completely wrong. Institutional racism is present in society’s institutions of colleges, government organizations, and job careers. Which in totality has affected people by its conception of prejudice and negative treatment by basing off a group of people’s skins colour or race? Institutional racism is not only a current problem in American society, but in fact, is the undying concept that remains present since the 1600s of Slavery in the United States. Which remains to this day but has blended in society due to an illusion dispelled amongst people’s eyes which has remained hidden by the expectation of society, although it remains present. Institutional racism has become a societal standard, and there has been nothing to prevent it. Although many believe there is nothing wrong with institutional racism, and believe there are laws to treat mistreated people, there are laws enforced upon the misconduct of those who been mistreating. Still, that is not entirely true. Institutional racism has remained significant in the United States for a long time, which can portray from the Enslavement in the U.S., which continued through the United States for almost 200 years. Which expected as a social standard at that time? Whipping, torturing, and killing people to work, because they did not fit society because of their skin colour and remained as a societal standard. Why don’t we take that into consideration of misconduct? Institutional racism continues even currently in the United States in the medical field, and there are particular groups of individuals based on their race and ethnicity who have mistreated which has led to multiple deaths because one race is considered insignificant from another. Why doesn’t that be considered as mistreated? Why aren’t there any laws for misconduct here? Why are people getting away basically with murder? For example, at high school, there was a young African American female student by the name Yunique Morris who was having significant health issues related to chest pain and was not getting the medical attention she needed, doctors insisted that she was having a little pain of inflammation, and that was all. Nevertheless, on July 6, after passing out and vomiting, Yunique was rushed to the hospital to find many blood clots in her chest, within a few hours, Yunique passed away. Which shows that it is not right; we are letting innocent lives taken away, lives that could have been saved. But why? Just because of their skin colour, they mistreated not treated as humans and are left to die. Not only do we see this array of negligence in the medical aspect of society’s institution, but also college institutions. For example, following junior year of high school, was taking the ACT, and the exam administrators sent five random assistances to check IDs to check whether it is indeed the actual person taking the test under the name. Near me was my friend Donja’e Lindsey, who was an African American. Out of all the five assistance, Donja’e was targeted all five times. I was never targeted. Nevertheless, several other African American students which I could see from far were asked for IDs. This shows that there is clear institutional racism. After completing the test, I asked my friend Donja’e how he was feeling after being when he was targeted all five times. He told me, “Karanvir, this is not the first time.” It disgusts me the fact that some individuals must live their whole life being judged on their skin colour, expected to do unexpected things, and sometimes always pointed out for the wrongdoings. However, we question whether institutional racism is a major problem in the United States. Currently, in the United States, we see a significant amount of institutional racism against the African American community. In an article by Jeff Nesbit, the director of the National Science Foundation legislative and public affairs. Nesbit explains that in the United States, there is a higher chance of suffering from institutional racism if you are from an African American descent. In the article, Nesbit explains that African American children at younger ages are three times more likely to get suspended compared to a white kid. In juvenile detention centres, African American juveniles are 18 times more likely to be sentenced as adults than compared to white children and makeup 60 per cent of children in prisons. Moreover, African Americans are pulled over more frequently because they condemned to be more susceptible to criminal behaviours. This helps explain why institutional `racism’s current problem in the United States is. Making one race and ethnicity treated more negatively is just completely wrong. 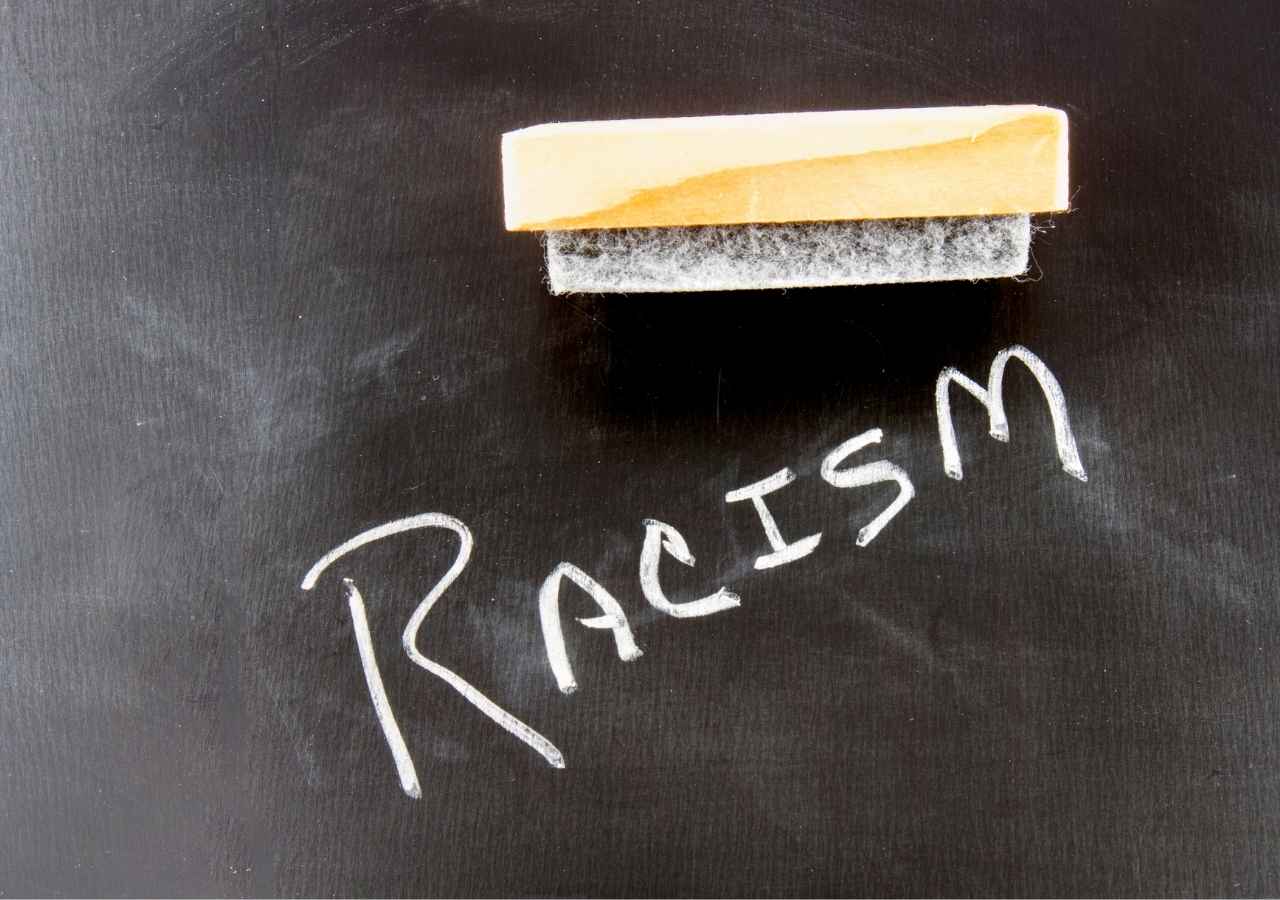 Although some may argue that government organizations have enacted laws to eradicate institutional racism and have enforced heavy penalties against law enforcement officers who have been racial discriminating, racial profiling, or abusing their powers, others may say there was the removal of slavery with the Proclamation of Emancipation, or the case-law of Terry vs Ohio, which limited law enforcement officer to arresting or searching a suspect without reasonable suspicion that a person is committing a crime. Even the case study Graham vs Connor, which banished the rule of excessive or unnecessary force against a person law enforcement is arresting. However, with all these laws being passed, there is still a current trend of racial discrimination and racial profiling, in the article by Mia Mercado, a lifestyle writer on racism in legal systems. Mercado makes several statements that with new law enactments and many laws passed to prevent or eradicate racism. Racism continues to surge in the United States. According to the NAACP’s criminal justice sheet, the population of prisoners in the United States has been rising within the last decade.

“In 2001, one [out of] six [African Americans] had been” wrongly convicted in some time in their life, compared to today which has risen six times more of the rate compared to 2001. With new laws to stop racial discrimination and surge of racial profiling in law enforcement, the question remains. Why aren’t there any decrease in the crime rate of African American? If some point out the fact that laws were passed to help prevent law enforcement from racial profiling and racially discriminating. If laws were passed to reduce any form of racism in the legal system, why aren’t they working? That is because they are not working at all. Law enforcement officials continue to abuse their power of authority. They continue to go their ways.

Furthermore, in the article by Minyvonne Burke an NBC news reporter explains the case of an Atlanta officer who shot a 27-year-old African American male Rayshard Brooks in Wendy’s parking lot who was intoxicated, and was shot by officers for not complying commands. Although reviewing body cam footage show Brooks complying to commands, and then suddenly shot running away from the officer. Both officers on duty were placed on administrative leave. Both officers were not convicted for the murder of Brooks and continue to work for the Atlanta Police Department. Shows the reason why there has not been a change to institutional racism in legal systems, we have innocent lives taken away who were considered prone to criminal behaviours by law enforcement—leaving both white male officers safe from the situation. The questions remain how these laws have benefitted at all towards institutional racism, and how have they impacted anything. The answers are simple, by no means have the laws passed to prevent institutional racism affected anything. Institutional racism continues to be a significant problem in the United States.

In conclusion, institutional racism is a current problem in the United States, and it is a significant problem and must be eradicated. With societal changes, it seems to be an expanding problem and has significantly impacted social institutions in schools, government organizations, and job careers. It has been a problem for society and continues to be significant problems as it has been faced with racial profiling, believing an individual to be prone for criminal behaviour. Police brutality, hitting and heavily injury an individual because they seem to be resisting law enforcement orders, even in medical practices, where they are left to die to hidden symptoms of death-related issues. Educational background was that students are profiled continuously and accused of cheating or acting suspiciously in classrooms. In job carriers were individuals have been hopeless of finding employment. All scenarios with the same major problem. Which are the skin colour and the expectation that society has made of being desperate, reckless, violent, and unimportant?