On January 23, 2015,  life changed for my 15 years old cousin. He had been having hard times with his classmates and teachers at school, and had been regarded as a “slow learner”. Why? He hardly gets extraordinary things his peers get done effectively and conveniently and finds it difficult to grasp simple sums and arithmetics, but he kept trying harder. However, that day changed his life, his teacher taught him the power of positive thinking, attitudes, and a better approach to doing things he lacked. He repositioned his thoughts, attitudes, and started working towards success. After some months, things got better for him, and he became powerful through his successful thoughts. Therefore, there is power in an optimistic life. Against common belief, the impacts of optimism on people’s daily life are of great impact. “People who are optimistic enjoy the results of greater achievements, better health, and more happiness.” (Stankevicius et al., 2014) Despite the most known ideas that being optimistic may harm people by absorbing their power. In fact, being optimistic help people to survive in better life conditions by psychological, physical and also time-saving benefits. 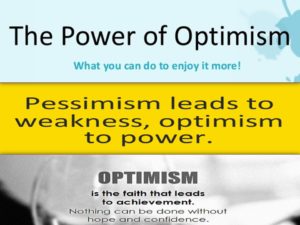 What is the importance of being optimistic to be more powerful?

Nobody associates with failure, sickness, or disaster. But everyone desires prosperity in all ramifications. Optimism is the thought, attitude, action and decision geared towards solving situations that appear to be complicated and impossible. It is that the attitude that tends a person to hope expect, or reassured that anything around him becomes successful. Several importance of optimism link to power is explored in the paper written by Puri and Robinson, 2006. Organization’s success is based on optimism as it is the root of many economic phenomena, it is important in financial intermediation, it can create an impact on corporate financial and accounting decisions as well as inflate prices of security when there is the presence of short-sale constraints. A moderate optimism is equivalent to commonsensible economic decisions while extreme optimism is equivalent to superficially irrational decisions (Puri & Robinson, 2006)

Optimistic people tend to be happier than pessimistic people. According to a Peale, 2006, it was established that people who are optimistic work towards achieving success through their self-confidence which leads to self-realization, as well as successful achievement. (Peale, 2006) Therefore, when a person achieves all these, he is said to live happily all the rest of his life. In the simpler sense, optimism leads to the creation of one’s happiness. Peale, 2006 uses a scenario of a television celebrity who had a guest to feature on his program. The guest appeared to be a very aged man – an uncommon old man indeed. He seemed to be continuously happy all his life, anytime he says anything, the audience kept roaring in laughter. He was simply loved by all, and the celebrity was satisfactorily impressed by this man’s lifestyle. The man explains his reason for being happy always is because, whenever he wakes up every day, the two choices before him, is either to be happy or not, so he always chooses to be happy. (Peale, 2006) Therefore, happy people are positive people, and they achieve great power through their happy lifestyle and the success in their lives.

The Importance of Being Optimistic for a more Successful life

Being optimistic implies being a positive, constructive, and creative thinker. Which implies that when a man is optimistic, success cannot be far from him. He sees opportunities in every aspect of life, whether positive or negative situations. According to Peale, he says “when you expect the worst, you get the worst, and when you expect the best of life, you get that best.” People who believe in optimism are always plugged into believing that all things are always possible even in the sight of impossibility. The mental system is the human nature that causes things to happen. Our lives are based on our psychology, which is the process of our behavior with respect to our immediate environment.

When the mind of a man is geared towards success, he is seen to actualize everything through his realm of possibility. (Peale, 2006) Although, this doesn’t mean that a total believe brings everything to you, but adjusting one’s lifestyle to seeing positivity in every situation brings one to a limelight of life. Therefore, in every ramification of life, attaining success demands a positive mind which recognizes success and not a failure, sees strength in the face of obstacles, see greatness in one’s ability and recognize opportunities in all areas.

The Benefits of Optimism for Depression and Chronic Stress Reduction

Optimism plays an important role in reducing depression and chronic stress. According to Stankevicius et al., optimism leads to better health, and low optimism leads to depression and anxiety. (Stankevicius et al., 2014) However, optimism offers substantial health benefits, it keeps stress and anxiety at bay, and optimistic people are relaxed, they don’t see any negatives in any situation. They are stress-free, they don’t bother about life situations unnecessarily and this helps them to live a health-safe life and keep blood pressure down. In fact, optimism helps one take care of themselves because their positive thoughts would be surrounded by ensuring all the safety health tips to keep them strong. And powerful. People who are optimistic tend to live longer. (Puri & Robinson 2006)

The Benefits of Optimism for Human Body and the Systems

Good health is always around an optimistic life. Optimism does not put a person in frailty state, otherwise, it empowers a man. A study from Sheier & Carver, 1985 shows optimism to be a powerful tool that emphasizes on physical symptoms that are health-related. When people are focused on achieving a goal, optimism plays a role of self-consciousness in systematically coping effectively in the course of achieving a particular goal. (Sheier & Carver, 1985) Also, it keeps the body system on a low blood pressure, this is because the mind is always rest assured of a positive result from all situations around it, thus leading to lower anxiety and therefore, lower blood pressure. Additionally, the human body appreciates less pain, however, a pessimistic person would have more tendency to feel pain since they always expect pains, while an optimistic person would live mostly painless, this is because their positive thoughts put them on a level of a higher pain tolerance. (Nikalls, 2015)

Optimistic people are people who see opportunities in life events to achieve a goal. According to Anderson & Galinsky, 2006, it was established that optimistic individuals often feel some levels of power and therefore attempt to take measurable risks. However, people who do not have optimistic power also take risks, though a high level of risky behaviors relating to drug use, behavioral habits, and sexuality. (Anderson & Galinsky, 2006) Also, being pessimistic leads to social exclusion, and this produces a negative and self-defeating behavior. Which implies that an optimistic individual is someone people would love to associate with and would be inspired by great steps and positive risk taking activities. The analyses carried out by Anderson & Galinsky also show that being optimistic in risk taking perception does not affect  the gender, but depends greatly on the power of the mind.

Effects on Brighter Future through Optimism

Being an optimist affects the thought streams – positive mindsets at all time. Optimists have the believe that the outcome or result of their endeavors will definitely be successful. They see the future beyond the natural, and they expect all go very well. They are often faced with challenges but they are reassured of a final positive outcome. This kind of mindset affects the future of a man. An optimist believes he is responsible for his happiness, and he only expects to see good things occurring in his future. The effect optimism places on a person’s future includes, successful marriage, career actualization and manifestation, they don’t worry about obstacles and challenges, no beliefs in defeat, and they confidently solve individual and conventional problems. (Peale, 2006)

Optimism itself cannot work alone, it is based on realistic actions and mindset. It does not also work for everyone. According to Peale, optimism for success in career is based on a job, profession, or career. A person can’t be sitting at home, read posts, books, and blogs about optimism and expect financial success to start rolling in without a job. However, an optimist can always achieve securing a good job offer with a positive mind. An optimist can achieve entrepreneurial opportunities.

For every problem that happens to a man, there’s a purpose and a cause behind it. When people are faced with depression, ill-health, or failure, only believing there could be a change wouldn’t help things. But acting towards or against such cause with a positive mind and attitude will help solve that situation.

The destiny of everyone is diverse, and the human race is not created equally. However, many rules of living positively help a man, but  not every man achieve same results another person achieves from the same problem they are facing. For example, every student in a class has to write the same examination, and every student believes he or she would come out with good grades. However, when the result is out, not everybody achieves that excellent grade they desire. Therefore, optimism may work better for some people and even culture and may not work for others.

Finally, optimism may also prevent people from seeing clarity or the reality of a cause of action. In real life situations, an optimist doesn’t want to see impossibilities in any situation, and they, however, do not realize the dangers and risks embedded in a cause of action. As much as optimists are focused, their blind faith keeps them totally abreast of underlying situations, but they sometimes fail to see there may be hidden troubles looming from such situation.

Optimism is the right way of life. It clearly puts us in the right dimension of life and what we desire. It is necessary to be moderate in optimism because extreme optimists may be found strenuously living a life to suit his positive desires and then he is led to some financial behaviors that are not prudent enough. Also, according to Peale 2006, optimists always had to work for longer hours, save more money,  like ensure the payments on their credit card balances are on time, plan to retire not soon but very much later, and invest in individual stocks. But extreme optimists wouldn’t work more hours compared to the moderate optimists, they save less, likely to pay off the balances on their credit cards on time, and are likely to engage in some kind of unrealistic behaviors. Therefore, being moderate in an optimistic living is the good life to live.

I really learned a lot about optimism by studying this article. thnanks

awesome , thank you, the truth , and only the truth , I pray my optimism grows and benefits me and who ever I come in contact with , cheers.