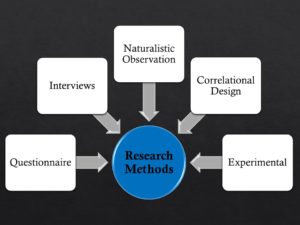 This can be divided into open source and closed source. Open source allows people to give full opinions, and lots of data can be obtained, for example, tell me what you think about boxing. While closed sources generate quantitative data which is much easier to analyze, the answers obtained are straightforward, which could be yes or no. For example, do you like boxing, do you agree with boxing?

This can be divided into structured, unstructured, and semi-structured interviews.

This follows the ethnographic approach. In this type of observation, people’s behavior is observed and recorded. Naturalistic observation is realistic, It is what goes live. Doing this requires some ethical implications, and it’s necessary that carefulness is taken when recording the observations. Otherwise, when they are noticed, they might change their behaviors and the goal of naturalistic observation wouldn’t be achieved anymore.

Correlations are statistical procedures, and it is used to show that two variables vary together. For example, as the temperature goes up, people buy more ice creams – that’s a positive correlation.

This involves a study in which the researcher tries to manipulate a variable, while still measuring the other variable.

The findings from the video regarding cell phone use

Correlational design and its Appropriateness for Researchers

It is appropriate to use correlation design because it clearly depicts the relationship between the variables used for an experiment.

20 Cute Kawaii Gifts and Accessories You Can Buy

The Effect of Cloud Computing on Network Management