Home > Subjects > Economics > Neuroeconomics and The Process of Decision Making

Neuroeconomics and The Process of Decision Making

The Process of Decision-Making in relation to Neuroeconomics

Fundamentally, Neuroeconomics concentrates its approach in the identification of some neuronal correlations that are specific to choices (Glimcher et al. 2009) and is the earliest area of the economic sciences that focuses on the way in which the human brain acts towards its social and institutional environment for economic decision-making. (Glimcher et al. 2009) According to Rustichini, (2008) Neuroeconomics is a natural expansion of bioeconomics, and its previous concept is the study of the developed mechanisms that are part of the decision making at the neural level of the brain. (Zak, 2004) Applying the conceptual structure and also the experimental techniques widely make use of neuroscience in the study of economic behavior. (Glimcher & Rustichini, 2004) Moreover, Neuroeconomics incorporates the methodological and theoretical developments of cognitive neuroscience, psychology, computational neuroscience, and economics to attain the investigation of the brain processes when people make economically applicable decisions. (Montague et al. 2007)

When analyzing decision and economic behavior theory, it is necessary to elaborate a model which assesses in a 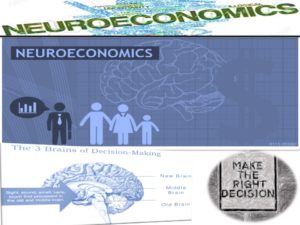 more accurate way how individuals tend to make their decisions. (Glimcher & Rustichini, 2004) Also, when investigating the process of decision making, different methods, tools, and techniques of neuroscience are employed. Basically, several researchers make use of tools that takes records of the electrical and metabolic activity that goes on in the human brain and the electroencephalograph (EEG), magnetic resonance imaging (fMRI), transcranial magnetic stimulation (TMS), positron emission tomography (PET), etc. These tools give answers to the questions of interest both in business aspects, commercial area of marketing, and academic area. The understanding of the use of these tools explains the neurobiological mechanisms of the human decisional process. (Pradeep, 2010; Zurawicki, 2010; Camerer, Loewenstein & Prelec, 2005)

Finally, behavioral economics is regarded as an extension that develops on existing foundations, and as a result differs from other dissident approaches that would just deny several mainstream analysis of economic phenomena. Thus, behavioral economists have been able to influence a larger part of economics and allied fields. This is also why, behavioral economics neuroeconomics relies on various assumptions about individual human behavior that demonstrate the results of psychological researches, and the more they become firmly rooted, the more findings and discoveries are made to deduce the science about the human behavior. (Constantinescu, n.d)

Aim: What I want to Know/Prove/Explain/Test/Examine

This paper aims at reviewing neuroeconomic research in all areas of interest to psychologists and economists: where decisions have to be made under uncertainty and risks, social decision making, and intertemporal choice.

Through deep study about this topic, considerable progress and development has been made through the last two decades, and progressively, economists wouldn’t stop taking up the challenge of connecting economic theory to psychological foundations and structures.

Basically, the findings of behavioral economics tend to provide hope for the improvement of our ability to deal more effectively and efficiently than with such complex interdisciplinary matters as environmental safety, health, or even the organizational behavior and national development. (Bica, n.d: Constantinescu & Madalina, 2007)

Neuroeconomics defines decision-making as the product of brain processes relative to anticipation, representation, selection and valuation of choices and opportunities. Neuroeconomics also carefully analyzes the whole process of decision into mechanistic components. This is realistic in certain brain areas, representing the value of the result of an action prior to the decision, some parts of brain areas may then represent the value of action while others may represent the values at the moment of the decision making process. Although, such dispersion of data may look confusing, however, economic psychology provides a useful system for the understanding of rationality mechanics at the neural level based on a coherent manner. (Constantinescu, n.d)

This paper will utilize the Kahneman’s description of cognitive processes which is associated with neural structures and processes in relation to some variables. Daily utility maximization is more to feelings and less to the major objective outcome of the decision: Humans use emotions to anticipate emotions for the purpose of controlling behavior toward the maximization of positive emotions and also the minimization of negative emotions. Therefore, the neuroeconomics picture of human rationality is emotive through and through. (Akerlof, 2003)

Utility is necessary in decision making. One of the major concepts in economics I s Utility. Economists assume that individuals assign a utility for every option and then decide on which choice to make by comparing these utilities. (LeDoux, 1996) An important aspect where neuroeconomic tend to contribute is in the identification of neural substrates associated with various economic concepts and also in the understanding of their psychological functions. According to Kahneman et al, they were able to distinguish between decision utility which implies the weight of the outcome of a decision, and experience utility which implies its hedonic quality. (Kahneman, 2002)

Furthermore, Benhabib and Bisin, (2002) were able to visually present different gain and loss expectations and outcomes with the use of various roulette wheel “spinners.” When they used fMRI, they were able to find out that responses to expectations and outcomes were mostly, but not usually, seen in the same regions. With the use of gambling task, knowing too well that gamble is not something that could be resolved instantly, Tom et al. (2007) demonstrated that potential losses (that is, decision utility) tend to be represented by the decrease in activity in gain-responsive regions and not by the increase of the activity in regions associated with the prospected and experienced negative results. (Tom et al, 2007)

Furthermore, emotions perform major roles in the human decision making process. An important aspect of human decisions is based on particular emotions that flow through us at a particular point in time. Since it is difficult to measure emotions based on quantitatively analysis, traditional economic studies often tend to ignore such influence and take emotion away outside the scope of the decision making study. Behavioral economics starts to devote more attention to the role that various emotions play in decisions. (Constantinescu, n.d) An important aspect of this is the regret theory. This proposes that the fact that decision-makers can foretell the regret they would eventually experience when they realize that the selected outcome is disadvantageous when compared with the alternative outcomes relatively available, especially if alternative choices are chosen. (LeDoux, 1996) Additionally, the regret theory states that individuals would decide to choose options in which there’s a possibility of it being minimizing the future regret. (Loomes & Sugden, 1982: Bell, 1982) Neuroeconomics studies based on regret support these assumption closely. Lastly, the role emotions play is highlighted in the framing effect. Framing effect is the phenomenon that people choices are unusually susceptible to the way in which alternatives are presented (Kahneman & Tversky, 1979: Tvester & Kahneman, 1989)

Moreover, economic decisions are better evaluated in social context. Conventionally, human often make decisions in social circumstances. According to the game theory, which states that individuals make decisions depending on the prediction of others’ probable actions and the related outcomes. Studies in Neuroeconomics have demonstrated evidence to support this fact. Recently, a number of studies have demonstrated that decisions in a social context are basically closely related to theory of the mind, which explains the ability to attribute various mental states to one’s self and other people to be able to explain and even predict behavior. (Constantinescu, n.d) Cooperation behaviors, especially the ones that occur among strangers are usual, but still not well-explicit to economists. Additionally, reputation is an imperative factor that determines our intent to cooperate. (Loewenstein & Lerner, 2003)

Decision making as a topic related to behavioral economics or neuroeconomics could be operated under conditions of uncertainty. Various classical philosophers, finance specialists, economists, gamblers, and psychologists have sought various approaches to optimize their options and make reasonable decisions in the process of exercising judgements. While in the course of that quest, neuroeconomists and psychologists have realized that judgement and human choice are normally not founded on formal logic, mathematical, and statistical formula, but rather on general inference rules, known as heuristics. Therefore, some psychological pitfall of this research will look into the pitfalls prevalent when the need to exercise unaided holistic judgment under uncertainties arise. This would include, representative bias, availability bias, anchoring and adjusting bias, as well as overconfidence bias. (Rajkovic, n.d)

A few number of economists feel that the work of neuroeconomists stands threaten the standard economics, which is absolutely not so. Standard economics is rooted on the foundation of many excellent thinkers, including Morgenstern and Neumann, who established the four different axioms of the expected utility theory that is controversial these days. Standard economic stands on various assumptions of human behavior that were discovered from observing the outcome of the human decision-making process. Such outcome is usually available total economists, obtained from the government databases, and they demonstrate what the population has gone through in the previous months and years. (Constantinescu, n.d)

With a contrary opinion to general belief in most of the economic circles, neuroeconomics neither equates to the study of functional magnetic resonance imaging (fMRI) or psychology. Neuroeconomics depicts the scientific process of economics through which scholars from several disciplines cooperate and utilize methods for the generation of various scientific experiments that certainly prompt particular human or animal decision-making processes for the evaluation of the outcome in a managed or controlled environment. Finally, neuroeconomics is all about methods developed by neurologists, biologists, psychologists, anthropologists, physicists, mathematicians, and many other disciplines, including behavioral and experimental economists.

In spite of the pitfalls intended to be treated in this findings, it could be stressed that behavioral economics, otherwise known as neuroeconomist is not just meant to be a divided approach in the long run. Nonetheless, behavioral economics is just like a school of thought, which should lose special semantic status when it is widely used.

One of the major gains from economics is the tools used in neuroeconomics. This is similar to the standard demand and supply model in the basic economics class, as well as the benefits accrue to the average individual. Some theories may be proven wrong, while others may be proven to maintain a taller stand than ever.

This research paper will explore areas as identified in the content, in which the neuroeconomic process can make some relative contribution to economic theories. Also, neuroscientific methods deliver identification of neural substrate that support the high level cognitive and emotional process. Thereby, making it of greater advantage in the provision of direct tests of the existing and also the new economic theories.