Bohat ALA
Home Projects/Reports Negative Effects of Advertising on Children

Advertising can be related creation of awareness or calling public attention to a product, need or even a service. It is done via newspapers, television, radio and billboards. Advertising is normally used to increase consumption by customers (Chan 2010). In addition they can also be used to relay out education as well as provide notice. The main arguments of this paper are to try and refute the fact that advertising only has positive effects on children but rather negative ones.

Just to mention some of the merits of advertising; through advertising attention is created and this may lead to increase of fans. Based on children advertising tries to make a good environment for education and learning. It also positively affects on a person’s brain development and this is because it gives human lives inspirations as well as creativity. As much as advertising may have lots of positive sides it also has negatives sides largely on children unto which this paper will mainly dwell on (Barrie 2004). 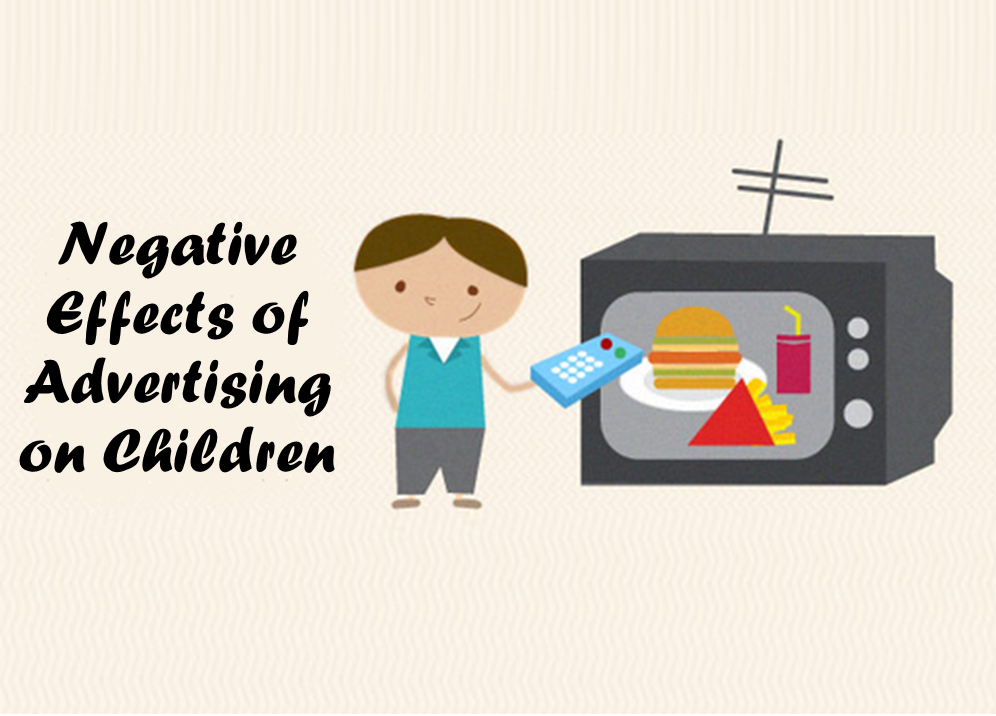 First and for most the main negative impact of advertising on children due to their impressionability. They usually believe in anything that reaches their senses. This compels them to reach out for whatever has been advertised. Advertisements here may involve food advertising, alcohol advertising among others. Based on food advertising children try to reach out for whatever food they have seen being advertised either on television or even billboards. In relation to that they tend to eat more and this can result to obesity. A case study here can be United States. Analysis shows that almost nine million children who are over six years of age are obese in this country.

In addition to the above (Kirsh 2010) adds that the frequent exposure of children to fast- food and snacks advertising on television and their positive attitudes towards the same normally lead to unhealthy eating habits. Resultant effect here can be obesity. For many producers the significant consumers are always children and therefore they become the main targets. Based on the case study that is America a child here is always exposed to almost 40,000 TV commercials every year. These commercials include fast-foods, cereals and even candy. High sugar and low fiber food are always advertised at the time when there are children’s TV programs. In relation to this there are very minimal advertising of vegetables, fruits and dairy foods in the advertisings. This increases children’s consumption to these products.

Last but not least on food advertising attention is largely needed on parental characteristics. It is because they are the major caregivers. This involves parental styles of communication while watching TV with their children. They should try to change the attitudes of their children on obesity level and TV fast-foods and snacks advertising. Communication here involves verbal interactions with children among other forms of communication. Thus one of the mitigation measures to be undertaken is based on parental responsibilities. They should be able to educate their children on TV advertisement and obesity (Pardun 2014).

Another TV advertisement which has negative impacts on children is advertising alcohol. Children and teenagers are always exposed to alcohol advertisement on TV in early lives. Little is known on how they always interpret whatever they see in those advertisements. One most largely affected area is the pre adolescents. This changes their ideologies and beliefs on alcohol. Research shows that effectiveness of an advertisement is increased by it likeability (Barrie 2004). And nonetheless a little has been done in areas of researching alcohol advertising. In a case study of UK, advertising of alcohol is always displayed in the early evening television programs. Thus result is incidental exposure to teenagers because at this time they are home.

Some other studies point out that whatever a child gets at early age becomes the base of his life. Furthermore there has been a little done on how children react to TV advertising. Since alcohol advertising is always persuasive children and teenagers try to reach out to them at any cost. As a result children tend to develop representations which are explicit in nature. Some of the findings are that as the age increases appreciation of alcohol also increases. In relation to this a 12 years old child is far more enthusiastic than a 10 year old child. These alcohol advertisements tend to interfere with children’s perceptions and differential effect on gender (Pardun 2014).

Furthermore advertising alcohol such has beer has made children and adults to perceive them as being related to male. The researches which have been done relied only upon the explicit knowledge based on focus groups and interviews. In matters related to developmental issues different ideas and responses can be achieved if the methodology used in groups and interviews are changed. Since different ways of advertisements are used to persuade the customer leading to the liking by children, the interpretation of the same should also be different to enhance the child’s perceptions positively (Kirsh 2010).

Moreover based on (Chan 2010) advertising can also impact on children negatively in that it always confuses the relationship between need and wants. It therefore tends to lower someone’s self esteem most commonly children. This is because if they do not get whatever they seek for from the advertising they tend to feel low and rather poor as compared to other who can access them. On the other hand parents tend to spend more money on their children as compared to the time. Since children are not able to tell the difference between TV programming and advertisement they are normally bombarded by the stimulation and this blurs their perceptions. When relaying out advertisement, the companies tries to ensure that they give the child a reason to nag their parents to buy them the products. Some of these products are very harmful to a child such as video games. This process of making children as main targets in advertising tends to form schisms in relationship between parent and child (Pardun 2014).

In review of this literature therefore advertising reveals threat to children. The methods presented to the public are always not realistic. Since the companies know that more than half of children love cartoons and animatronics they tend to use these to promote their brands like beer. Advertising companies want people to believe that the kind of life they present on screen is the one a person should live. This literature tries to sum up some of the issues on the negativity of advertisement on children. And with increase in methods and products of advertising due to competition for markets our children are greatly exposed to dangers. And since children are also inseparable with TV programs the effect, the mitigations measure become difficult.