The term “nanoparticle” is not usually applied to individual molecules; it usually refers to inorganic materials. Nanoparticles are particles between 1 and 100 nanometers (nm) in size. In nanotechnology, a particle is defined as:

A small object that behaves as a whole unit with respect. In 2008 the International Organization for Standardization (ISO) defined a nanoparticle as a discrete nano-object where all three Cartesian dimensions are less than 100 nm. The ISO standard similarly defined two-dimensional nano-objects (i.e., nanodiscs and nanoplates) and one-dimensional nano-objects (i.e., nanofibres and nanotubes). But in 2011 the Commission of the European Union to its transport and properties.

Selenium is a chemical element with atomic number 34, chemical symbol Se, and an atomic mass of 78.96. It is a nonmetal, whose properties are intermediate between those of adjacent halogen elements sulfur and tellurium. It rarely occurs in its elemental state in nature, but instead is obtained as a side-product in the refining of other elements. Selenium salts are toxic in large amounts, but trace amounts are necessary for cellular function in many organisms. The most stable allotrope of selenium is a dense purplish-gray solid. Elemental selenium produced in chemical reactions invariably appears as the amorphous red form: an insoluble, brick-red powder. When this form is rapidly melted, it forms the black, vitreous form, which is usually sold industrially as beads.

Selenium occurs naturally in a number of inorganic forms, including selenide-, selenate-, and selenite-containing minerals. In living systems, selenium is found in the amino acids selenomethionine, selenocysteine, and methylselenocysteine. In these compounds, selenium plays a role analogous to that of sulfur. Another naturally occurring organ selenium compounds is diethyl selenide. Certain solids are selenium-rich, and selenium can be bioconcentrated by certain plants. In soils, selenium most often occurs in soluble forms such as selenate (analogous to sulfate), which are leached into rivers very easily by runoff.

Nano metal particles such as silver and gold have drawn the attention of scientists because of their extensive application to new technologies in chemistry, electronics, medicine, and biotechnology. Selenium is also important in this respect. In medicine, selenium nanoparticles have been reported to demonstrate high biological activity and low toxicity. The structural properties of SeNP are determined and characterized by studying parameters like size, shape, etc.For analyzing the structural properties, the following meth-ods are employed: UV-visible absorption spectral analysis X-ray diffraction analysis (XRD), Fourier transform res-onance spectroscopy (FTIR) analysis, dynamic light scat-tering (DLS) analysis, transmission and scanning electron microscopy.

The production of metal nanoparticles can be achieved through various chemical and biological methods. Carbon disulphide can partially dissolve metal selenium and enable extraction of this element from bacterial cells or polluted soil and sediments. The properties of precipitated selenium particles have mainly been investigated by transmission electron microscopic methods after a solvent extraction process (i.e., by carbon disulphide) or after ultrasonic cell disruption. However, the synthesis of nanoparticles using microorganisms and plant extracts has been suggested as a possible green alternative to chemical and physical methods. 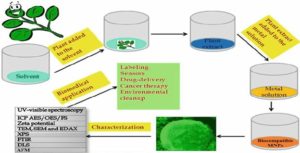 Synthesis of Nano particle from Plant

It has long been known that plants are able to reduce metal ions both on their surface and in various torgans and tissues remote from the ion penetration site. In this regard, plants (especially those which have very strong metal ion hyper accumulating and reductive capacity) have been used for extracting precious metals from land which would be economically unjustifiable to mine; an approach known as phytomining. The metals accumulated by the plants can be recovered after harvesting via sintering and smelting methods. Interestingly, study of the metal bioaccumulation process in plants has revealed that metals are usually deposited in the form of nanoparticles. For example, Brassica juncea (mustard greens) and Medicago sativa (alfalfa) accumulate 50 nm silver nanoparticles to a high level (13.6% of their own weight) when grown on silver nitrate as a substrate. In addition, gold icosahedra of 4 nm in size were detected in M. sativa, and semi-spherical copper particles with a size of 2 nm were observed in Iris pseudacorus (yellow iris) grown on substrates containing salts of the respective metals. Whole plants can obviously be used to produce metal nanoparticles. However, there exist certain limitations that should be taken into account upon industrial application of this technology. Firstly, the size and shape of nanoparticles vary depending on their localization in the plant, which may depend on differences in the content of metal ions in various tissues and the subsequent possibility of nanoparticle movement and penetration. These factors could influence the level of metal deposition around already existing nanoparticles, and also the prospects of new nucleation events (initiation of nanoparticle formation).

Plants mainly contain selenium (Se) covalently bound in a number of different chemical forms which is mainly responsible for its biological activity. Further, several enzymes contain selenium in the form of the unusual selenocysteine amino acid which act on free radicals. Broccoli has the ability to accumulate Se many-fold beyond the concentration of Se present in the soil. Reflecting on the above it can be suggested that development of methods to increase the natural accumulation of Se in broccoli may greatly enhance its health-promoting properties.

Green synthesis is a biological procedure which can be achieved can be achieved by using plant extracts. This method is capable of producing SeNPs in a size range of about 50-150 nm, under ambient conditions. It was found that SeNPs are able to inhibit the cell growth by dose-dependent manner. In addition, combination of SeNPs and doxorubicin shows better anticancer effect than individual treatments. The present review also brings to light about the causes and implications of toxic effects posed by Se nanoparticles as well as applications of Se nanoparticles in medicine.