Home > Projects/Reports > Mountaintop Removal in Appalachia, US as an Environmental Problem

Mountaintop Removal in Appalachia, US as an Environmental Problem

Mountaintop removal is described as any technique of surface coal mining destroying a ridgeline or mountaintop, 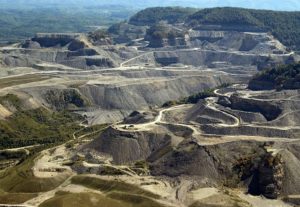 whether the mined area is returned or not to something that can be legally referred to as “approximate original contour.” (“appvoices, 2013”) In the same way, it refers to a mining practice in which the tops of mountains are removed and revealing the seams of coal. The remains obtained from the top of these mountains are dumped in valleys that are close by. (“Ilovemountains”) The major America’s dirtiest source of energy is coal, and it has been considered as the country’s leading source that produces global warming pollution. The pollution that comes from coal plants emit acid rain, dirty air, as well as contaminated water and land. The components of mountaintop removal process include clearing, blasting, digging, dumping waste, processing, and reclamation.

Electricity is an important aspect of an economy and coal play an important role in its generation. Although its uses in the United States have been gradually declining, but it’s still heavily the major source of power to some cities in the United States. The major source of coal is from the removal of mountain tops. Coal industries dominate the economic and political areas of Appalachian communities, and this had been existing for more than a century. Due to the high removal of mountaintop to extract these coals, the Appalachian communities are transformed into a region that is globally significant natural diversity into a totally increasingly polluted area and degraded landscapes in which perceptive economic possibilities are relatively few. (Fabricant, 2015) An important aspect of this method of power generation is the fact that it requires a minimal involvement of workers and can conveniently generate power supply to many regions and part of the country.

It is a well known fact that the removal of mountaintop to extract coal for the generation of power supply is a good approach to affecting the economy positively, but the processes involved impose a great and negative impact on the environment. Thus, leading to a high level of environmental pollution. The processes involved include bombing mountains, dismantling the mountains, devouring the earth, filling the valleys, processing black gold, storing sludge, exporting the riches, fouling the skies, and dumping the ash. These processes are the major causes of environmental pollution in the Appalachian communities.

Companies specialized in coal raze a whole mountainside, rending trees from the grounds, and also clearing brush with the use of earth equipment such as huge tractors. The remains are then burned as deep holes are usually dug for explosives. After this process, explosives are poured into the deep holes and hence, the mountaintops are intensively blown apart. The use of huge machines such as draglines are employed, which are capable of pushing the dirt and rock into a close stream and valleys, burying waterways forever and destroying the community water.(“earthjustice, 2015”)

The Adverse Effects of Mountaintop Removal

Mountaintop removal is a great threat to the environment. According to a study by Austin 2011, the methods of obtaining coal from mountaintop leads to a myriad of ecological and social problems, especially in Appalachia. These effects are detrimental to the human health and the environment in general. Some of the other effects include flooding, blasting, and sludge dam. The waters in these communities are affected because the movement of these remains causes a higher level of selenium and sulfate in the water which kills most of their aquatic. Also, the forests are affected, when the mountaintops are removed, the forests are destroyed, and since the top soil and upper portions are removed by these processes, the remaining soil finds it difficult to produce native hardwood forest. The birds and fish are affected, because birds require the forests to live in, while the fishes require water to survive. Additionally, when rocks are blasted, flyrocks injures, or even kills.

The processes in solving these issues involve the provision of a way to create a loophole in order for coal companies to dump mining waste, and stop dumping the mining waste on the waterways through agencies set up to restrict these acts. The Appalachian communities are basically concerned with having clean water, so they have advocated for it and a Clean Water Act was set up to help this issue and educate the nation on the threats it is posing. Lastly, they have also agitated that the process is stopped immediately by agencies under the Obama administration (Perks)

Putting a stop to the source of a nation’s wealth may not be feasible, but having a solution to save the lives of the people living in that community should be of great importance. One of the solutions to this is that, the people living very close to some of these mountains can be migrated to better part of the states, and those who are scarcely distant from the mountains can be massively provided with perfect water system and there must be extra importation of forest related needs to satisfy their needs at a very affordable cost.