The most appropriate information system strategy that the Midchester University should adopt is the plan B. This is where the existing structures are maintained but radically changing their processes, as would be enabled through IT. Committees overseeing, for example, academic quality and research strategy would become joint faculty committees with an equal representation of members from each faculty. In a similar manner, heads of department from both faculties would meet together on a regular basis. Communications and report structures would become more collaborative, involving joint reports on key strategic partnerships.

Heads of department from both faculties would meet together on a regular basis. Communications and report structures would become more collaborative, involving joint reports on key strategic partnerships. The cost savings of a single faculty office would not be achieved, but estimates suggested that the joint working proposed would be less costly than Plan A. Students and staff would experience no disruption under the new arrangements, although again potential developments in terms of new courses and research were envisaged. One potential hurdle was the increased levels of bureaucracy. Staff already moaned about the amount of paperwork and there was a danger of increasing the number of committees under the joint arrangements.

The key features looked into in this strategy are;

The strengths, weaknesses, opportunities and threats identified for the Midchester University were provides a wide environment and covers the elements such as support systems for information technology, academic programs and the IT infrastructure. All the items in the four categories are identified and ranked as follows: 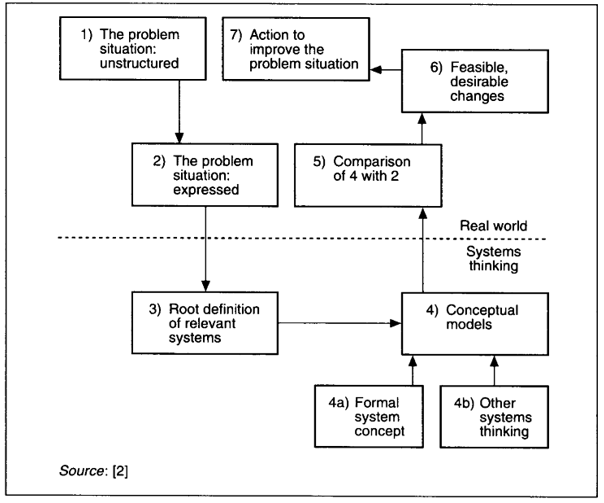 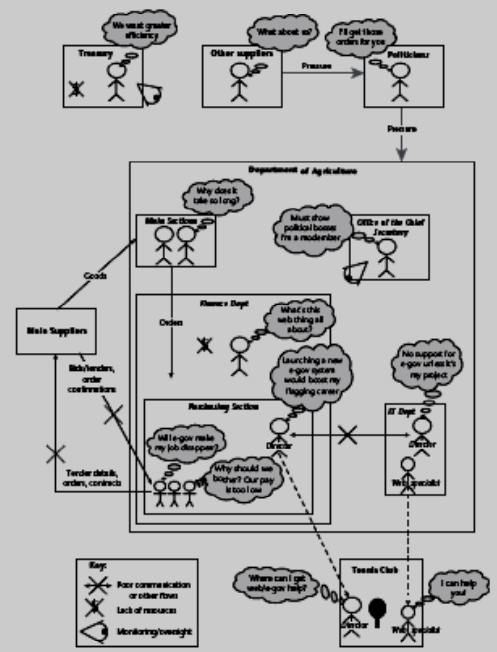 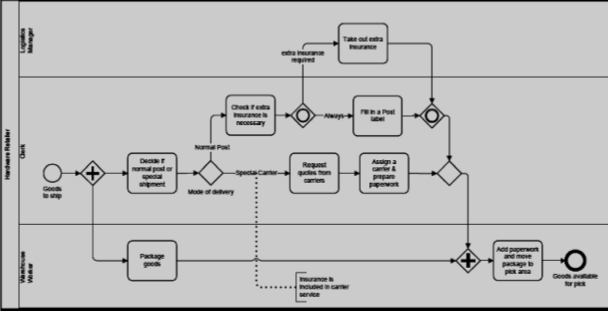 Soft system methodology is a software technique used to structure and support complex information system.  It is a crucial process used to manage the information system implementation. A soft system methodology specialists take the SSM to be a thinking-out process which apply organized action in reacting to possible changes that tend to affect the IS strategy process.

Both Wilson and Checkland take SSM as a continuous process. The process is applied in every stage. For example, when the organization needs to make a change in a department, there are new problems or issues that need to be attended. This problem needs an investigation and a debate so that you come up with the most suitable solution. Both also take soft system methodology to be the basis of designing the system in every field. Different factors such as cultural, economical or political (Kurtz, 2011).

Both also consider soft system methodology was created to respond to the fact that most system problems are significantly complicated. It is wrong to assume that any problem realized can be solved successfully.

The difference between Wilson SSM approach and Checkland approach is explained in three groups.

These are assumptions, process, and the language and concept. While Wilson’s approach takes the traditional method taken by other researchers, Checklands gives a totally new and different dimension of achieving the 7 stages of SSM. The approach taken by Checkland is very radical and it starts with the arrangement and organization premise.  The process is made open so that the development team interact freely with the environment. The human activity is included in the process of modelling. A particular dimension of the system is taken and integrated with objective and subjective impression to come up with reach picture. The people involved are also included so that their views are integrated in the development process (Hoye, 2010).

The rationale that this approach takes includes

A human activity system is a combination of resources and people organized into a complete package to do something. It is the presence and the contribution that affects the people in the system. The individuals in the system choose and perform tasks, as an individual or as a group, which enables them to achieve a wholly specified purpose. On the other hand, natural system does not involve a lot of resources; the system is build using the traditional methods. This system is always integrating the traditional hazards of risk management and natural science.

Lastly, the insight of the system originates from the implementation of purpose filling and purpose seeking dynamics in relation to the humans as system and the related environment. Conversely, the natural system takes a normal process of system development. The system stands as an independent entity. 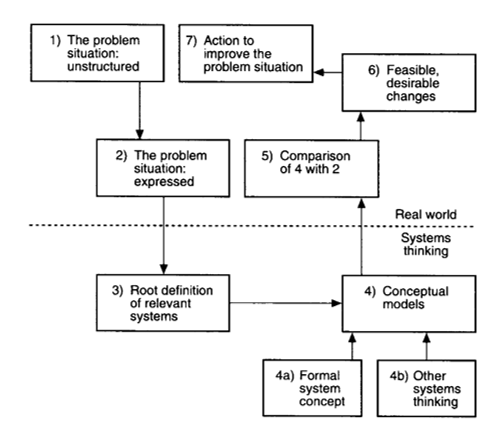 Soft system approach refers to a methodology where organized human activity is studied with a view of meeting a specific objective or objectives.A system in this case may refer to the human activities which may be interrelated. It allows an analyst  to structure his or her thinking about the real world by way of using system rules and principles. It entails an individual undertaking a situation in the real world then study the situation in a manner that is unstructured thereafter models for the situation under consideration is developed. A good illustrative example evaluators who can deduce vital facts from programs with many goals with various precise perspectives from the objectives that ensures comparison with the real life situation(Kees van Haperen, 2002).

Checkland soft system methodology approach entails seven stages where the initial step is pretty much in the real world where one explores and outlines a situation which is meant to solve a problem. One has to find out or come up with a reason as why he would wish to explore a situation. After an elaborative idea as what needs to be achieved objectively the second stage entails development of a rich picture with emphasis on the, conflicts and issues expressed by people not forgetting structures, climate  and processes  evaluated so as to depicts a clear picture of what is being expressed. The third stage entails the transformation of the real world to the actual system also known as root definition stage. This where one tries to comprehend different perspective concepts so as to be able to draw a rich picture. Situations in this case can be evaluated using holons so as to come with a clear picture of the real world descriptively (Wilson, 2000).Holons need to be addressed separately so as to gain clarity which ensures implications of each holon is well understood with a view of integrating them together so as to come with concrete conclusions and suggestions that will determine future actions. A particular perspective can be put into a model that will ensure transformational benefits, facilitators of the transformation from beginning to the end with meaningful emphasis person(s) to whom the system is answerable together with the surrounding that does not control the system known as CATWOE(Kees van Haperen, 2002).

When the CATWOE model has been explicitly developed according to Checkland then a conceptual model can be drawn. The conceptual model ensures the usage of imperative verbs with activities that are selective being done at once. Dependencies are also indicated in a manner that prevents overlapping of arrows through rearrangement (Patching, 2003). The fifth step entails the reality comparison together with insights from what is compared with a view of enhancing ideas. Desirable and feasible interventions are then developed as the sixth stage of this development .The methodological approach then comes to full cycle with a principle objective of improving the situation as the seventh step.

Wilson soft system methodology approach  emphasises on the difference between processes that are intellectual and reality through an approach that is iterative where a concept that is most useful  for further exploration for example the structure design of the organisation as compared to the seven methodological approach  used by Checkland.

The similarities between Checkland and Wilson in using soft systems methodology approach is the use of the CATWOE analysis as root definitionmodel.Another similarity of the two methodology is the is the development and understandability of the different perspective concepts (Frank Gregory, 2003)

Human activity system refers to people and resources assembled together with an aim of accomplishing a given purpose. The system affects the people and also in similar fashion the system is affected by the people ‘sparticipation. Activities are selected and carried out individually and communally by the people and this enables them achieve aparticular objective together where asset of relations is maintained and sustained over a given period of time. The system interacts and is open to the environment to whom it contributes and depends on hence fostering a mutual interdependence kind of relationship though constraints and expectations brought about by the interdependence  affects both the system and environment which provides support and resources required by the system while natural system refers to paticipants who collectively share a common interest and engage in activities collectively for system survival (BooksDavies  and Ledington, 2010).