Late Adulthood And The Death

Late Adulthood And The Death

In everyone’s life, one thing is a must incident to happen, and that is death because it is inevitable. And if people will grow older in their lifespan, then one other thing that they must have to face is late adulthood, when they will be considered aged. It is important to understand for individuals that if they want to know about their late adulthood that how it will look like, then they must prepare it through other stages of development related with their life span. The final years of one’s life will be dependent on the pattern, which was set during the early stages of life. Ideally, it is important that one spends his/her late adulthood with his/her family, friends, grand children etc. It is also critical to have a sense of good health with good mental as well as physical condition so that entire period of late adulthood goes well (Gow, Pattie, & Deary, 2017)

It is necessary to keep in mind that quality of late adulthood will be relied upon the life, which was lived earlier. It means that how an individual lived his/her previous lie stages, and what lifestyle as well as behavior was chosen. The essence of being active in society is very crucial for an individual during this life period as it would keep them energetic, and keep them away from the bad effects of loneliness. The role in the family is also a crucial one in this stage as younger ones look at you for the guidance and love, which they deserve from their older ones. This age period can be less stressed with above mentioned aspects. One more thing is to use life assisted with the help of technology so that a person can achieve a sense of satisfaction and fulfillment in this late adulthood stage. 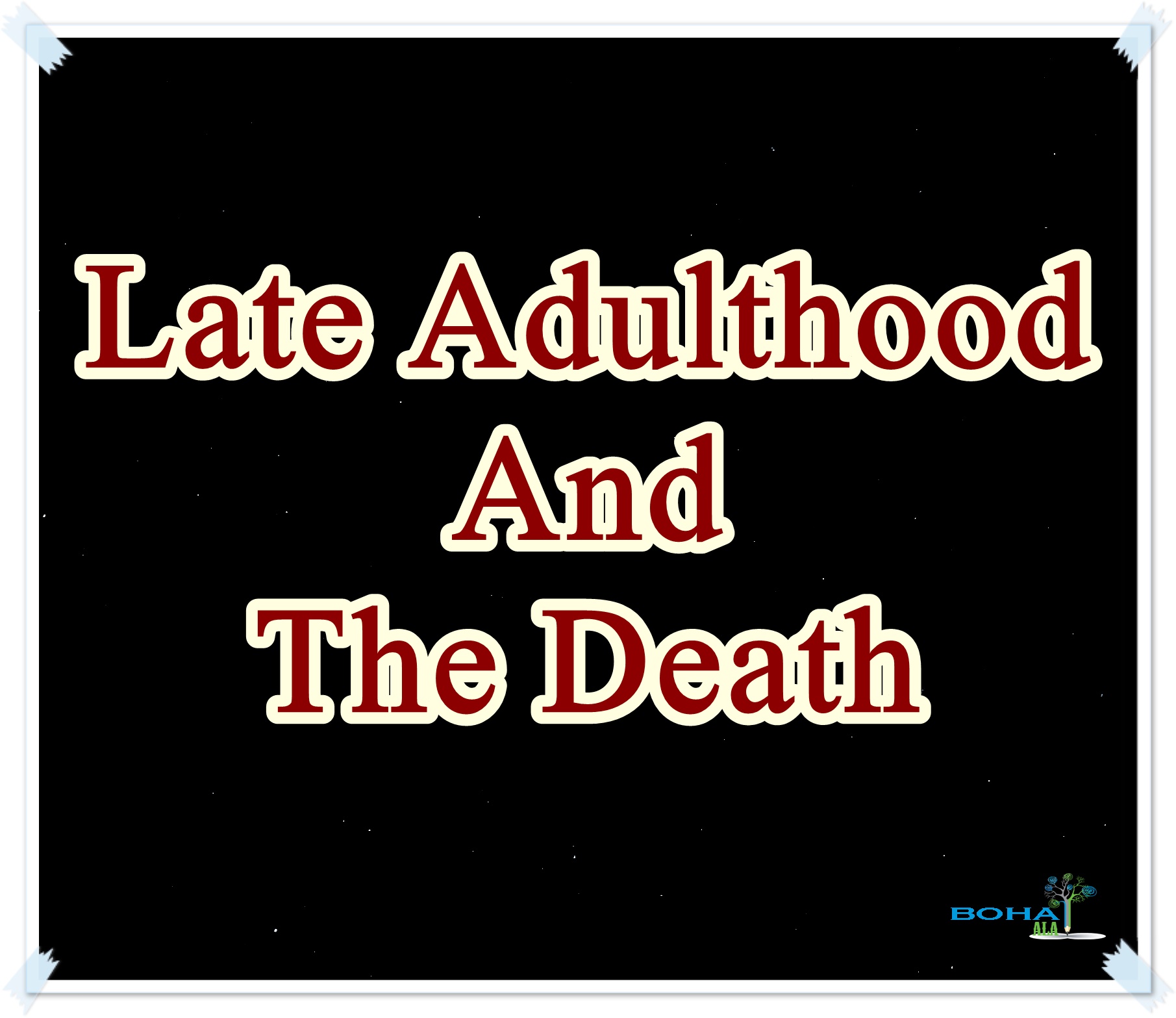 It is a fact that everyone has to admit that people do have some kind of stereotypes regarding later stages of life like late adulthood. The old age people have to deal with these stereotypes, which are very strong in almost every society. It is true that later stages of life will bring some significant physical and mental changes for the person, but the other issue is change of attitude towards them due to some kind of stereotypes that people strongly have in their minds. Ageism do not comes with some changes in one person’s live in terms of health or physical structure, but it comes with challenges of ageism stereotypes. The major issue is that most of these stereotypes are negative in nature, which puts old age people in spot of bother without any particular reasons (Raina & Balodi, 2014)

Ageism is not a healthy concept by any means for the old age people as they are linked with so many negative things in this concept. Like people in late adulthood may be deemed weaker and sometimes, some jokes maybe thrown on them for their age and weaknesses or their ineptitude. It is true that people lose some skills, abilities as well as mental and physical strength in this age, but it does not mean that they should be discriminated on this basis. The society can’t show discrimination and bias approach towards old age people, just because they belong to a certain age group. Dementia is a concept, which believes that old age people do lose cognitive functioning such as losing their memory, lack of problem solving as well as decision making skills. But in reality, the percentage of people having dementia is not that significant, which is actually though by the stereotype thinking.

The late adulthood comes with so many health and wellness issues which are actually linked with mental and physical health. The ability of old age people are limited and they are not able to do lots of things, which they have done in their younger age. Moreover, as mentioned above that old age people also face the stereotypes of ageism, which also discourage them to do well in later stages of their lives. But the important thing to keep in mind is that every individual is essential part of a healthy society, so old age people cannot be left alone to reach to their death stage, rather they should be included in the mainstream, and kept encouraged by promoting health and wellness for them

It is crucial for society that they understand the responsibility and start some program, which promotes health and wellness for the old age people. People in their late adulthood need some guide and help so that they can remain healthy, fit and active, and do play their positive role in the society. The physical as well as mental fitness level of old age adults should be encouraged by engaging them in healthy fitness activities. The role of government is crucial in this regard as they must develop some programs to promote mental and physical health activities for old age people to regain their health. The late adulthood needs lots of healthcare, which should be ensured by the government, NGOs and society. The family should take care of older individuals, and give them sense of care, which they need. They must be provided a social support system, which allows them to mitigate all those negative effects, which comes with the aging (NARUSHIMA, LIU, & DIESTELKAMP, 2018)

Overall, the importance of relationships as well as social interactions is crucial in every development stage of life throughout the lifespan, but when people near to end of their lives, and when they are on the verge of their death stage; the importance for these social interactions and relationships becomes even more crucial for so many reasons. When an individual is nearing his death, and living a life in late adulthood, he/she needs more care, more love and more social activity so that he/she can keep his self away from any worries and stress, which can come with the thought of dying. Such individuals should not be left alone to die in this moment with the sense of loneliness and stress, rather they should be engaged in social relationship, and kept in the limelight with the help of family and friends. The role of family is very critical in this regard as family members should understand that what an individual needs, when he/she is nearing his/her death. They know that what a person has gone through in his/her life, and how they can give comfort and satisfaction by doing certain things. Such attitude will help them to remain relax and enjoy their last moments of life as much as possible (Luong, Charles, & Fingerman, 201)

Cultural And Personal Attitudes About Death And Dignity In Late Adulthood

It can be said that dignity for the dying person in the late adulthood is probably one of the most crucial things in his/her life. It is certainly important that what cultural as well as personal attitudes have been throughout the lifespan, but it is also crucial to understand that what these attitudes will be regarding death and dignity. There can be people who have negative personal attitude towards death and the elderly people. However, it is essential to maintain a level of dignity for a person, who is dying. A man or woman should be treated with positive attitude so that they can die with dignity that their life was fulfilled. There are various religions and cultures which have their own beliefs regarding the death, but there is one common attitude towards dying person; the sense of dignity, which is kept alive. However, personal attitudes towards death can differ for different individuals. But it should be somehow ensured that dying person is given dignity and respect while he/she is dying in late adulthood (McDonald, 2004).