Eastman Kodak was started in 1880 by a high school dropout when George Eastman invented a dry-plate process in a company at Rochester, New York, which was then used in production of dry photographic plates. Since 1892 when Eastman decided to name the Eastman Dry Plate Company as Eastman Kodak, the company has emerged to become a worldwide renowned company ranked as a premier multinational company. In addition, Eastman Kodak has been ranked amongst the 25 largest companies not only in the USA but throughout the world. With invention of Brownie and introduction of a paper rolling film in 1884, Eastman Kodak spurred to higher heights in the photographic industry (Charlene, 2008). Despite the death of George Eastman in 1932, George Fisher followed the footsteps of his predecessor thus making the firm what it is today.

The following is a case analysis of Eastman Kodak with emphasis on its industry, Photographic and Optical Equipment/Supplies. This analysis is on the prevailing competition, strategic characteristics, and various alternatives the corporation can take in order to continue being a leader in the industry. From the various alternatives presented in this case analysis, some recommendations are made, which are likely to spur the corporation into even higher levels that it is experiencing in the current 21st century.

Analysis of Industry and Competitors

Photographic and Optical Equipment/Supplies Industry’s products are broadly categorized into five including equipments for taking still picture; motion picture equipment; chemicals for preparing photos; films, paper, plates, and cloths for sensitized photos; and equipment for photocopying and microfilming. Innovative technology has played a great role in enhancing the success of photographic equipments’ markets. For instance, with the new development of digital cameras and the One Time Use (OTU) cameras that are disposable, the market has significantly increased commanding huge number of sales as well as new entrants of firms to meet the growing demand (Congressional Budget Office). Amazingly, digital cameras outsold the traditional cameras in 2003 indicating the role of innovative technology in the industry as well as the markets. Exhibit 1 indicates a growth of 1.5% of the market as compared to previous years (Bureau of Economic Analysis n.d.). In addition, this exhibit indicates total revenue of approximately $ 20,726.90 million with a total of $ 11,057.80 million industry’s gross product coming from about 1,931 establishments and 2,124 enterprises. This indicates that the market is rapidly growing having approximately 86 firms.

Within this growing industry and its market there are about 86 companies that have contributed to such positive result. Consequently with the 86 firms in the industry competition has immensely grown leading to quality products through innovative technology that has seen development of digital cameras (Eastman Kodak, 2009). However, the main competitors to Eastman Kodak Company include Canon, Fujifilm, Hewlett-Packard, Ricoh, Sony, Xerox, Nikon, Olympus, Lexmark, and Seiko Epson Corporations amongst others. Exhibit 2 provides a brief overview of these corporations and how they are offering significant competition to Eastman Kodak within the industry. Exhibit 3 provides financial performance of five companies in Photographic and Optical Equipment/Supplies Industry, Kodak and four other main competitors. In Exhibit 3, ROA (Return on Assets) and RIC (Return on Invested Capital) are provided that give indication of a bad performance by Kodak in the latest years where the corporation has had negative values. In addition, Exhibit 4 shows the performance of Eastman Kodak by segments.

Innovative technology is the most emerging driver of this sector. The majority of goods developed by Eastman Kodak and other companies in this field are essentially influenced by innovative technologies (Consumers Union of U.S, 2009). This is why it was necessary to rock the industry with the advent of digital cameras, thereby commanding a larger share than that of conventional cameras. Therefore, most firms in this industry have been able to reach out the market through advancements of technology. Imaging and photographic has taken a different direction especially in the 21st century hence the need for creativity and innovativeness.

Exhibit 14 (a) shows the opportunities that Eastman Kodak enjoys against its competitors. Amongst the opportunities enjoyed include financial markets where it is possible for the corporation to raise money through debts owing to its large assets, emerging markets especially with regards to different age groups being so much involved in taking photographs, innovation especially with developing technology, online selling and buying of products, and also product services expansions. From Exhibit 4 the main segment that provides a good opportunity for Eastman Kodak is the consumer imaging. Compared to other segments, Consumer Imaging Segment attracted a lot of revenue in terms of sale during the fiscal year 2010 (Dobbin, 2009). Within Consumer Imaging Segment the main areas that portray good trading grounds for Eastman Kodak are interchangeable lens camera and lenses for ILC. This is because over the last fiscal year they recorded the highest level of growth with interchangeable lens camera recording up to 30.0% and approximately 34% respectively as shown in Exhibit 5 (FactSet Research Systems, 2009). Another opportunity is with regards to the power of supplies.

According to Exhibit 14 (b), Eastman Kodak suffers significantly from high levels of competition, cheap technology, economic recession, lower cost for competitors or imports, maturing categories, products and services, as well as price wars and product distribution. These have posed great threats to the firm leading to bad performances it has achieved within the last few years. Competition has been due to the high power of entrants as well as intensity of rivalry and substitutes. This poses a great threat to Kodak as there will be more firms entering the industry. As a result the poor record seen within the previous years is likely to be repeated. It is therefore obvious that with such increase in new firms and substitutes there is likely to be split within the market share hence affecting Eastman Kodak significantly. There is therefore serious need to have proper, efficient, and effective measures that should be put in place in order to retain the already existing customers (Dobbin, 2009).

Other than opportunities and threats discussed above, Eastman Kodak enjoys many strengths coupled with some weaknesses. Some of the strengths include meaningful brand recognition especially given that it has been in the market for over a century, diversified geographic base after establishment of various subsidiaries and enterprises, and cross licensing agreement. Its weaknesses include lack of product and weak financial performance. Lack of product arises when Eastman Kodak produces products hurriedly after its competitors have produced. This makes the company’s products similar to those of the competitors hence there is no striking feature differentiating it from other products hence creating that uniqueness that is required by most consumers. In addition, quality is compromised in the process of hurriedly manufacturing and developing products on the basis of other products.

Market Positioning: Kodak has targeted consumers who are adult and post baccalaureate of about 25 to 40 years of age, actively involved in various activities, having so much passion about relationships and friendships, and with a lot of interest in capturing images both still and motional. This market segment is very rich as majority of people between the ages of 25 and 40 are far much active in taking images and sharing the same through various digital devices. In addition, its market position has focused on the marketing philosophy that states “Kodak is preferred by adults who are active, busy and care about meaningful relationships and want to encapsulate and share important moments in their lives, because Kodak’s products enable them to capture, share, display, and store pictures and create keepsakes, with more ease than competitors like Canon, Nikon, and Fujifilm”.

Products: Eastman Kodak’s main products are within the four segments as portrayed in Exhibit 4. Nevertheless, Kodak as a firm has failed to provide products that distinguish benefits to consumers. Most of its products are produced in haste as a result of pressure from competitors and this leads to poor quality products. Consequently the firm suffers reduction in the market share hence profitability as indicated in the financial statements from Exhibits 7 to 10; income statements, balance sheet, cash flow statement, and ratio analysis respectively. A lot of risks thereby face products manufactured in this kind of manner. For instance, there is a possibility that such products may have some defects in them and this discourages consumers from purchasing the same.

Pricing: Applying the economic value pricing indicated in Exhibit 11, Kodak has been able to price most of its products. In this case, Kodak struggles to deliver products while that provides a demand for price premium over its competitors. For instance, most of the cameras offered by Kodak range between $ 80 and $ 160 while its competitors sell the same models of cameras for a record price of between $ 110 and $ 500 (Kavajecz, 2009). Kodak enjoys the benefit of four of its products being ranked amongst the top nine cameras that are doing very well in the market. Exhibit 12 provides comparison of pricing by Eastman Kodak Corporation.

Placement: Kodak placement is almost similar to that of its competitors. There are products that are sold through the website while others are distributed to consumers through various distributional channels available in the industry. Most of the products sold directly by Eastman Kodak through its websites are digital cameras, inkjet printers, and digital picture frames owing to the fact that they are very sensitive.

The key strategic issue with regards to Eastman Kodak Company is the fact that they manufacture products hurriedly after their competitors. This is due to lack of proper innovative and inventive strategies. Consequently Eastman Kodak Company should have more people brought on board to work on innovative and inventive technology, which will help in creating unique products of high quality.

There are various alternatives that Eastman Kodak can employ in order to attract more customers and retain existing ones thereby achieving higher profits. Some of those strategies include;

In conclusion, looking at all the above alternatives they are all viable even though some are costly in terms of expenses hence are likely to cause an increase in costs of sales. The best alternative amongst the aforementioned ones therefore is for Eastman Kodak Company to engage in research and development that will improve their inventive and innovative technology for the purposes of developing products that are unique and of high quality.

Exhibit 3: Performance of Eastman Kodak in Comparison to Competitors

Exhibit 5: Forecasting for 2011 for Eastman Kodak 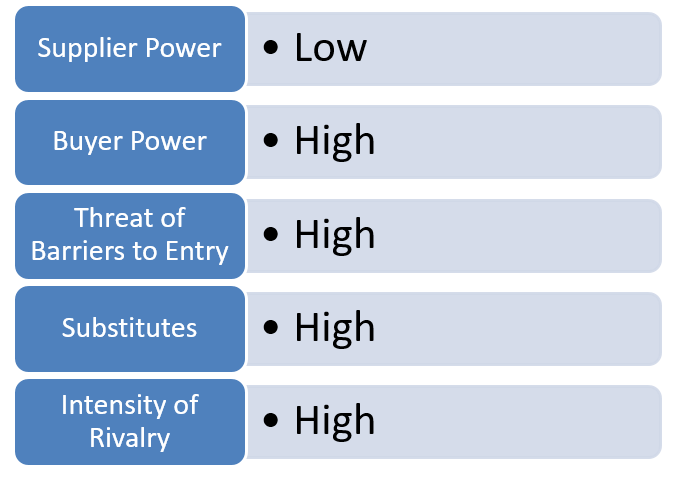 Exhibit 14 (a): Analysis of Opportunities and Threats 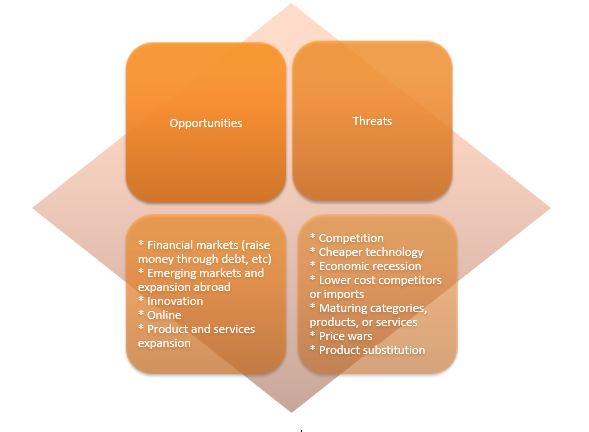 Exhibit 14 (b): Analysis of Strengths and Weaknesses 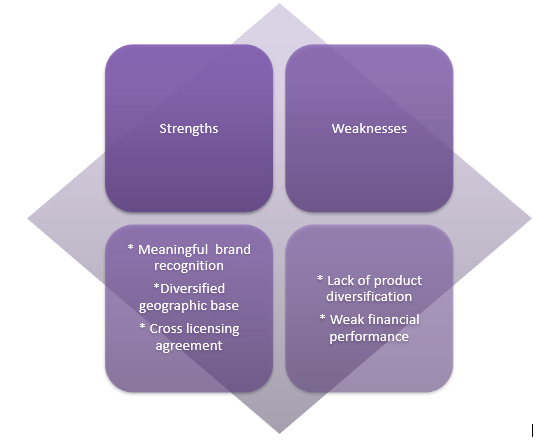 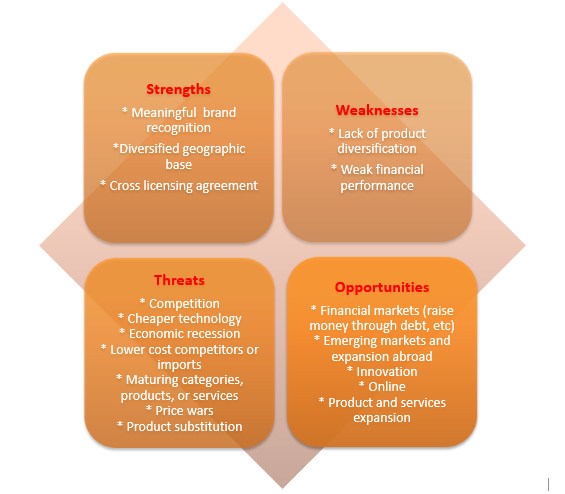