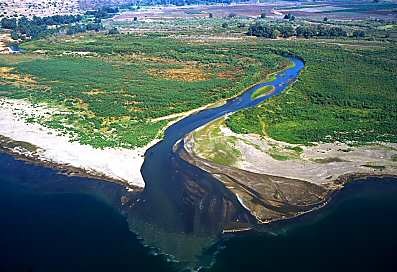 watershed that might be harnessed to bring constant cooperation in designing and project execution between conflicting riparians, hence resulting to harmony in the region. Therefore, this paper starts with a thorough description of the watershed background and the way human interface has transformed its hydrography. Sequentially, is a widespread history of water struggle and collaboration in the watershed, starting with the agricultural background through to the hydro political complexities of the twentieth century.

The core of the study trails, with integrated proposal model for analyzing water basin and conflict resolution. Furthermore, this extremely appropriate and perceptive study involving water and politics across Middle East ought to be crucial to scholars, planners for water resource, and decision makers worried about the Middle East Water condition, in addition, it will be of interest to those working in line with roughly 200 global watersheds.

Notably, the Jordan River lies on the boundary of three countries, including; Lebanon, Israel, and Syria, in a hilly region. Descriptively, three springs join to form the northern Jordan headwaters (1) the River Hasbani, rising in southern Lebanon having an average 125 million cubic meters yearly (2) River Dan, in Israel with an average of  250 cubic meters a year (and 3) the River Banais from the Golan Heights, with an average approximating to 125 cubic meters annually. Expressly, these streams meet six kilometers in Israel and move southwards to the Galilee Sea, entirely in Israel. Just ten kilometers underneath the Galilee Sea, River Yarmuk joins the Jordan, and contributes an average of 400 cubic meters annually to the flow of River Jordan (Davis & Burke, 2011).

Historically, previous conflict regarding the Jordan River Basin comprises controversies and a war. Earlier in 1951, countries commenced unilateral strategies for the water distribution. Firstly, Jordan publicized an irrigation proposal that involve tapping the Yarmuk River. Secondly, Israel sealed the gates of concerning a dam to the south Galilee Sea and commenced the draining of Huleh swamps. Consequently, the swamps stretched along the demilitarized zone, hence causing perimeter skirmishes between Syria and Israel. Subsequently in 1953, as negotiations were on going concerning River Jordan basin distribution continuing. Israel initiated a National Water Carrier construction at the aperture point around Gesher B not Ya akov,the  northern parts of the Galilee Sea along the demilitarized zone (Shuval& Dwiek, 2007). In effect, Syria disputed using military stroke, following an universal disapproval, Israel relocated the construction to Eshed Kinrot. Incidentally, Jordan River diversion was among the recipe for the next conflict, referred to as the 1967 Six Day Arab-Israeli War. Practically, In 1964 Israel launched the National Water Carrier project and started to avert about 320 cubic meters a year from the Jordan, though Jordan was enduring its East Ghor Project. This prompted the First Arab Conference in 1964, which undertook strategies to avert the Jordan headwaters towards Arab countries. Later in 1965, the Arab Countries commenced construction regarding the Headwater Diversion Proposal; averting the Hasbani through Litani in Lebanon, as well as the Banias through Yarmuk joining Jordan and Syria through a dam along Mukheiba (Molle, Wester,& International Water Management Institute,2009). Significantly, this diversion ought to have lost would have 35 percent of Israel’s water deviation, and increasing the salinity rate in Lake Kinneret. Feelings escalated, and Israel declared a fight for its waters. Sequentially, between 1965 and 1967 the Israeli army confronted the diversion project in Syria four times in a row, these perimeter skirmishes resulted to air fights twice. In June 1967, Israel damaged the diversion constructed by Arabs and seized the Golan Heights in six days, including  the Gaza Strip, West Bank, and the Sinai Peninsula. This enriched Israels military and its hydro strategic location, since Israel possessed all the Jordan Rivers Headwaters along its terrain and turned it a riparian of the Yarmuk. Furthermore, Israel expanded access Jordan River length and manage the three main aquifers (Shuval& Dwiek, 2007).

Conclusively, following the Oslo peace process in 1992, most bilateral and multilateral negotiations were held. This resulted to the Principles Declaration amongst the Israelis and Palestinians in 1993. The Declaration specified phases of power transfer concerning West bank and Gaza strip regions. Fundamentally, a key feature was the formation of a Permanent Committee to talk over cooperation in water. Ever since, both parties have settled on the lawful principle of “fair utilization,” though no allocation has been agreed, yet the anguish of the Palestinians remains (Abukhater, 2013). Expressly, the multifaceted discussions on water within the area have emphasized on purification, water waste management, as well as pollution; though there ought to be settlement on water rights along the region. The other treaty was in 1994 amongst Israel and Jordan. Incidentally, Israel and Jordan have conflicted concerning water disputes all through their presence, and their correlation has continuously been in a war state. Unfortunately, this barred any undertaking concerning mutual water management. The Israel- Jordan Peace Agreement was the initial phase towards the right direction. The agreement concluded the state of war existed amongst each other, commenced full political dealings, and settled on the global border between them (Abukhater, 2013).