Achieving great things is a common thing amongst men but there are women with an extraordinary story worthy of emulation and Joanna Cassidy is one of them.

Joanna Cassidy, an exceptionally fantastic Scottish-Irish siren is an amazing personality in the world of acting. 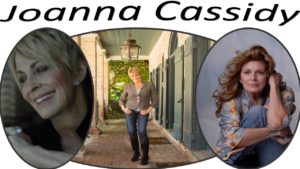 Popular for the things she was able to achieve not just as an actor but also as a woman. She was born in Haddonfield, New Jersey. Growing up, she had an environment filled with so many inspiring artistic works and talents. Joanna, from a tender age, showed some fantastic artistic talent in painting and making of sculptures. She got inspirations from her environment, her mother, and grandfather who are both artists. She followed in the footstep of both the mother and the grandfather (Both are artists). She was encouraged to develop the talent at the Syracuse University in New York as an art major.

Having a dream of your own has always been part of life but the size and how you can make it a reality differentiates you as an achiever from a dreamer. Joana is a very passionate woman with a big dream of having a career in science and art. This is a combination of two different worlds and she did achieve it to a significant extent.

The journey of Joanna into the acting world began right from college. Her journey began with modeling. She got a job in that field. She was fantastic with it. She was good and highly motivating.

Joanna found love while she was in college even while she was doing her job passionately. She got married to a doctor. The couple found a new home in San Francisco after the marriage and that was where it all began. A life as one of the best female actors the world would ever see. At first, her priority was taking care of her family and doing her best in her modeling career, which took off on getting to San Francisco. She gave little thought to acting. Her husband was able to set up a psychiatric practice in San Francisco. Though she has theater and comedy venues around her, she never imagined herself as becoming one of the superstars. Her view of life was different.

Her marriage ended after some period. Joana decided to move to Los Angeles to start a new life. Her life-transforming moment came when she decided to put a call through to a famous casting director Joyce Selznick to be auditioned for a role in a movie titled “The Laughing Policeman.” This became the beginning of a career as a female actor and a journey to stardom. She continued making waves and achieving height with every role, she gets. Her role in “the Outfit,” “The Bank Shot,” and The Late Show.” Gave her the opportunity to show her talent.

Diligence has always been a key to outstanding success. Joana demonstrated she is focused and diligent with her new career when she featured in some popular tv shows such as “Dallas,” “Taxi,” “Trapper John, MD” and “The Devlin Connection.”

With a constant demonstration of strength, courage, and dedication, her efforts soon began to yield good rewards. In 1983 she won a critical acclaim and an Emmy nomination alongside a Golden Globe for one of her fantastic role (her role has JoJo White in Buffalo Bill). This was a famous tv series that got people talking.

Success attracts friends. It increases your status. With success, you become the role model to many. Joana has demonstrated strength in so many aspects more than many women in the industry, her fan database increased with some of the fantastic act she was able to put up in movies she featured. In Blade Runner, she had the role of Zhora. She gained more awards, which includes Jordi (A Spanish Oscar) from her works on the 1979 Nicaraguan revolution, “Under Fire.”

Joanna has featured in so many award-winning television series such as the Emmy award-winning “Hollywood Wives,” “Live from Death Row,” “Fathers revenge” and lots more. Joana also got an Emmy nomination for her role as Margaret Chenowith. She got two genies for best comedic performance by a female actor.

Despite all the success in acting, Joana’s passion for painting, virtual arts, sculpting, and collecting, remains profound and amazing. She creates time out of her very busy acting schedule to make beautiful arts. Joanna is a multi-talented woman. She became an avid photographer despite being involved in something very demanding.

Joanna’s life outside of work revolves around the things she loves to do. They include workouts and garden activities

How much better can a world get if we do not give back? How do we touch lives if we do not care? Joanna Cassidy despite all she is involved in she is very active in the work with a charity organization where she gives to both children, elders and even animals. She is happy living her life and currently working on a book of her own.