IT Infrastructure Outsourcing at Schaeffer

Benefits That Schaffer Hope to Achieve From Outsourcing Its IT Infrastructure

There are so many benefits that Schaeffer Corporation hope to achieve by outsourcing its IT infrastructure. Let us discuss all of the possible benefits in detail.

Since the company is growing and wants to achieve ambitious growth goals in the future time, the company must be require improved and extraordinary technology support efforts, which is not possible using the current technology system because entering in to new countries and acquiring more business will need a great efforts from IT system. Currently, the company’s IT department is working on just day-to-day activities and probably not ready for the big box. If we talk about some outsourcing company’s like ABC in our case, they are well-developed countries and having operations in almost every country in which we are operating right now and wishes to operate in the future time. (Essaytyping.com, 2017) 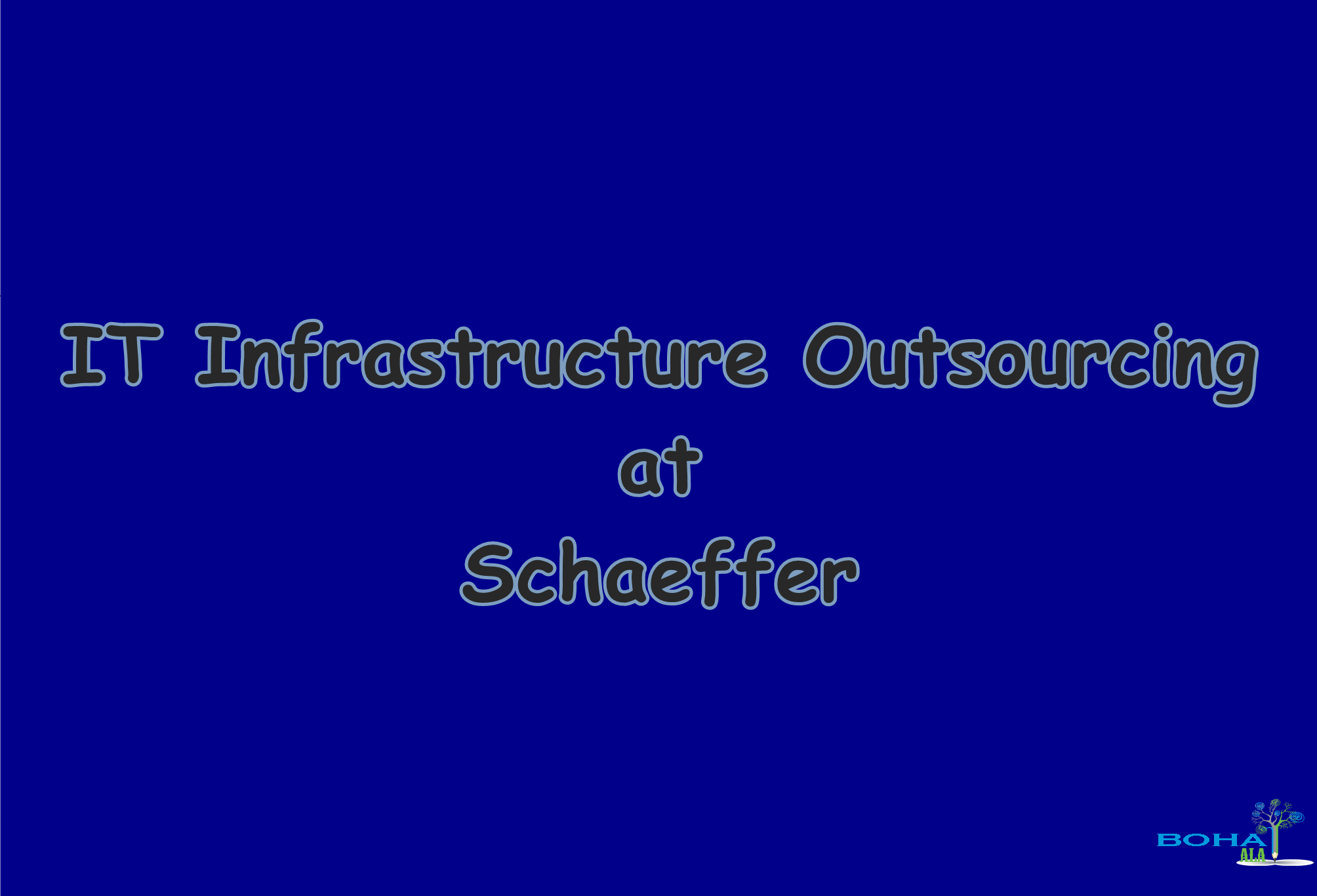 Moreover, the outsource companies has large amount of well-trained IT experts and they have access to current hardware and software resources which is not possible making the system in-house. If we look in to previous some years and work we can conclude that the IT department of the company is not working as efficient as they would be so having this kind of situation the company will be risker in future as far as growth goals are concern. The growth goals of the company truly support the idea of outsourcing the IT system.

Furthermore, it is clearly stated in the case study that Schaffer’s board has set the strategic growth goals based on growth through acquisition and geographic expansion overseas so this goal cannot be achieve without a flexible and well managed IT system. ABC company which is the choice of the Schaffer’s to go outsource with is a company which is having a large number of IT professionals which is almost impossible for the Schaffer’s to hire the same talent in the company, they also stated that we never had such well trained and flexible employees in our IT department ever. (Kuhlmann, 2012)

Saving money is another big benefit for the company by choosing the option of outsourcing The Company will save itself from lots of expenditures. Outsourcing will help company to save the expenditure of startup cost because the startup needs a lot of funds and a lot of expertise as well. We will not be wrong if we say that the option of outsourcing will save the company’s money by not investing in the current employees in terms of salaries, health insurance etc. It is difficult for the company to search for experts and invest money on them because there is no guarantee if the employee with stay with company in the future times or not.

Moreover, the company will save itself from any maintenance of the servers and most importantly, the development cost of the software etc. will be save by outsourcing. If we talk about the current IT situation in the company, we can say that it is not established yet in the company. They are standing on the zero level, as this is not the core competency of the company. Starting all of this from scratch will required a lot of money and the efforts too which is also not confirm that company will going to succeed in it or not, so the outsourcing is the benefit for the company in saving its funds.

Initially, the company will required a potential HR system that can hire a potential IT expert for the company this will also cost company, as they have to give training sessions to its employees on what kind of employees they need for their IT department and what is the need of the system on the future. Therefore, the option of outsourcing also saves company from training and sessions cost. (Julia Kotlarsky, 2011`)

Time is the most important factor in everything, the option of outsourcing the IT system will help company in saving time for other operations. Obviously, if the company is not going for outsourcing and planning to have their own in-house IT system it will take a lot of time to company to build the one. Company will save time on decision-making and on the tanning of the employees. ABC, which is the chosen option by Schaeffer for its IT services, is a very competent company, they have a huge number of employees, and each of the employee is IT expert. so, if company is not going for outsourcing option they will required a lot of time to investigate in to competent people and also on how to get the work done in short time period.

The option of outsourcing will help company in saving efforts that would be required to build up a new and a flexible IT system. The overall company needs to pay the efforts if they are not going for the outsourcing because it is not the work of few people to develop and search for IT experts. I will not be wrong if I say that the company needs to hire a experts to hire some experts for IT system, this whole procedure will take a lots of efforts from the company and there is a risk of not getting the right employees as well.

Moreover, the growth goal of the company will be achieved by this decision of outsourcing which help company in achieving overall efficiency.

The company spent some months on preparing a 200-page request for proposal (RFP), which includes what kind of work the company is exactly want to get done and the procedure on how the things will proceed in the future times. The company also have discussed the time and cost in the proposal.

The 200 pages proposal is all about what company wants to outsourced and what exactly the infrastructure and services of the company are. (St.Amant, 2009)

Identification of The Functions Which Are to be Outsourced

In this step company, clearly define on what work should be done and what are the expectations of the company with the outsourcing work.

Selection of The Bidder According To RFP

Role of Outside Consultant

The role of an outside consultant is very important here because the company was having less information on how and where to find the outsourcing companies. The company involved Gartner Consulting to work for them. They find it not easy and not a quick task to do the company realized that the procedure of outsourcing would take time. Gartner plays a significant role in guiding the company on what to do first; they guide them on knowing the proper functions of the company before going for outsourcing.

Moreover, Gartner helps the company in exploring what they are so that they can define it to the outsourcer that what exactly work they want to be done. Gartner asks for the information related to the current employees of the company and they specify the need of knowing the IT processes of the company very well so they can present it to third party. In short, the Gartner played a significant role in finding ABC Company with a right match. (Mehrotra, 2005)

Disadvantages To Outsourcing Raised By Its Managers

There were many perceived disadvantages by the managers, let us look in to in detail.

The concern of most of the managers was clearly points out the level of dependency the company will have if they outsourced its IT function. The managers perceived that this the disadvantage for the company to not in invest in in-house people and getting the outsource works done. They claim that building our own people will save us from dependency and we can get the long-term commitments from the in-house employees.

This is one of the major disadvantage that was perceived by the managers that this outsourcing will cost us more than anything was, they clearly describe the point that we will be needed some extra amount than we can do in-house. The managers argue that in future time we will lost our holdings on the real amount and we will only pay to the outsourcing company on what they show us. (Kehal, 2006)

Since the IT department of the company is very important part, the mangers were concerned that the control of the company will go to unknown hands in the future, they keep on trying to present the point of building the in-house capacity and spending on own people.

Since it is clearly, define that the data center will remain in Vilonia; the managers were concerned about the distance because they argue that most of the ABC’S functions are not operated in Vilonia and only less than 20 people are present there. They argue that what we will do if there will be any emergency. Further, they present that point that if we have it in-house we can handle any situation by contacting people and visiting them.

Fare Of Terminations Of Jobs

Since the company is going to outsource its IT department so it was threat for most of the people of particular department to end up the job if they do not fit in any other operations.

The finance manager of Colbert made the point that if we only outsource the IT system for the Reizel, then I would be unfair with the two other divisions because they will bear the additional cost with no additional benefits.

Moreover, the vice president of IT also present the point that it would be loss for a company to outsourced only one division as we reunite all the divisions previously, he also said that we won’t be able to achieve economies of scale if we only go for one division to be outsourced.

In my opinion the company should go for whole IT system outsourced for all of the three division because it will help company in future times, if the other 2 departments over performed in future years it will help company to have efficient IT support. The company will also bear an additional cost of making the in-house function for two divisions and outsourced only one division.

As we, all know that accepting change is very difficult for most of the people. The same situation had to see in the company where many people were not happy with this decision because they thought that the power of the company will be separated and we have to obey and depend on some other company.Moreover, many people were afraid of having commutation with ABC people they think that a lot of time and money will be required to build the relation between the people of that company.It is clearly define in the article that most of the employees were worried about shifting to another countries, which are far away from Vilonia, as they were not ready to go to some other countries so they resist accepting this.

The fare of lost/terminating of jobs was another problem in the company because nobody wants their jobs to be ended in any ways. The employees were very much worried about their jobs on what will be happened if the outsourcing gets real.

In my opinion, the controversy can only be avoided by showing and presenting the good side of the outsourcing system to the employees. The company heads need to give more and more descriptions to the employees on how this is beneficial for them and for the company as well.

The competent employees are the backbone for any organization so the company should retain them by providing the positive picture of the outsourcing project and the benefits attach to it, this is how the controversy in the company can avoided.