Antimicrobial resistance is not new, but the number of resistant organisms, the geographic locations affected by drug resistance, and the breadth of resistance in single organisms are unprecedented and mounting. Diseases and disease agents that were once thought to be controlled by antibiotics are returning in new leagues resistant to these therapies DRUG RESISTANT strains initially appeared in hospitals, where most antibiotics were being used. Sulfonamide-resistant Streptoccoccuspyogenes emerged in military hospitals in the 1930s. Penicillin resistant Staphylococcus aureus confronted London civilian hospitals very soon after the introduction of penicillin in the 1940 Similarly, Mycobacterium tuberculosis with resistance to streptomycin emerged in the community soon after the discovery of this antibiotic. Resistance to multiple drugs was first detected among enteric bacteria-namely, Escherichia coli, Shigella and Salmonella—in the late 1950s to early 1960 Such strains posed severe clinical problems and cost lives, particularly in developing countries Nevertheless, the resistance problem was perceived by some, most notably those in the industrialized world, as a curiosity of little health concern confined to gastrointestinal organisms in distant countries.This attitude changed in the 1970s when Haemophilus influenza and Neisseria gonorrhoeae, organisms that cause respiratory and genitourinary disease, respectively, emerged with resistance to ampicillin and, in the case of Haemophilus, with resistance to chloramphenicol and tetracycline as well. Fuelled by increasing antimicrobial use, the frequency of resistance escalated in many different bacteria, especially in developing countries where antimicrobials were readily available without prescription. Poor sanitation conditions aided spread and small healthcare budgets prevented access to new effective but more expensive antibiotics. Individuals may succumb to MDR infections because all available drugs have failed, especially in the developing world. Notable global examples include hospital and community MDR strains of Mycobacterium tuberculosis, Enterococcus faecium, Enterobacter cloacae, Klebsiellapneumoniae, S. aureus, Acinetobacterbaumanii and Pseudomonas aeruginosa (World Health Organization website). In developing countries, MDR enteric disease agents such as Salmonella Enteritidis, Shigellaflexneri and Vibrio cholera threaten and circumvent public health measures10, 11. Overall, in the United States and the United Kingdom, 40–60% of the United States and the United Kingdom, 40–60% of nosocomial S. aureus strains are methicillin-resistant (MRSA) is usually MDR MRSA  also show small resistance to vancomycine and that is the cause of failure of treatment.

The aim of present study is to isolate the multiple drug resistant bacteria and to check the role of resistance against streptomycine and ampicilline antibiotics whose gene present on integrone , the genetic element whose role in dissimination of multi-drug resistance present in mainly in gram –ve bacteria.we also studied the ranges of antibiotics against which the bacteria is resistant.

Stocks were made according to following formula

Working were made according to following concentration

SAMPLING AND ISOLATION OF STRAIN

First soil was taken from from hospital wastage  duming site and make dilution in autoclaved distilled water we used 10 fold dilution 70 ul of 10-3 , 10-4 and 10-5 dilution was spread on L.agar .and incubate the plates at 37Centigrade for 24 hours we obtained a large diversity of micro-organism the total number of colony of above plates in following order 100, 70,  46 and the colony were purify by several time streaking to obtained isolated strain the total number of strain was 13 that I obtained after streak

ANTIBIOTIC  susceptibility was checked by adding the antibiotics directly in media before pouring .then plates were poured and solidify  and then streak was done antibiotics resistance profiling was done for two antibiotics named ampicillin 2) strptomycine their stock were made in autoclaved water and kept at 4 C FOR MAKING STOCK I ADD 0.2 G of each antibiotics in 10 ml of autoclaved water working concentration was made 100ug/ml , 200mg/ml ,300ug/ml 400ug/ml .500ug/ml. strain were tested by streaking on each antibiotics separately 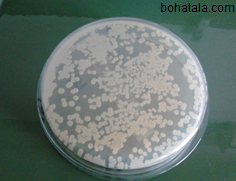 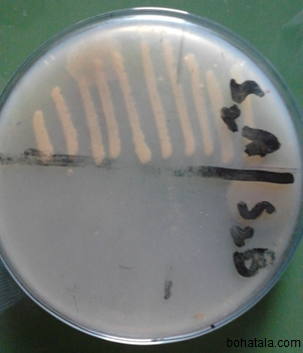 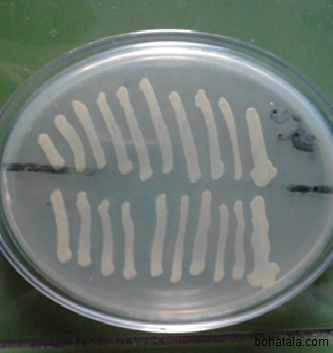 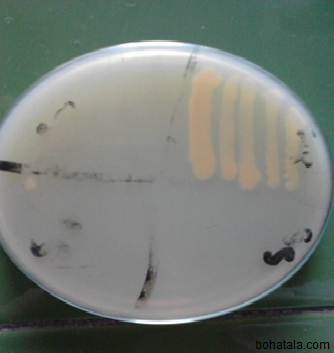 STRAIN that are resistant against antibiotics

The cause of increasing resistance among the bacteria might be due to development of MDR efflux pump against that drug due to its prolonged exposure at contaminated hospital dumping sites, due to mixing of both MDR and non MDR strains of pathogens at hospital waste disposal site resulting in genetic recombination of plasmids between two bacteria thriving at same place one of which might be MDR or induction of multi drug resistance by proteins secreted by MDR bacteria. Antibiotic such as Ciprofloxacin, Ofloxacin belonging to Quinilone family are considered to be best medicines in case of MDR infections and have broad spectrum effects/. As per the working mechanism it was observed that drug directly dealing with DNA replication i.e DNA Gyrase inhibition by ciprofloxacin are more potent and effective and are less proned to development of resistance by bacteria unless there is development of MDR efflux pump to that drug unlike inhibition of protein synthesis as done by tetracycline or cell membrane destruption by penicillin family of drugs. Protein source supplement like beef extract, yeast extract are the best source required for bacterial growth and proliferation, even they can support growth without any other additional nutrient supplement required. Bacteria usually produce its secondary metabolite in stress conditions in order to survive. Carbohydrate, amino acids, multivitamin capsules etc and metal ions acts as growth elicitors in case of many bacterial strains. The place of emergence of new and pathogenic strains of MDR bacteria can be hospital itself if not taken care of hospital dumped wastages. As in this study we isolate total 13 strain named as F10-F14 and Z1-Z8 the strain F10,11,12 are sensitive to antibiotics of all concentration while F13 is resistant to ampicilline and sensitive to streptomycine while F14 is resistant to both of antibiotics used in this study while the strain Z7 and Z8 are also resistance to both of the antibiotics that is the multiple drug resiatance strain it means the resistance strain have intergrone the genetics elements which play role in disimination of resistance.