Isolation and Identification of Pathogen From Diseased Sample

Black spot disease has become a serious constraint for successful cultivation of rose crop in Pakistan and rest of the world. The most prominent symptoms of disease included formation of purple to black spot (5-15 mm) with/without yellow margins especially on older leaves. Mortality of infected plants was also observed in severely infected plants. It was observed that Diplocarpon rosae was the casual organism of this disease. The greenhouse experiment revealed variation in pathogenicity of different pathogenic strains. Diplocarpon rosae over seasons as mycelia, ascospores, and conidia in infected leaves and canes.  Upon infection, disease progresses from the lowest leaves upward, causing defoliation and black spots on leaves.

Rose (Rosa sp.) belongs to family Rosaceae. There are over 200 species and more than 18000 cultivars of roses. There is a shifting tendency towards sourcing floricultural products from developing countries like Bangladesh, India and Pakistan. This is due to the increasing labour and energy costs in Europe. This trend has built up a pressure on the successful cultivation of healthy rose plants in the developing countries, like Pakistan. Pakistan being an agricultural country with diverse agro climatic zones has a huge potential for the cultivation of roses. Rose is an economically important horticulture crop cultivated throughout the world and is generally referred as king of flowers. It is also cultivated because of its medicinal importance. Various parts of rose plants are being used in different types of medicinal formulations. Its cultivation is performed in both open fields and protected greenhouses. Rose cultivation is increasing in Pakistan because of its ornamental and medicinal values. Roses provide high revenue to farmers and increase employment opportunities. In case of Pakistan, area under flowering crops is estimated more than 17000 acres. The increased utilization of cut flowers in hotels, restaurants and banquet halls business has resulted due to increased living standard of people. Nevertheless, a big gap between demand and supply of flowers and relevant products still exists.

Rose crop is subjected to a number of insect pest and fungal diseases. The management of rose diseases requires frequent use of fungicides that adversely affect the environment and raise costs of production. Diseases are an important reason for losses in agricultural crop commodities. It is estimated that world faces nearly 13% losses in agriculture produce because of plant diseases caused by a number of pathogens. More than 80% plants diseases are caused by nasty fungal pathogenic microbes. Therefore fungal diseases cause a severe reduction in production and subsequently lower economic return to grower. Leaf spot diseases caused by various fungi are a common pathological constraint of a number of plant species. Among different leaf spot diseases, black spot disease of rose holds an important place. This fungal disease is caused by Diplocarpon rosae, and prevails throughout the world. Almost all rose varieties are susceptible to black spot disease. D. rosae causes formation of purple to black spots on leaves and shoot of infected rose plants (Figure 1). The disease symptoms first appear on older leaves present on lower area of plants, later the symptoms spreads upwards. The spots may be round or may have asymmetrical or feathery ends. The infected area of leaves turns yellow around the spots resulting in premature leaf fall. Severe infection can result in complete defoliation and dieback of infected plants. Black spots disease reduces the number of flowers, marketable value of flowers, plant vigour and the life of plant. Occasionally symptoms may be observed not only on the leaves of the plants but also on petals (red spots, deformation), leaf petioles, fruit and shoots. The infected plants have unattractive appearance. The name Marssonina rosae is applied for the imperfect stage of the fungus while the perfect stage, D. rosae is rarely observed.  D. rosae may be cultured on artificial media; growth on media is very slow. D. rosae may be stored at -20°C or -80°C on foliage of rose plant or as a suspension of conidia . The optimum temperature for development of mycelium is 21°C. Since, leaves of rose plants raised in glasshouses present in the temperate zones may be kept dry; therefore these plants are not severely infected by black spot disease. Different pathotypes of D. rosae have been illustrated using polyconidial and monoconidial isolates. Furthermore, different morphotypes have also been observed. The scientists have observed genetic differences with different techniques and results indicate the existence of two main clusters of strains. 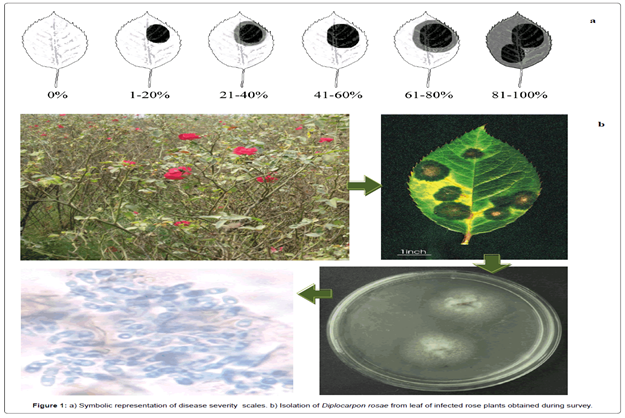 Materials requires for the collection of diseased sample are as follows:

For sample collection field survey is done.  The field area of rose was observed carefully and the diseased samples are collected in plastic bag. This step should done carefully so that the plant do not harm. After the collection of diseased sample the sample is taken into the lab carefully. It should be known that there not any moisture available in plastic bag that can decay the sample.

For the isolation of fungus the MEA (malt extract agar) media is prepared. For 250ml. 2g agar, 2g malt extract mixed in 250ml distilled water. The media is sterilized in autoclave at 121°C for 20 to 30mints to prevent from contamination. After some interval of time when the media is not too hot the media is poured into sterilized petri plates and stay them to cool so that the agar solidified. 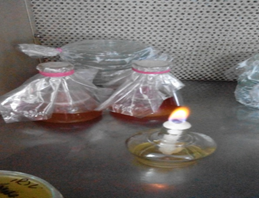 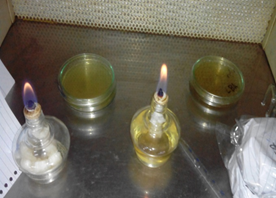 For inoculation 3-4 mm sections from infected parts of pre washed rose leaves were surface sterilized with 1.5% sodium hypochlorite solution for 60-90 s. These leaf sections were provided with several washings with distilled sterilized water and dried on blotter paper. After drying, the sample is placed on solidified gar plates carefully with the help of forcep.  These plates are kept in incubator at 37°C for 3-4 days. The fungal growth observed after 3 to 4 days. The fungus was white in colour. 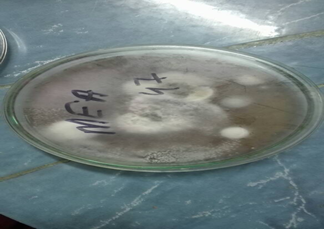 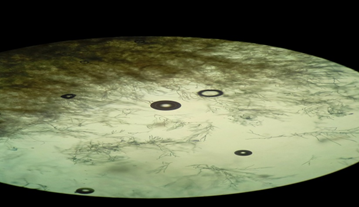 Application of fungicides is a most common strategy for management of fungal pathogens since a long time. It is observed that with the passage of time, many fungal pathogens have developed acquired resistance against these chemicals. Moreover, these pesticides have harmful effects on human being and environment. Keeping in view the detrimental effects of these fungicides, it becomes necessary to find out some safe strategy to manage diseases.

The Diplocarpon rosae causing black spot disease of roses is a serious problem for rose cultivation. It is therefore recommended to apply proper disease management strategies to reduce the damage and jeopardy of the disease. Genetic manipulation of rose varieties and application of appropriate strategies may enhance commercial value of this crop.