Understanding the international trade theories requires a basic understanding of the theories. This starts from also understanding how different nations trade with one another with respect to history. The major historical theories are known as Classical; these are based on the country’s perspectives, generally called country-based theories. 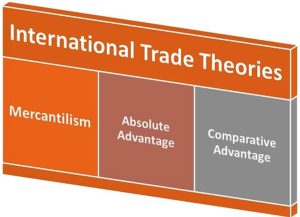 This theory stated that a nation’s wealth was determined by how much of gold and silver they hold. In a simpler sense, mercantilists put their beliefs that a nation should be able to increase the holdings of gold and silver by qualitatively promoting exports and discouraging imports. For example, if a country buys more from another country than they sell to that country, then they need to pay the country the difference in gold and silver.

In a more reasonable sense, the theory also stresses the fact that if one country has more gold than another, then it is better than that other country. Managers need to understand this theory to know that the target of every nation was to have a trade surplus, which is a situation whereby the value of exports are greater than the value of imports, and also avoiding trade deficit which is a situation whereby the values of imports is more prominent than the value of exports. When this happens, there will be a generation of net inflow of foreign exchange and then the country’s gold stocks are maximized.

This theory offered by Adam Smith concentrated on the ability of a nation to manufacture goods more efficiently than other nations. This theory stresses that the trade between countries should not be restricted or regulated by any government intervention or policy, but it should go along naturally according to the forces of the market. However, managers have to understand that these specializations would enable countries to generate efficiencies, due to the fact that their labor force would become extensively skillful doing the same tasks making production more efficient because incentives would be provided to develop faster and better production strategies to increase their specialization. With this theory, people in any of these countries would benefit greatly, and trade will be encouraged. As stated by Smith’s theory, a country’s wealth is not judged by the amount of silver and gold they possess but the people’s standards of living.

This theory offered by David Ricardo is in contrast to absolute advantage theory. The comparative advantage occurs when a nation is not capable of producing a product more efficiently than another nation; however, the country can produce their product more efficiently and even better than it does other products. Managers are required to understand this theory because it helps a country or person to specialize in doing their best. Furthermore, the world economy is very complex and comprises of more than two nations and products. Barriers to trade may exist, and the transportation, storage and distribution of these goods must be taken into consideration. 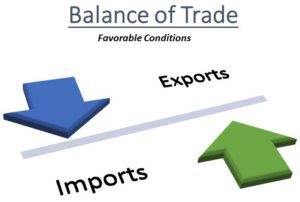 This theory expresses the contrast between the value of the exports from, and imports coming into a nation: the balance is characterized as favorable when the value of the exports surpassed that of the imports, and unfavorable when the imports’ value surpassed that of the export. Furthermore, in numerous nations, this was longer accepted to be the case, since then they were annually congratulated by their finance ministers on the how excessive exports is over imports. Managers need to understand the way a favorable balance is attained and how important it is to the financial world. More also, since the balance of trade is an indication of a good economic condition of a nation, it is, therefore, necessary to understand what it entails.

How and Why Government gets involved in International Business

The government follows some economic and non-economic analytic strategies in their international trade. And they are involved for economic and political reasons.

For political reasons, they try to protect jobs and general commercial enterprises from the international business, they also protect national security through their involvement, protection of consumers for good standards of imported products and also the improvement of human rights with other nations. For instance, if there’s a possibility for countries to flood the market with their flour, then domestic manufacturers would lose business. The entire flour industry and even jobs could be lost if the flour is purchased continuously for a cheaper amount.

For economic advantages, they protect new commercial enterprises from fierce competition, and also for strategic trade policy reasons; to ensure that not only large global firms should survive. This is seen in an example with Brazil, due to protectionism means, they were able to develop 10th largest auto industry in the world because of quotas and tariff barriers. But when the removal of those protectionary means occurred, their foreign imports increased dramatically, making their auto industry unable to compete with their competition.

It is obvious for these reasons that government impacts our company, we benefit from the protection rights we gain from other countries, we also benefit that the raw materials and goods we use for our own manufacture are safe and good for our consumers. Finally, our organization is capable of standing firm in the global market because of the involvement of our government to help uphold the policies related to it.