Inbreeding is when closely related individuals continuously mate to produce offsprings within a small community which in turn is a part of a large population.

In humans the inbreeding might be occurring due to either cultural, religious or ethnic reasons and other times mainly just due to preferences.By inbreeding a lot, individuals are causing the genetic variation to further decrease along with the increase in the homozygosity in the genome of their offsprings. Hence the probability of accumulation of deletorious homozygous recessive alleles is increased to a great extent in such a small population.

The reasons of inbreeding in animals is totally different as compared to the above ones, in them it is largely due to geographical barriers.

Some examples of natural inbreeding in the animals are as follows ;-

The females of this species prefer a great deal to mate with its own brothers and fathers, over some outside stranger…

It is a parasite, when females of this specie is heavily impregnated then the male offspring which is up till now present within the whomb of the mother, mates with all of its sisters hence impregnating them as well. When the offsprings are born then the males immediately die off after birth since their work is now completed. The females [ his sisters ] then survive to give birth to the next generation within 4 days. Hence this cycle continues…. 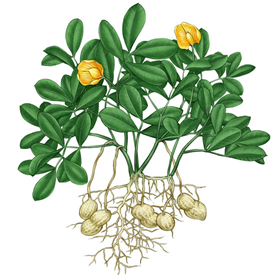 Some plants are naturally inbread [ naturally self pollinated for example the peanut species. Even after several generations of inbreeding these plant species don’t suffer from the inbreeding depression. Once a specie is established by self pollinating then even if any new mutation arises it quickly becomes homozygous and gets eliminated by natural selection, before it establishes up in a population. It doesn’t matter that if a plant gets homozygous for a harmful allele, still the whole specie would be  containing plenty of genetic variation.

Inbreeding is simply defined as the mating of relatives. It is a mating system in which individuals carry alleles that originated from a common ancestor. Inbreeding is considered a problem in humans because inbreeding increases the chances of receiving a deleterious recessive allele inherited from a common ancestor. When discussing inbreeding, the level at which is taking place becomes important. Most studies are concerned with close inbreeding, also known as incest, which usually sets a threshold at the level of first-cousin mating

Inbreeding was very common among the royal families of Europe, and it has been linked as the cause of the widespread number of cases of hemophilia in the families.  The presence of hemophilia in the royalty of Europe started with Queen Victoria of England.  Victoria is thought to be the original carrier for the recessive X-linked hemophilia gene, which lead to over twenty members of royal families inheriting the disease in just over 100 years.  The disease was spread throughout Europe, because Queen Victoria’s children and grandchildren married into many different royal houses in Europe to create political alliances.  Females can only been carriers for the rare blood clotting disease if one of there X chromosomes contains the deleterious recessive allele.  Moreover, males inherit the disease if there X chromosome carries the gene for hemophilia.

Hemophilia spreads rapidly through the British royal house for several generations, and inbreeding in the family was seen as a major cause of the deleterious recessive allele’s frequently through the lines of British royalty. Moreover, the disease was also spread into the royal houses of Russia and Spain by descendants of Queen Victoria. Victoria gave birth to three children with the hemophilia allele; Leopold, Alice, and Beatrice.  Alice then gave birth to two female carriers and one male hemophiliac. One of the carrier daughters was Alexandra, also known as Alix.  Alix was married to Nicholas the Czar of Russia in 1894. Alix then had tremendous pressure on her to produce a male heir.  She finally gave birth to a male, Alexis, but he had hemophilia. This lead to political unrest in Russia, and the royal family was executed by a firing squad during the Russian Revolution.

Another historical example of the detrimental effects of consanguineous marriages is the most famous HOUSE OF EUROPE the HOUSE OF HABSBURG which is extinct by now. From this generation came Henery the 8 among many of his daughters was Elizabeth the first. And then Charles the 2 of Span was born. His mother was his fathers niece and his grandmother was also his aunt. Due to the immense inbreeding that has been continued for ages he suffered from a number of genetic disorders and congenital abnormalities. Like he could not speak until he was 4 he could not walk until he was 8, he had a deformed jaw which made him unable to chew and swallow. And he died at the young age of 38.when his body was taken out for examination and to find out that what was the reason behind his death, they found out that his head was filled with water, his body had not even a single drop of blood, his intestines were rotten and he had an extremely tiny heart.

They were 8 tribes closely allied to Jews living in Israel. In Roman times [5th century] their population was over million. So inbreeding was not that big of a problem. Marriages to outsiders were discouraged. And at that time since the population was so large so inbreeding was not a problem. But then population bottleneck occurred in the 1917 leaving only 147 members, Then they partially recovered from this shift by extreme inbreeding, with 46%  cousin marriages, because their very few people to chose from. This lead to serious problems. The inbred populations had 10 folds higher frequency of diseases as compared to that of the outbred population. There were High rates of spontaneous miscarriages being observed so they became conscious of the consequences.

So they adopted some genetic interventions that will reduce the harmful consequences of inbreeding like ;-

This genetics to the rescue raised difficult questions for the Samaritans Like;-

EFFECTS OF INBREEDING IN HUMANS

50% common alleles in them

Then the Child’s chances of homozygosity is 12.5 % 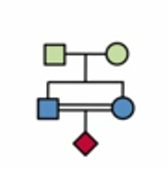 When heterozygous are crossed then it results in the homozygosity of 3.1%

Inbreeding co-efficient is defined as the fraction of alleles expected to be identical by descent in one individual i.e.[offspring]

There are a number of recessive alleles present in every human being but they are not in homozygous condition. But when siblings or cousins choose to mate with one another then the chance of accumulation of the same recessive alleles is increased to a great extent. but If a person chooses to mate with someone random in a population then the chances of that individual to be heterozygous is greatly reduced. Tay sach’s disease is a condition in which there is a deffective gene at chromosome 15. Normally this gene produces an enzyme which breaks down gangliosin which otherwise gets accumulated in the brain and causes death of the patient at an early age of 4 or 5.

There is still no cure to be found for this disease.

The most basic reason of the inbreeding done in animals is of that of mice for the research purposes, and then eventually distribution of them in all the national labs so that they might be able to compare the results that they separately but simultaneously have obtained. Deliberately inbreeding in mice is done to get stable phenotype for biomedical research purposes. So that specific characteristics might be obtained. When the researchers inbreed mice by sib-mating up to 20 generations  then they produce uniformity but then the problem of inbreeding depression arises. Inbreeding doesn’t mean that the mouse is sad but is unfit for survival. These mice  then contain all the harmful recessive alleles they are 99% genotypically similar.e.g the albino mice has low PKC activity  but is resistant to salmonella and the agouti mice has glucose tolerance but has poor spatial learning. 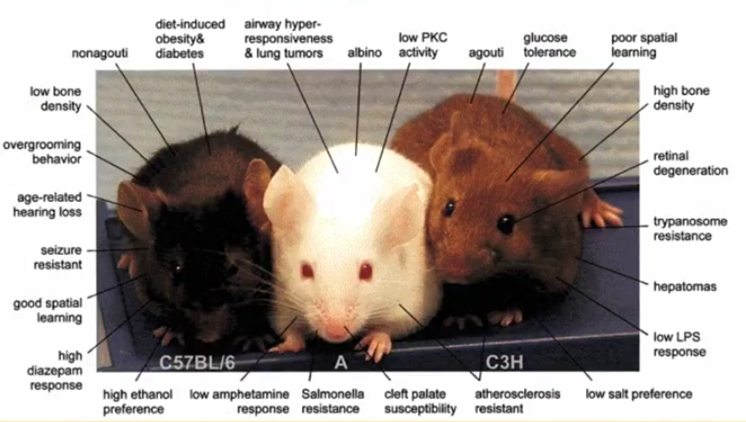 Inbreeding depression — the reduced survival and fertility of offspring of related individuals — occurs in wild animal and plant populations as well as in humans, indicating that genetic variation in fitness traits exists in natural populations. Inbreeding depression is important in the evolution of out-crossing mating systems and, because inter-crossing inbred strains improves yield (heterosis), which is important in crop breeding, the genetic basis of these effects has been debated since the early twentieth century. Classical genetic studies and modern molecular evolutionary approaches now suggest that inbreeding depression and heterosis are predominantly caused by the presence of recessive deleterious mutations in populations.

How To Calculate Breeding Value