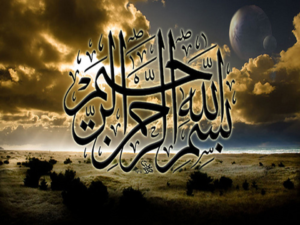 A remittance is a transfer of money by a foreign worker to an individual in his or her home country.

Remittance refers to the transfer of money by the foreign migrant workers to their family and friends in their home countries. Remittances assist the economic growth throughout the world. The money

sent home by the migrants makes up second biggest financial inflow to numerous developing countries and it exceeds even the international aids. A majority of the remittances from USA are focused towards the Asian countries. India tops the list of remittance receivers from USA, followed by People’s Republic of China. India is the leading recipient of Remittance for past many years.

Remittance Transfer can be either domestic or International. If the money

gets remitted within the same country then it is termed as Domestic. In fact,10% of the world’s population makes a part of the remittance procedure. Most of the remittance receivers are economically poor people, and it leads to better economic conditions for them.

What is Economic Growth 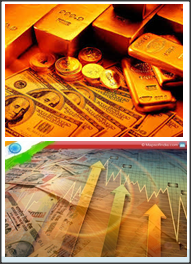 of the population over a period of time.

Remittance is playing increasingly a large role in the economism in many countries contributing to economic growth.

The economic impact remains contested among researcher, however, remittance transfer do draw people towards the financial services that are available to them.

The facts related to the remittances are mentioned below:

PayPal is very popular payment method that is accepted everywhere in the world.

UAE exchange world’s total money transfer is the leading global remittance and foreign exchange brand that offers its customers a wide array of services to make life easy for them.
The quality services include xpress money,the instant money transfer service with over 135,000 payout locations in more than 125 countries.
These popular services have made UAE exchange a true financial supermarket

and businesses. When the household receives remittances in addition to income from production, the household seeks to spread these remittances across consumption and leisure according to their respective marginal utilities.

The reduction of steady labor supply leads to a decrease in income but it is not enough to offset the additional resources from remittances. Therefore the total household income increases in the presence of remittances which leads to an increase in household in consumption, confirming the widespread belief that remittances helps in poverty reduction and improves the living standard.

The ways in which remittances alleviate the poverty of individuals are, direct and fairly obvious. They include the following;

Consumption ‘smoothing’: Many recipients of remittances, especially in rural areas, have highly variable incomes. Remittances allow better matching of incomes and spending, the misalignment of which otherwise threatens survival and/or the taking on of debt.

Education: In many developing countries, education is expensive at all levels, whatever the formal commitments of the State. Remittances can allow for the payment of school fees and can provide the wherewithal for children to attend school rather than working for family survival

Housing: The use of remittances for the construction, upgrading and repair of houses is prominent in many widely different circumstances.

Health: Remittances can be employed to access preventive and ameliorative health care. As with education, affordable health care is often unavailable in many remittance-recipient countries.

Social spending: Day-to-day needs include various ‘social’ expenditures that are culturally unavoidable. Remittances can be employed to meet marriage expenses and religious obligations and, less happily but even more unavoidable and related costs.

Consumer goods: Remittances allow for the purchase of consumer goods, from the most humble and labor saving, to those that entertain and make for a richer life.

Of course, the extent to which remittances reduce poverty is explicably bound up in how they are used. Typically for poorer recipients, remittance payments are used for basic survival, consumption, housing, health and education, as per above. Once these needs are met, however, remittances can be ‘invested’ whereupon they provide ‘second-round’ impacts on poverty into the future. the extent to which remittances can be used to create income-generating activities. Expenditure on agricultural equipment and fertilizers, vehicles, retail stock and equipment and on land improvement are not uncommon forms of investment of remittance earnings. 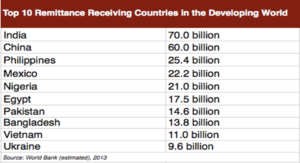 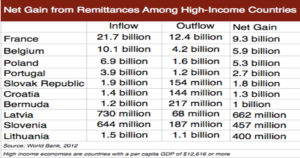 There are two types of Remittances; 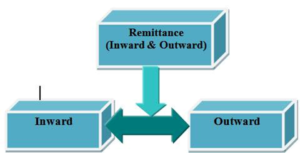 There is no restriction on receipt of remittances from abroad either in foreign currency or by debit to non-resident Rupee accounts of banks’ overseas branches or correspondents. Authorized Dealers may freely purchase T.Ts, M.Ts, drafts, bills etc., expressed and payable in foreign currencies or drawn in Rupees on banks’ non-resident Rupee accounts.

Outward Remittances
The term “outward remittance” means sale of foreign exchange in any form and includes not only remittances by T.Ts, M.Ts, drafts etc., but also sale of travelers cheques, travelers letters of credit, foreign currency notes and coins etc. Outward remittance can be made either by sale of foreign exchange or by credit to non-resident Rupee account of banks’ overseas branches or correspondents.

Unemployment: As a consequence of the global economic crisis, 2009 marked a hiccup in the trend of increasing remittance flows to developing countries. In most parts of the world, the growth rate of remittances was indeed negative. But what is striking is that there was an inverse relationship between remittances and unemployment. 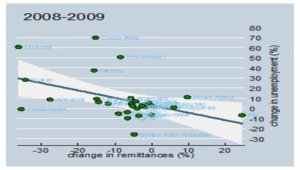 Attraction of Higher wages: Professionals turn to developed countries because of higher wages and better perks and benefits.

A Growing Demand: When receiving money from abroad, families must often battle extended commutes via public transport, long lines and arduous paperwork – not to mention the anxiety and safety concerns of traveling within urban centers with large sums of cash.

Traditional Mode of Money Transfer: Traditional/offline way of money transfer consists of sending cheques, Demand/Bank Drafts.   It takes time to reach the cheques/DDs in the destination and also collection of outstation cheques/DDs needs more time and banks normally charges large amounts as collection charges.  And also there is a chances of cheuque/DD lost in transit.

Agent Transfer: You need to visit an agent location carrying currency notes and verification details such as passport or approved Identification Cards among others to make a remittance.
Note: There are several disadvantages in this medium: no guarantee if money is lost in transit; depends on agent availability and working hours; quite expensive,

Wire Transfer: A bank wire transfer is an electronic transfer of funds from one bank account to another. But, the disadvantages are very high transfer fees, your amount will get transferred in about 1-2  days but the cost can be quite steep.

Remittance through ATM: Technology is so advanced, the business of international payments have become fast, flexible and even free at times. The new generation private banks have started internet-based remittance services, to serve the needs of those who send money back to their home country.

Demand Draft “DD”: A demand draft or “DD” is an instrument most banks in India use for effecting transfer of money. It is a Negotiable Instrument. To buy a “DD” from a Bank, you are required to fill an application.

Mail Transfers or Mail Orders: This is the mode used when you wish to transfer money from your account in Center ‘A’ to either your own account in Center ‘B’ or to somebody else’s account. In this mode of transfer, you are required to fill in an application form similar to the one for DD, sign a charge slip or give a cheque for the amount to be transferred plus exchange and collect a receipt.

Telegraphic Transfers or Tele Orders: This is similar to the Mail Transfer except that the message is sent to center ‘B’ by way of a telegram and the money is deposited the next day. The mode of instructions nowadays is increasingly the fax.

Electronic Mode: More and more banks are now offering electronic mode of transfer of funds like Electronic Transfer System, Cash Management product etc. The remittance of funds through these modes is much quicker and the time is reduced to hours and in some cases even minutes.

Effect of Remittance on Economic Growth

Remitting involves financial institutions, people who send and receive remittance are likely to have bank accounts, which promotes economic development.

Remittance inflows can not be denied in term of growth enhancement and poverty reduction.

Trade Deficit: Is an economic condition that occurs when country is importing more goods than it is exporting. It raises the standard of living of a countries residents. A trade deficit can also indicate that the countries residents are feeling confident and healthy.

Redistribution of Wealth: It helps the equalize the income distribution. It reduce poverty and income inequalities by rising the average level of income per capita.

Increase in Saving: Remittance help to increase the rate saving and as a result increase investment.

Increase in Productivity: More investment will result in more productivity.

Remittances has been shaping the economies of many countries and making effective contribution to economic growth as well as the livelihoods of poor people. The remittance receivers depend on the money sent to them for living a fulfilled life and they have a higher tendency to own a bank account. Remittances make the access to financial services effortless for both sender and recipient. In fact, remittance plays a major role in the promotion of economic development. As per the statistics, the top recipients as per the share of remittances in GDP comprises of many smaller economies like Tajikistan (45%), Moldova (38%), and Honduras (25%).

The remittances are rooted into the migration people life since the time of history. During the 19th and 20th centuries, many European countries like Italy or Spain, were hugely dependent on remittances sent by their emigrants. These countries had formulated policies on remittances after doing significant research efforts in the field. Italy became the first country in 1901 to enforce a law for the protection of remittances.