Korean Steel Industry Based on The View of Chinese Domestic Policy

South Korea accounts for 10.2% of steel exports in the U.S 2017, it is the third largest exporter after Canada and Brazil. According to the global steel trade monitor data provided by International Trade Administration, the volume of South Korea’s 2016 steel exports was less than a third of the world’s largest exporter, China, and just behind the third-largest exporter, Russia International Trade Administration, 2017). With the development of civilization, the discovery and utilization of iron brought a revolutionary change to human life. The steel industry is large scale capital intensive equipment and a key industry that provides basic materials for major industries

Therefore, the steel industry has a large ripple effect on other industries, high initial investment costs for the implementation of the specific project, and significant economic effect (Huh, 2011). The steel industry greatly affecting the growth and development of the enterprise and is an important indicator supporting the national economy and foreign competitiveness. The automobile, shipbuilding, machine and construction industries played a pivotal role to the remarkable growth of the Korean economy, and the steel industry, which is the basis of their products, plays an important role to those industries (Yun, Yang, Kim & Hong, 2014; Lee, 2011). Since the establishment of POSCO in 1968, the Korean steel industry has experienced a remarkable growth both in quantity and quality due to the increase in demand for steel because of the high economic growth and industrialization. 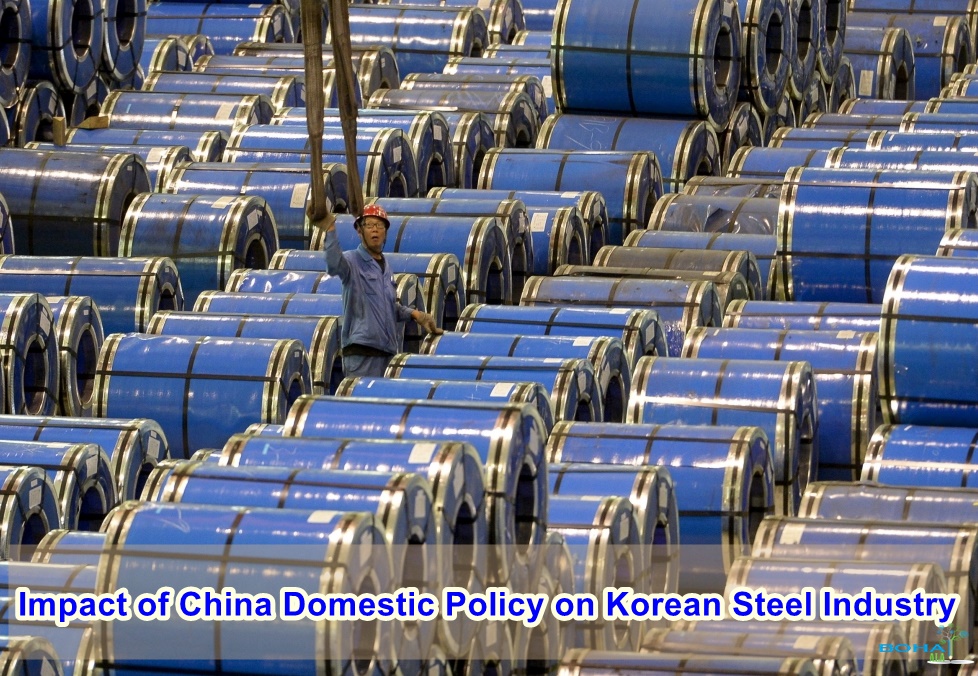 However, since the 1990s, competition with advanced steel nations has become more intense and the Korean steel industry has been in crisis due to the emerging steel companies in developing countries. The world steel industry was dominated by European and American steel companies until the middle of the 20th century, but since the 1970s, starting with Japan, Korean steel industry has rapidly emerged, restructuring the global steel market. Since the 1990s, the steel market has been reorganized by emerging steel companies such as Brazil, India and China (Zhou & Yang, 2016). In particular, the centre of the global steel industry has shifted from Europe and US, which were former strongholds, to East Asia. The US, which occupies more than 50% of world crude steel production, has fallen sharply since the 1970s due to the failure of prevailing in mainstream technology and the decline in domestic demand because of the industrialization advancement

Korean steel industry is considered to be one of the leading industries in the world. It is making the 1.5% of the whole industry in the world and it also provides on a large amount nearly equal to 4.9% of the manufacturing departments. It is providing a large amount of steel to other industries like construction, automobiles in the formation of their products. The steel industry in China is the most efficient and large industry and Korean industry is going to meet him soon in near future as its growth rate increased day by day which is clearly be understood in the graph below (Kosa.or.kr, 2016).

Korean steel industry is not only serving its own country industries and other departments using steel but it also competes with the worldwide industries of steel. It is also providing enough amount of steel to the world industries which ratio is as follows: (Kosa.or.kr, 2016)

In 2014 South Korea rate of exports increased at the highest amount of nearly equal to a record business of 3.16 million metric tons. It is been a record among all other industries of steel in the world. Gradually in 2016 to 2017 its amount of exports raised to about 72 percent or 11.3 million metric tons. It reforms its production and produces some flat products of steel so that they can be unique items and they are exported more from their country. The top 10 industries of Korea that are showing the performance rate in YTD AT 11.5 million metric tons in 2017. This is a good rate of exports considered worldwide. (Trade.gov/steel, 2017)

Korean steel industry runs smoothly and efficiently on the basis of Chinas domestic policy. The policy is considered to push the Korea on a new place on the map of the world. The Korean people became very much hard work and intelligent as well they wanted to become as successful as China that all the other countries will consider their services in terms of every aspect of life. They are improving their industry of steel gradually so well that soon it will meet the place of China in the world in the formation of steel. As they are producing many new steel products with highest quality and long resistant in steel.

Management of steel industry association of Korea has introduced too much interesting and success gaining policies which help them a lot in terms of having success and good place with excellent reputation in the worldwide steel industries. They researched well and conducted many unique and different policies in their industry that helps in smooth processing of the steel industry. The policies they made are friendly for the members and for the atmosphere as well. In other words they made sustainable policies that keep the environment clean and healthy as well. They have side policies that could e implemented efficiently in case of difficulty and any problem in the Steel industry. (KOsa.or.kr, 2018)

China’s steel industry is considered the world’s highest rate producing steel in the worldwide industry. The GDP rate of its growth is very much high among other country’s industries. The quality and efficiency of its production of steel and as well as it timely policies made him efficient and capable as well. The steel corporation of China is created or established in December 1971. In the start of its working they have around 10 million tons of steel production in their industry. They produces a lot of different products of steel like bars, rolled coils, steel coils etc. The company working techniques and policies are so efficient that they will practice a lot of success in its future.  (Csc.com.tw, 218)

China is the world’s largest exporter because it is exporting its steel in the world in many countries and with best results and great efficiency as well. China’s export rate is about 23 % of the overall exports with different big developed countries and it globally exported equal to the world’s second and fourth third place in the world among other countries; like Japan, South Korea and Russia as well. They export in more than 250 countries and territories because of that they will have the best place in the world steel industry as they provide the best steel with the highest quality and the greatest efficiency as well. (Trade.gov/steel, 2018)

Korean steel industry has to tackle many of the problems in their formation and in their exports as well. The most important and to be considered carefully issue is the new tariff policies implemented by Trump that it has increased the amount of tariff in terms of importing or exporting steel from other countries other than the U.S. It also announces that whether any country even passes from its state then they also have to give the tariff tax in order to pass comfortably by their state. This policy is badly affecting the exports, imports and the working of the steel industry in Korea at a large amount. Koreans protested against this tariff amount but it is of no use. (Hyunjoo Jin, 2018)

Comparison of International Competitiveness Between Korea And China

When we compare China and Korean steel industry then we will found not a very much difference in their production rate that they are serving worldwide. Their rates are in comparison with each other and they are competing with each other from 1 to 2c points on the ratio of production of steel. China has around taken half world’s place in distributing and making steel production in exports and apart from that Korean is nearly equal to China but not very lose as it makes the other half of half ratio in steel production in the world. (Guilford, 2014)

South Korea is protesting against the duties taxes that are imposed by Washington on anti-dumping duties up to 60.8 % at once. The issue was this rate was very much high for the Korean government and as well as the steel industries because it has taken a large amount of profit in just taxes. They protested against it because this was not acceptable for the Koreans. They two organizations have gathered a meeting and apart from that, they decided that if the problem does not get solved then they will call many further higher places and organizations to help them in their protest. (Yonhapnews.co.kr, 2018)

Prospect And Reform Plan For The Korean Steel Industry

Korean steel industry is already leading in the growth and development in the steel department yet it needs some reforms and changing that makes it more beneficial and successful among other countries. The most important and essential of that in them is the making of the steel in the more sustainable environment and as well making the production much efficient and of high quality which leads to the development and growth of the steel industry. As well. They reformed many employees policy and as well as many formatting and manufacturing policies as well in order to improve the working efficiency and as well as the improvement of steel production as a must. (Dr. Chung, 2017)

Concluding remarks are very much obvious and simple as it is clearly shown that the growth rate of GDP in the whole world also depends very much on the steel production. Countries that are taking much keenly the interest of the production in steel and which are leading as well are Japan, Korea and China with the U.S as well These countries are taking a very much important part in the export and import of the steel across the world. Korean industry is now leading the steel industry in the world but due to some stupid tariff policies of Trump, it has to face a lot of difficulties which must be protested to change otherwise it became difficult for the Koreans to maintain the top place in the world in steel production and exports as well.