IKEA is a well-known global brand; it has hundreds of stores across the world. The company was founded in 1943, the company carries the range of 9500 products, which includes home furniture and accessories. The company showed the sales of 21.2 billion Euros in 2008. IKEA’s is showing an increase in it sales every year as it is focused on creating the life better every day for its customers. However, in 2015, the company estimated its total sales as 31.9 billion Euros. The total sale is increased by the 11.2 % (IKEA, 2015). The company is focused on the low price strategy, it serves the customer who is willing to buy better even at the lower prices. The company has the well-designed products at reasonable rates and the products are catering for everyday life style. IKEA’s goals of the business strategy include the combination of economy, society, and an environment. 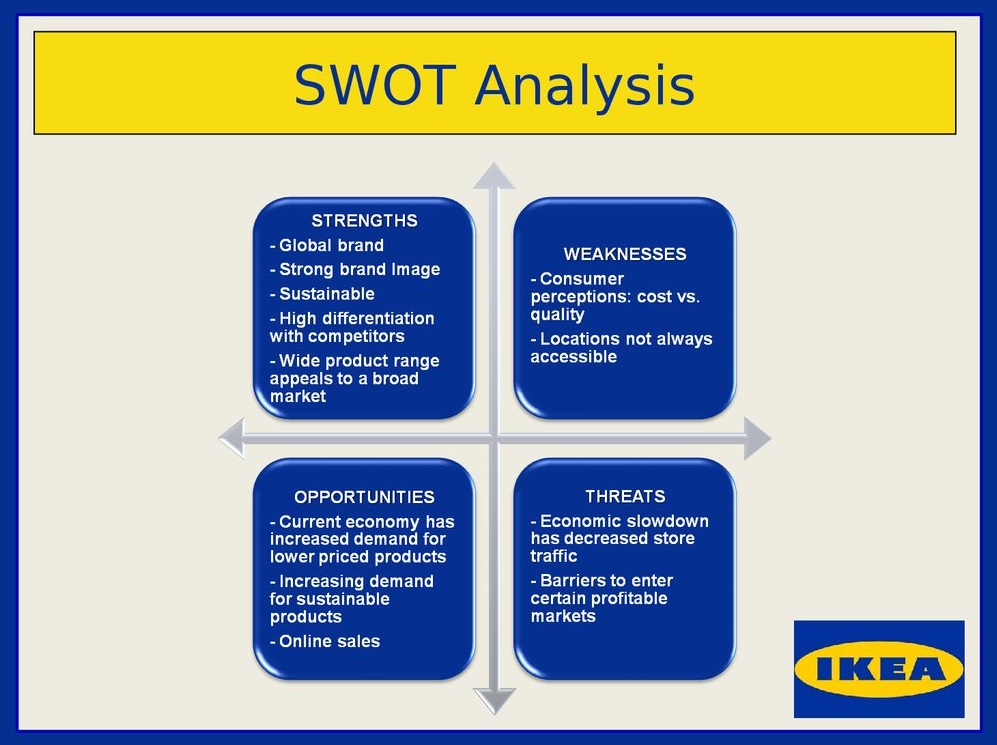 strategic planning tool; the company is focused on improving its strengths, opportunities and trying to overcome its weaknesses and threats. IKEA respond to both internal and external issues, the company in a proactive and dynamic manner retaining its strong identity in the market.

The company is a strong global brand, which attracts the consumers.

Current ratio of the Ikea Company is greater than its competitor West Elm that means, Ikea is more stable in paying its short-term liabilities with the help of its current assets.

Quick ratio is also known as acid test ratio. Quick ratio of the Ikea company is greater than its competitor West Elm that means, Ikea is more stable than West Elm in paying its current liabilities when it comes due with only quick assets.

Cash ratio of the Ikea company is greater than its competitor West Elm that means Ikea is more stable than West Elm in paying its current liabilities with the help of its cash and cash equivalence (Ikea, 2015) .

The return on asset ratio of the Ikea is lower than its competitor West Elm that mean, Ikea is not stable in compare to West Elm in earning profits in relation to its resources.

the return on equity ratio of the Ikea is lower than its competitor West Elm that means, Ikeas has lower ability to generate profits with the help of its shareholders equity.

Operating margin of Ikea is higher than its competitor West El m that means Ikea is generating more revenues than West Elm after its cost of good sold and paying other expenses (williams-sonomainc, 2014).

Receivable turnover is indicating that how much sales is generated with the help of receivables. This ratio indicates capacity to generate sales from receivables. Receivables turnover for the competitors is higher than the IKEA Company.

It indicates that how much day’s company takes for collecting its payment for credit sales. IKEA takes more time in collecting revenue from sales. It is 28 days for IKEA and 5 days for its competitor.

It indicates that how much time inventory sold in the market. Higher ratio indicates higher demand for the inventory. It is same for both companies.

It indicates that how much revenue is generating from assets. It indicates efficiency of utilizing assets by the company. This ratio is also higher for the competitor.

Working capital indicates liquidity ability of the company. This is higher for IKEA. It is calculated by subtracting current liabilities from current assets.

This ratio is higher for IKEA and it is indicating better liquidity for IKEA as compared to its competitors.

Total debt to asset ratio explains the ability of proportion of the asset of the company which are financed by its debt. The ratio of Ikea is lower than West Elm that mean it has lower debt than its competitor West Elm.

Long-term debt ratio explain that the proportion of the company’s asset is financed by it long term debt. The table shows that the West Elm has not long-term debt as compared to Ikea. Ikeas has some long-term debts.

This ratio explains that how a company is financing its assets with its shareholder’s equity. Total

According to the table, the West elm company is utilizing large proportion of its debt as compared to Ikea in financing its assets.

Ikea is private company; it is not listed in the Stock Exchange because it is owned by foundation based in the Netherlands. So the stock of the company cannot be bought held or sold.

It is recommended for the company that it should focus on its efficiency ratios. It is recommended that it should invest on management abilities to improve this ratio. Company is strong in term of its liquidity position. Its liquidity ratio is strong. These are indicating that in future it can handle uncertainties. Liquidity ratios can provide it opportunity to invest in other sectors. It can further invest in the securities. It can use this excess cash to improve its payout ratio.

It can attract more investors by paying more divided. It is recommended that company should resolve its problems by taking actions like diversification. It can also reduce competition by investing in diversifying products. It can add diversifying products in its portfolio to improve its position in the market. It is recommended for the investors that they should buy these stocks because they are generating god earnings and dividends with the passage of time. IKEA should also invest in research and development due to its strong liquidity ratios. It should invest in these technologies to improve its quality of products to resolve its future issues.