Ice-Fili is the oldest and the most successful Russian ice cream producer. This company has been thriving in an increasingly challenging domestic market with aggravating competition (Vögtlin, 2007). This paper presents a case summary of Ice-Fili which describes the performance of this company in the local market.

Ice-Fili has held onto market leadership in Russia for a long time, surviving many tumultuous moments including 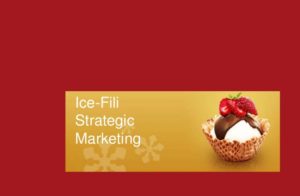 the 1998 financial crisis and the transformation of the economy of Russia from closed to open economy. One of the reasons for the successful performance of this company in the local market is favorable political which has favored this company for a long time. Prior to the transition of Russian closed economy to an open economy, the Association of Russian ice Cream, an organization set up by the government, set a minimum state standard for ice cream, allowing this company to increase its market leadership due to its high quality domestic ice cream.

However, there has been increasing competition from regional companies and foreign producers of ice cream, leading to erosion of the market share of Ice-Fili in the recent years. Nestle has emerged as the biggest threat among the foreign competitors and it seems to be well positioned to take market leadership in Russia in the future. There are other foreign companies such as Baskin & Robbins and Haagen-Dazs and small regional producers that have been gaining ground in the Russian market but are far weak compared to Nestle.

Ice-Fili has been distributing its products in the local market through several distribution channels including kiosks (50%), mini-marts (29%), restaurants (3%), supermarkets (2%) and gastronoms (1%). Nestle distributes its products via almost all distribution channels used by Ice-Fili while Baskin & Robbins mainly use franchised restaurants and café networks. The ice cream products of Ice-Fili are differentiable from those of foreign competitors due to the presence of high proportion of milk and fats and the absence of preservatives. Thus customers are able to substitute Ice-Fili products to the brands of competitors or ice cream to other foods that compete with ice cream products such as chocolates, yogurts, bear and soda.

Ice-Fili targets household and on-the-go consumption that takes place outdoors. The household consumption is less sensitive to fluctuations in seasonal demands unlike on-the-go consumption which usually decreases significantly during the winter. The consumers of Ice-Fili do not buy the ice cream products from the company directly. Rather, the buyers are the distribution channel members who then sell these products to the final consumers. The consumers of Ice-Fili products are price –sensitive and have a significant bargaining power. Usually, Ice-Fili returns transfer to buyers in form of lower prices. The purchasing power of the consumers of ice cream products are influenced by various factors such as the quality of the products, the relative volume of purchases, switching costs and the standardization of the products.

One advantage of Ice-Fili over competitors is that they offer mid-level prices which affordable to a larger section of the targeted consumer base. Further, this company pursues product differentiation strategy, focusing on high quality, product lines and experimental flavors. It capitalizes in an innovative branding methodology that combines traditional business goals with progressive social agenda to form a unique and attractive offering.

However, the foreign firms also have several advantages over Ice-Fili. First, they use newer equipment and packaging technology in the production of ice cream compared to Ice-Fili. Apart from that, they enjoy stronger financial support from the parent companies. They create an image of higher value of their foreign products, which justifies the higher cost that is paid by the consumers. In addition, they use chemical preservatives which help to increase shelf life of their products and to reduce wastage. Unlike Ice-Fili, these foreign rivals also use lower quality ingredients which translate to lower production costs. The strength of regional producers over Ice-Fili is that they use newer equipment and manufacturing facilities and they enjoy lower labor and rent costs since they are located away from metropolitan areas. For these reasons, Ice-Fili has continually been losing market share in Russia to these competitors.

In conclusion, Ice-Fili has been thriving in an increasingly economic environment. Though this company has held onto market leadership for a long time, recent changes has allowed foreign as well as regional competitors to gain ground in the Russian ice cream market. The competitive advantages of these companies over Ice-Fili have enabled them to snatch market share from Ice-Fili.