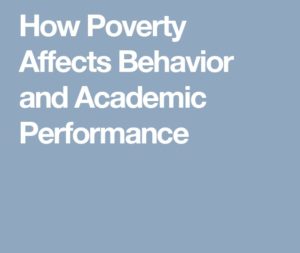 Numerous theories explain the differences in behavior and academic performance among children. However, the most dominant of these arguments supports the notion that behavior and academic performance stem from a blend of genetics and environment. According to the propagators of this theory, genetics begin the process and account for about thirty to fifty percent of the behavioral formation while the environment determines the remaining fifty to seventy percent. However, these assumptions are somewhat misleading.

Other factors like prenatal care and exposure to toxins and stress may also significantly affect a developing child. The environment in which humans live in affects the human cell receptors and sends messages to the genes that then affect several functional switches (Jensen, 2009). Different processes and cell structures are affected depending on the signals transmitted to the receptors and the functional switches that are turned on. As such, these functional controls can either strengthen or weaken violent behavior, body immunity, and learning and memory functions.

From recent research, it has been concluded that the intricate network of social relationships that students have with their colleagues in school, their family members, and other members of society significantly influences the behaviors. The influence process begins with the learner’s primary relationship with their parents or caregivers. This core relationship with the primary caregiver in their lives forms the child’s character that is either safe and emotionally involved or apprehensive and isolated (Martens et al., 2014).

Children who possess a safe and connected personality characteristically show better behavior in school. Similarly, children that possess an anxious and indifferent character typically exhibit bad behavior both in the home set up and in school. Once children are in school, their socialization, and social status tend to affect their behavior significantly. The typical school setting pressures students to be like their colleagues or risk group denunciation. Similarly, the pursuit for heightened social positions often pushes students to set themselves apart is some areas like sports or fashion.

Psychological and social instability is common in most children from low socioeconomic status backgrounds. Usually, the insecure and unstable bonds formed by infants from low-income family setups become the foundation for complete instability and insecurity in the early childhood year. For optimal brain development, children in their formative years, children require a friendly learning environment. Regrettably, in a low-income family setup, the environment is often full of adverse factors like inadequate health care, poor nutrition, and emotional stress. These unfavorable factors lead to decreased levels of childcare and later lead to poor academic and behavioral performance.

From birth, the nature of the bond between the child and their parent foretells the quality of future relationships with teachers and other children. Additionally, the bond assumes a significant role in the improvement of social functions like individuality and emotional regulation. For healthy emotional growth, infants need

Children from low socioeconomic status backgrounds are much less likely to have these essential requirements fulfilled than their more well-off peers. The result of the lack of these basic emotional needs is severe. Shortfalls in these areas lead to inhibition or decline in the production of new brain cells, altered development path, thus destabilizing their psychological and social growth and predisposing them to emotional dysfunction (Neville et al., 2013).

In a majority of low socioeconomic status families, parental education is low, family time is limited, and warm emotions are almost nonexistent; all which are elements that put the attunement process in jeopardy. Primary caregivers tend to be overworked, under lots of emotional and social status stress, and dictatorial with their children, employing the same punitive approaches used on them by their parents. As such, they often fail to form warm, sensitive, and healthy interactions with their children. Furthermore, low-income parents are unlikely to be familiar with or care where their children are in the neighborhood (Martens et al., 2014). Further, in most cases, they are not familiar with the identities of their children’s tutors or playmates. Research shows that only about thirty-six percent of parents from the low socioeconomic status background are involved in three or more school activities regularly, compared to fifty-nine percent of parents above the poverty line (Jensen, 2009).

Low socioeconomic status children are often at home by themselves as their parents work extra hours to try to make more money. As such, they usually spend a lot of time watching television and less time playing outside or engaging in after-school activities. Regrettably, watching television does not help in the emotional development of children as compared to personal interactions that the children from well-off families experience as they engage in outdoor activities with their peers.

Low socioeconomic status caregivers often experience weakened self-esteem and depression; emotional states, which they tend to pass on to their children through deficient nurturing and neglect. A study on psychological problems among low-income single mothers revealed that stress associated with poverty led to heightened dejection, which then led to increased instances of physical reprimand (Jensen, 2009)

Effects of Poverty on School Behavior and Academic Performance

Stable, secure, and healthy bonds lead to calm behaviors among children and provide the basis for lifelong social skills. Children who experience such relationships develop robust and suitable emotional responses to everyday conditions. However, for children from low-income families, this kind of ties hardly exist, and this affects their academic performance. For example, an emotionally dysfunctional child may easily get irritated and give up on their learning tasks just moments away from success. Additionally, the lack of social skills may affect a child’s ability to participate in groups activities, which are an integral part of learning and academic excellence.

While some teachers may construe student’ emotional and social deficiencies to be disrespectful, it would be of more important to recognize that students come to school with a constricted collection of emotions. Most children are such that their range of responses is limited and only react in a small number of ways. As such, it is vital that teachers and caregivers strive to teach emotions necessary for the smooth running of an elaborate social setup like a classroom. It is the role of the primary caregiver to show cooperation, patience, embarrassment, empathy, gratitude, sadness, and fear. However, as seen earlier, parents from low-income setups may not have the time to teach these emotions or they may be too emotionally stressed themselves (Neville et al., 2013). As such, this parental obligation is passed on to the teachers.

When such students come to school, they often bring with them three main relational forces. The first effect is the drive for stable relationships. The energy creates a needs a within the student; the need for a safe and reliable connection. However, because students from low-income families have often not experienced stable relationships, a lot of time is spent trying to create this bond with the teachers or peers. The second force is that of solidifying their age mates’ socialization. Socialization is the effort for recognition and approval that inspires children to emulate their colleagues and form clusters. Evidence indicates that it is colleagues and not caregivers, who possess the most significant impact on school going children. Unfortunately, for children who have not formed socialization skills at an early age, they end up withdrawing into their cocoons. As earlier seen, children from low-income families tend to lack socialization skills and therefore end up with weak social bonds with their peers. The lack of social relationships with peers exposes the children to poor academic performance because they have no friends to challenge or influence their educational achievement (Tomul & Polat, 2013). The final relational force that school going children exhibit is the pursuit for prominence and social status. This quest relates to the students’ need to feel special among other students. In a bid to emerge as winners, students normally seek roles that differentiate them from their peers. Again, this force is greatly influenced by the emotional health and social skills of a student. While an emotionally healthy child may be confident enough to take up a unique activity in order to feel special among peers, the same cannot be said about a child with emotional deficiency. As noted earlier, children from low-income homes tend to exhibit emotional distress as compared to those more affluent homes. As such, the students from a lower socioeconomic status background will be less likely to engage in social status uplifting activities. Lack of involvement and the need to feel special will ultimately affect the child’s self-esteem and consequently affect their learning and behavioral outcomes.

Each of the relational forces affects learning and behavior significantly. There is a complex relationship between cognition and emotional health and stability. When a child feels that they socially accepted, they tend to perform better academically. On the other hand, pushing students to perform well academically leads to a conflict between social and relational success.

While this essay focused primarily on the effects of poverty and social and emotional instability on the overall behavioral and academic performance of learners, it is to note that numerous other challenges exist. Some of these challenges include severe and prolonged stress, intellectual gaps, and health and welfare concerns.

Children from low-income household are exposed to both acute and chronic stress, and this affects their behavioral and academic performance. In this case, severe stress refers to stress caused by exposure to violence or abuse; which is significantly more prevalent in low-income households and neighborhoods. Exposure to these kinds of pressure over an extended period of time leads to chronic stress, which affects the children’s cognitive growth, social competence, and ultimately their academic performance.

Undoubtedly, children from low socioeconomic status backgrounds are more vulnerable to poor health and safety issues like poor nutrition, and inadequate health care services. To function at optimum levels, human bodies require being healthy. As such, children who lack proper nutrition and have no access to appropriate healthcare are more likely to under perform academically as compared to those who have access to these services. These health and safety issues within low-income household and neighborhoods often lead to high school absence rates, lengthy absences from school, and high lateness rates. All of these affect the learning process and eventually lead to poor academic performance.

While numerous studies reveal a relationship between the socioeconomic status of children and their behavioral and academic performance, undoubtedly not all children from low-income families exhibit poor behavioral and educational achievement. It is, however, important to note that a combination of detriments leads to the emergence of a complex web of adverse effects on students. The emotional and social instability more often than not stems from the primary caregivers who are either too busy working to try and make more money or are also stressed to think about their children and the need to create emotional relationships with them. It is additionally essential to realize that poverty and socioeconomic status infiltrates the body, personality, and brain of an individual.