How Companies Profit from War 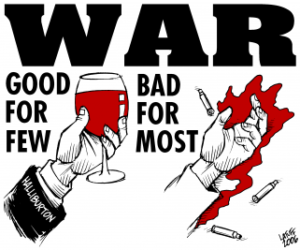 The Benefits of War

For every war that occurs or that is likely to occur, there are so many economic benefits it gives to a country. Although there are more dangers and deaths war brings. The United States had benefitted from different wars, most especially economically in both the World War I and World War II. According to Luce, war can be recognized as the operation defining the economic laws of nature with respect to the human family government. It is an effective occurrence that stimulated the growth of a government, it also solves insoluble problems of political and domestic economy, and also purges a country of its humors.

Conventionally, we can regard war as the malady of nations; it defines how terrible it is as a disease while it lasts, but it is purified in its results. War tries a nation, and also disciplines it, just the same way sickness tries and disciplines a person. Over time, war has been a source of art, science innovations, and a force that brings the natural gifts of a nation into play. It also shapens national character, people’s destiny and it is a spread of civilization sense. (“archive.org”) The trials that had occurred in the world today is what brought out the innovations that we see globally. If war had never been in place in the ancient years, countries all over the world wouldn’t explore sophisticated ammunitions and weaponry to secure their country.

The United States trade benefits from war. The United States earn some benefits from war through the imports and exports of goods and services. According to Nasar 1991, the United States had to borrow less than what they borrowed in 1990. A report at the time showed that the United States’ current account deficit was on a total of $99.3 billion in 1990, which slopes down from $110 billion as reported by New York Times in 1989. The smallest gaps were seen to be $99.3 billion since 1984. (Nasar, 1991) Additionally, gathering the kits to be used for the war during the time involved the US allies contributing about $51 billion, this was the money that should have been borrowed from other private investors in another country entirely. Also, the postwar that rebuilt in the Middle East intended to increase business for many American investors and construction companies, as well as equipment producers. The US arms manufacturers were expected to also benefit more, because different countries had to restock their arsenals. (Nasar, 1991)

Generally, other benefits of was include how lands are acquired during warfares. In the 1973 war that occurred in Israel, it enabled the possibilities of citizens to expand their territories and even boundaries; they were also able to settle in a formerly forbidden territory. In the same way, Chile took lands that closed off the Bolivian access close to the ocean, as well as the resulting ease of trade in South America. (“enotes.com, 2012”)

Companies that Profit from War

There is a very large profit from war. Worldwide military spends more on its prevention annually. According to a post from Huffington,  the 100 largest arms-producers have been able to sell a combination of $402 billion worth of arms, as well as military services in 2013. Many countries do not spend less than this. Although, this kind of military spending in Western and Central European and North American has continually declined, while countries like Russia and Brazil increase their investment in their military spending. Regardless of the global drop in the weapon purchase, there had been massive profits from its sales from its producers. The US and European companies are the major manufacturers of ammunition and they dominate the top 10 global companies in this arms deal. In 2013, it was recorded that Lockheed Martin led the global market in these sales of arms. This is based on the Stockholm International Peace research Institute rankings (SIPRI). (Lieberman & Frohlich, 2015)

Through these analyses, there had been a slight change to the difference in the 10 companies which lead the sales of ammunition round the world. A senior researcher at SIPRI, Dr. Samuel Perlo-Freeman explains that the big European and North American defense corporations have been able to position themselves among the top 10 arms dealers. Where the major competition is around the last two. (Frohlich & Lieberman, 2015) Furthermore, as the US companies dominate the arms industry by a wide margin, there are still other arms-producing companies that specialize in this arms sales. In the analysis posted on “247wall street,” it was recorded that 39 out of 100 of these top companies are based in the United States, and they accounted for more than 58% based on the total arms sales. The top 10 US company arms sales made up to 35% of the total sales within this top 100. On the contrary, Western European companies, make up the rest of the top 10 arms producers, and the analysis shows that they accounted for only 28% of the top 100 arms sales. Some of these companies are:

How did they Make Profits

These companies are specialized in the production, sales, and distribution of arms to government organization globally. Many of them also help the economy of their countries by increasing the capacity of their manufacture and the strategies they employ in the sales and distribution of arms. These military equipments are sophisticated ones that cost millions of dollars and are sold to different countries all over the world.

As identified by 24/7 Wall Street, it is seen that these top 10 companies are the most arms sales and this is based on the SIPRI’s ranking and analysis.  Some of the arms sales include advisory, vehicles, planes, and weapons. These are sold to military customers, and also contracts to government militaries. (Lieberman & Frohlich, 2015)

How the International Markets Are Affected By War

There are many effect of war on the international market, and this ranges from the arms sales, oil effect, stock prices, technological developments, depressed economic growth, and disrupted market.

Due to how expensive war is, relative to money and other resources, it is also very destructive, relative to capital and human capital, and it is disruptive, relative to trade, labor management, and resource availability). These effects can affect the international market in one way or the other. Most especially large wars that constitute serious shocks to the economies of developed countries. (Goldstein, 2004) This kind of war could sometimes lead to a global economic meltdown.

War could lead to the increase in oil prices. Participating countries in a warfare may decide to take hold of their oil distribution agency and shut the movement of oil from one country to the other. Thereby causing scarcities and thus, inflation in the prices of stocks and the oil itself. During the Iraq war in 2003, the prices of oil rose steadily within the three months the war began. The oil rose to 40% that period and was then sold around $25 from its initial price of $18. (Isidore, 2013)