Bohat ALA
Home Projects/Reports Hellenistic Age of Alexander the Great

It is arguable to say that the greatest scientific development era in history is the Hellenistic age, which highlighted many people, places, and events as important to one of the greatest histories 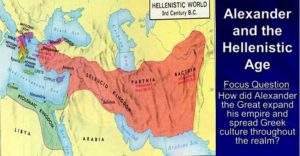 of our planet. This was a period where Alexander the Great was hungry for power, precisely around 323 BC, and his influence continually spread far and wide. His vast empire was divided into several different kingdoms, symbolizing the tendencies and thoughts of the artists in the Hellenistic era. The Hellenistic period wouldn’t have experienced a significant cultural advancement and led to Western civilization if not for the combination of the Greek and Asian culture, as well as the scientific royal patronage, thus, bringing great enhancement and influences on the Hellenistic culture and its spread. Because, Alexander the Great conquered territories, made great successes from kingdom-building strategy, and united people from different culture together, we can agree that Alexander the Great was really great and the Hellenistic age culture advanced Western Civilization.

In Alexader’s 15 years of conquest, he never lost any battle. Alexander the great was taught by Aristotle, a man, who his father hired to train and educate Alexander when he was only 13-years old, where he started expanding his knowledge and more skills. Thus, he was equipped with sophisticated military strategies and tactics, which are being studied in many military academies today. According to “Documentary Tube.com,” one of his greatest achievement was the fact that his 15 years of war never encountered any loss of the battle and he conquered about half of the ancient world, and his kingdom spread into Egypt, India, Iran, and even Pakistan. He earned his first victory when he was 18-years, gaining a reputation and leading is men to battle with a swift mode of operation, allowing the smaller forces to access and break the enemy lines before his enemies were prepared. In 334 B.C., he succeeded in securing his kingdom in Greece and migrated into Asia (the present-day Turkey) where he was victorious in various series of battles along with the Persians under Darius III. Also, after his father’s death, Alexander did the unimaginable, as he attacked the Ancient Persia with about 50,000 soldiers, and with all battles with Egypt and Syria, he never lost a single battle. He made sure he combined great strategy, tactics, ferociousness, and well experienced soldiers in his host of warriors.

Furthermore, Alexander renamed and founded over 70 cities after himself one city after his horse. Between 336 BC and 323 BC, the cities conquered by Alexander the Great were attributed to his victory, from one region to another, people to another; he named series of cities for himself. According to Kuschk (2012), these cities were the places thousands of veteran soldiers that followed him from through the Middle East and the South Asia. Basically, many of these cities in which he named Alexandria were built up around previously owned military forts. (Barksdale, 2014) More so, many of them still persist today, but some with different names, others retain versions of their original name sourced from Alexander. (Kuschk, 2012) The most famous of these cities, which in 331 B.C., was founded at the mouth of the Nile is regarded as second largest city is Egypt. Other Alexandrias can be traced through the path of present day Iran, Afghanistan, Turkey, Pakistan, and Tajikistan. Alexander also founded the city of Bucephala, in which he names after his favorite horse, located near the site of the battle and close to river Hydraspes, which was one of his costliest victories of Alexander’s Indian campaign.

Additionally, Alexander’s battles were won with an undisputed military genius. Alexander was very skilled and also had strong managerial skills to select the most intelligent military troops. According to “A+E Network,” he meliorated the fine army, he inherited from his father, by adding more allied forces; he empowered the cavalry arm, using the best weapons specialists, and engaged a corps of engineers. He made himself invisible at every siege warfare and position battles. History also has it that Alexander was marked by seed; his intelligence, logical, and clear communications operations were never flawless to the time; typically, his ability to improvise at any prospective flaws was unrivaled. However, in every strategy in employed, he was totally careful. He doesn’t just strike deep into Asia spontaneously, he spent close to two years fortifying the coastal areas of the Levant and the Asia Minor to make sure that Persian naval force would be incapable to interdict his formation and arrangement to Europe. He gradually wore away the Persian Empire sections before migrating into Mesopotamia and the Iranian plateau.

Moreover, Alexander’s conquests developed a legend that other leaders followed in their careers. Emperors, generals, and kings at the time saw Alexander’s greatness and strategy as something to emulate. Controversially, they discovered that they couldn’t comprehend competing with the legend and hence, had to emulate him. Some of these leaders include Charlemagne, Antiochus the Great, and Caracalla, Pompey the Great, Severus Alexander, and Nero, to mention only a few. These people and many others saw the need to emulate the provided standards by which other leaders measured and quantified their careers. Most importantly, Alexander’s career is a metaphorical achievement that had attained the modern times. Not only that, he was regarded as a skilled hero, a character in fables and epics across different cultures in North Africa and Asia, others regarded him as a god, two-horned demon, and a beast. (Ranjan, 2011) Indians refer to him as ‘Sikandar’ which is synonymous with being the ace, the best, and the invincible. In addition to this, the Hindis loosely translate a proverb meaning that says ‘Anyone who wins is called Alexander’. Lastly, in which ever ay he was viewed, whether as a hero or a kind of a bloodthirsty villain, who because of victory brought destruction and death wherever he went, people still find it difficult to argue his level of magnetism, which he attained as a result of his leadership skills, warrior, and his rigid will and determination.

In the same vein, the Hellenistic age culture that revolved around Alexander the Great also influenced the Western civilization. Western civilization and its accompanied ideologies have been primarily influenced by Greek thinking and philosophy around the 4th and 5th century BCE. Aside this fact that the Greek helped modern Western Civilization understand their philosophy, theology, and cosmogony, they’ve also imparted huge influences in the sectors such as their various forms of science, social, and governance. According to Rajib Mukherjee, classical Greece’s melting ideas emancipated from all nooks and crannies of the ancient world and was a great influence on its own existence too. This is because, they devised advanced mathematics, and used their scientific reasoning to proffer answers to everything that surrounds them, ranging from the use of the use of the Golden Ratio in the construction of magnificent structures. An example of this is the Parthenon, built during the Greek Classical Era in the 5t century BCE as a tribute meant for the patron deity Athena. Their creativity was based on their philosophy and philosophy is the root of every human endeavor, scientific or otherwise.

In summary, the Western Civilization can be agreeably sourced from the Hellenistic culture, with different works that now exists today, these are origins of what we live with in the Western world, and they are the basics of the present day advancement. Great works from people like Callimachus, an Alexandrian scholar-poet, Theocritus, the one who wrote pastorals based on natural beauty, and more. Additionally, the philosophy of the time demonstrated new awareness of a person. In science, the Greek scientific achievement was at its peak during the Hellenistic Age, for example, Alexander the Great hired engineers, surveyors, etc. Also, the Hellenistic scientists also attempted rational analysis of nature; the Alexandrian library had leading scholars and thus, led to a research institution. Alexandrian doctors enhanced medical skills through experimentation and observation.

Their knowledge of astronomy and mathematics was not left out. This increased sufficiently. From Aristarchus, an astronomer in the 18th century before Copernicus was the one that said the sun existed at the center of the universe, he also argued about the planets revolving around the sun, he was the one who also claimed that the stars situates at the greatest distance from the earth, and more. In addition to this, Euclid was an Alexandrian mathematician who applied strict reasoning to geometry and Archides of Syracuse as an inventor, mathematician, and a physicist. Moreover, Geographic research was expanded, including the knowledge of earth, zones, circumference, etc.

Conclusively, this study had been able to establish the fact that Alexander’s years of existence demonstrated how great he was, even up to his death, he smelled greatness, according to Barksdale (2014), after 400 years of his death, an agreeable odor exuded out from his skin and his body perceived great fragrance. The Hellenistic era also established a quantifiable level of Western Civilization, as shown above, many of the theories, experiments, and observations, we are undergoing today is as a result of the basics and foundations of the Greek era, ranging from typical Philosophy, Epicureanism, Stoicism, Skepticism, and Cynicism. The Hellenistic age legacy will continue to thrive in our Western world. The period between the Alexander’s death and the Roman Empire formation, the Greek civilization continually spread through to the east and west. Even Christianity resonates with Stoic concepts of human equality, the concept of people’s rights.