In the United States and the other countries, students underage drinking is the serious public health problem because alcohol is the widely used substance among the America’s youth population. Young people poses to suffer the issues of the enormous health and the safety risks. Thus, the students are creating issues, as they are doing the violence, property damage, injuries etc. The students are facing the tensions of the aggressive behavior because drinking could affect everyone. It is estimated that the underage drinking cost in the United States was about $24.3 billion in the year 2010. However, in year 2015 the examined trends were that the U.S. high school students are doing the binge drinking intensity and there is the high intensity of the health risk behaviors. The survey is based on the 9th–12th grade students as there is the high prevalence of student drinking or the binge drinking. In 2016 among the 12th grade students there were about 42.4% of the alcohol drinkers and among 9th grade students there were about 23.4% of the alcohol drinkers (Pubs.niaaa.nih.gov, 2017).

Drinking pattern also vary by gender and age, however, girls and boys both are indulge in the binge drinking but boys are greater in percentage as compared to the girls. 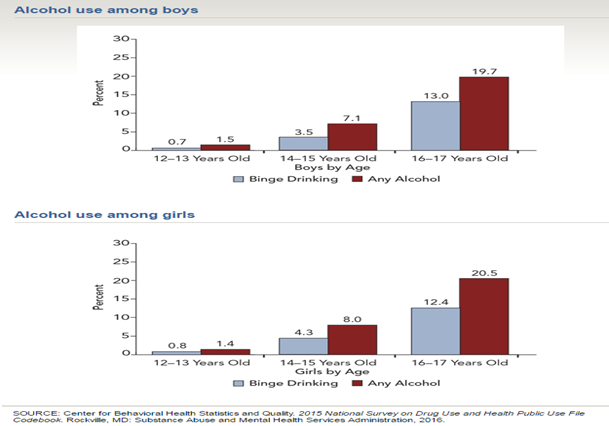 Past month trends among the students of grade 8, grade 10 and grade 12:

Underage drinking is dangerous because there can be the risks and negative consequences drinking poses. There could be many deaths because of drinking alcohol. Student due to the alcohol drink are facing the physical issues and the sexual assault, maturation and development can impact on their personality and the students can face or experience other serious problems in their health status. Binge drinking is becoming the serious problem, as it could restrict the brain development of the students and they cannot pay attention to their studies, however, the binge drinking is the excessive drinking that is within about 2 hours. Students are starting the drinking because of the peer pressure, stress or other factors including the social factors and the environmental factors.

Gap In The Current Study Systems

There are several gaps in the studies as the public health perspectives are not focused especially in the students, students are not given the awareness at the early ages that how binge drinking can impact on their health status. Thus, the students are facing the severe disorders due to the excessive drinking, the major gap in the study is the optimal treatment strategies that there are not enough services for the students and based on the reason students are suffering from the severe alcohol dependence.

Limitation Of The Problem Analysis

The work plan for the Michigan Nutrition Network is focused through considering the monthly expenses. The application include the detailed and logical program work plan, which is done monthly for the 1 year plan, the plan reflect the program objectives and the appropriate staffing that is given below in the budgeting. The components are linked together because the work plan provide the tools and the expenses for the activities that are important for measuring the progress, in this way the work plan is consistent with the budget.

Through estimating the 1 year budget for the Michigan Nutrition Network, there is needed to get the Grants of minimum $500,000 for the Health Improvement Special Projects from the National Institutes of Health (NIH) Department of Health and Human Services. However, grants from other sources need to be focused so that there could be proper education services for the students of Michigan schools. With the minimum salary ranges of the staff per year and with the home delivery meals for our customers we have got the total of $474,750 excluding the indirect cost. Moreover, it is necessary to get the maximum advantage from the governmental institutes in order to get the benefits. The budget reflect the total cost of the proposed program also including the in-kind costs, thus, in this way the customers could be served in the appropriate way and the education of health facilities can be provided to the students. 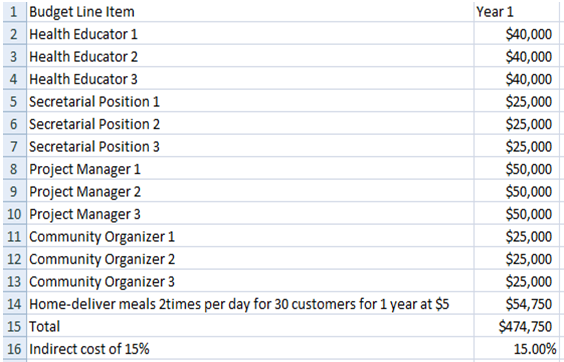 Moreover, the request is reasonable because our institute is going to offer good program with the combination of the efforts for the students so that awareness could be given regarding binge drinking cause the health issues. There could be limitation in overhead cost; with the overhead cost that is paid with proposal funds will able to include the level of supervisory staff and their efforts and would allow the administration to be consistent if the budget implemented effectively as estimated.