The output of Frank Gehry architectural work are the most outstanding and creative designs that reflect various aspects of modernity. This is because he constructs buildings in such a way that their shapes imitate the images of objects that are in existence in the world. The designs of such building are also built so that they also depict the kind of activities that are carried out in such premises. Besides, they represent the cultures of the people in such particular places. Moreover, the kind of materials used in the construction portrays different forms of creativity in the construction industry (Drew, 2015). Apart from his personal achievements, Frank Gehry has also has helped the world to attain some degree of progress in the construction industries by implementing distinctive designs of buildings that could only be thought of in the imaginative world but not in reality. An example of such work is the Tower Eight Spruce Streets that is built on stainless steel and glass exterior extending to 76 stories.

Frank Gehry is a deconstructivist. This is because of his styles of buildings and architectural designs that reflect 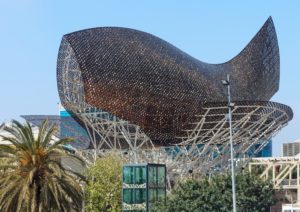 radical freedom which is represented in different forms and shapes. Examples of such works that reveals the various forms of freedom include the Dancing House in Prague that was constructed in 1996 and the Museum of Pop Culture in Seattle that is built in such a way that it exuberates the pop culture. It is due to this degree of freedom that Frank Gehry uses in his designs and constructions to conform with the planned activities in the buildings and the nature of the surrounding environment that has attracted numerous critics to his works (Memarian & Naghizadeh, 2016). However, some of the rival architects have criticized Gehry in that, his designs are very expensive and do not take into considerations the available resources, the local climate, creation of functionless forms.

I consider Frank Gehry to be renegade thinker who has created his personal styles. This is because most of his designs reflect a high degree of creativity that has been implemented in the form of buildings and other designs. One such example is the Guggenheim Museum in Bilbao that was devised in the shape of a legendary artifact. After having received much criticism on the cost effect of the structure, it generated more income immediately it was opened and thus influencing the construction of similar structures in the other places.

It’s very simple to find out any matter on net as compared to textbooks,
as I found this paragraph at this web site.