The efforts are there for food security and grain imports are done, in order to feed the people of the other countries, especially the people of the developed countries, because the efforts are done in the agricultural segments of the countries for the food for export. In the agricultural production, there can be issue as within the exports there can be the fluctuations in the market prices. The food security is focused by various departments in the U.S and the other multi-national corporations including the trans-national corporations, so that there could be the advantages of the health and sustainability in the developing world. Thus, the macro-economic issues could be there in the countries, consisting of the food security, from the agricultural phenomena, issues can be there in the geographical approaches because developed and the developing countries can face the extreme food insecurity. Thus, in the United States, there is the urban poverty; stay focused on the standards of food security there is less security because the food is at the higher prices and many of the people cannot afford the prices of the healthy food. Concerning the economic issues in the U.S, it is a developed country; still there are the issues, in the developing or third world countries, because they have scare resources, however, they can get food at the low prices. Both the developed and developing countries are facing the tensions of the political issues, example the GATT and the WTO. Countries are also facing the tensions of the trade barriers example; Donald Trump has made different legislations on the imports and there are the trade barriers, as countries are focused to make better social contracts with the first world countries.

The Significance of Food Security and Regional Resilience

Africa is known, as the net importer of the food in the various countries, as the agricultural is vast 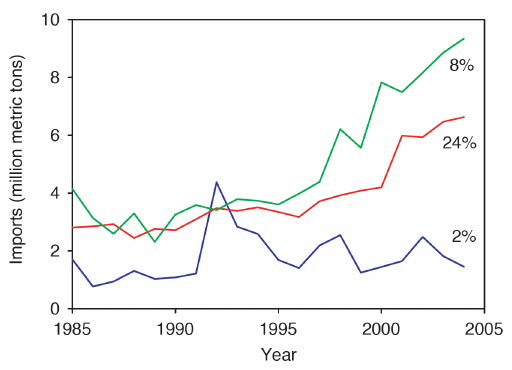 potential of the country, moreover, in the period of 1960-2007. There was the major agricultural productivity in the country and the from the year 2000 and 2005 there was the increase in the per capita income of the people of households and the people, example, USD 185 per. In the year, 1980 the country has grown consistently and by the year 2007, Africa has made the high records on the livestock products and the cereals. Therefore, from the years 1980 and 2007, there was the increase in the net food imports by the average of the 3.4 percent because the country has also started the trading of the fruits and vegetables regarding the cereal import values in the real terms. Thus, in the 1970’s there was the increase in the highest net food of imports. Africa is the famous country in making the grain and dealing with the issues of the food security, because it is in the low-income countries and do the efforts in order to give the quality food to the other developed countries, in this way, the economy and agriculture sector of Africa and Sub-Saharan Africa grows. Furthermore, the export revenues are high because there is the population growth that supports the food production to grow. Moreover, in Africa there is the growth of food consumption as the per capita income of the people are high, there is still weak economic growth in country, as the food expense and the household income is high in the people of Africa and Sub-Saharan Africa. Africa has better domestic production this is reason that people of Africa believes on food security and on providing the quality food all over the world, Africa’s population is feeding the developed and developed countries and there are the increase in imports. However, the country has the better agricultural productivity and this is the reason that the households in Africa are getting good food. South Africa has the internal and external agricultural policies, based on the reasons, Africa in recent years cannot achieved target as it achieve in year 2007, because the taxation on food production have made the exports and imports difficult in Africa and Sub-Saharan Africa. Taxes have affected the food productivity; however, the country is doing the successful practices so that there could be effectively and growth in the African agriculture, thus, the domestic food production is focused on the agricultural productivity. In the African agriculture and the Sub-Saharan Africa there is the focus on the raw commodities, so that the export revenue.

The grain resilience is supported much in the country Africa, as the agricultural has the enormous benefits and there is the increase in the net food imports by the average of the 3.4 percent, this mean that the country is improving the national, domestic and the international market. In the Sub-Saharan Africa, there is greatest and the largest support of the country trade partners, however, in the 2015 there was the increase by the 3–4% yearly because the GDP growth has arises in the country. Moreover, by the 2016 there was the greater self-sufficiency because the growth of the crops has increased by the central African countries. Africa has the greater benefits in the country domestic markets because the domestic supply shocks and the international markets give the benefits and revenue to the government and people, thus, there is the natural resource availability that promotes the specializing production of the crops.

The political environments of Africa are supportive and there is focus on to provide the strong human capital so that the country could get the large share or support of the GDP. In the region of Nigeria there is better focus on the crops, so that there could be agriculture benefits, Nigeria is fulfill the oil goal as well as the agriculture production goals for the Sub-Saharan Africa. The grain optimization, is giving the several benefits to the highest net food of imports. Africa is well known about the advantages that could be there by the developed countries. However, Africa is getting advantages in many ways as Africa, Sub-Saharan Africa grows the best quality food all over the world, and country is well aware of the growth perspectives. Thus, in the African agriculture there is focus on the global food security as improvement so that the grain optimization and resilience can increase the current trends of the Africa agricultural. The country is providing the increase in the productivity, as there are the attempts to change trends so that the country could grow and increase in the production. Moreover, the Sub-Saharan Africa is to facilitate the food security by the help of the international research organizations so that better productivity can be there in the country and better economic and food security can be focused in the countries. There country has the better conditions of the household political, geographical and the other economic factors because the support is there in the country. Africa is managing the agricultural crisis and aware of the modern capitalist economies in the home agricultural segment, thus, it provides the better individual knowledge because the countries have the awareness’ regarding the Sub-Saharan Africa crops and the healthy eating. The country is getting the healthy food in the country. However, there are the barriers, which the country has to face in the market, there is support to the trade but the barriers by the other countries always focused on the environmental protection and sometimes not provide the opportunities to farmers of Africa to get the better advantages of their own crop (Vanlauwea, Wendt, Giller, Corbeels, & Gerardf, 2013).